JohnRice said:
Ya know Robert, I might be letting the mob mentality get to me over the years. I thought it was odd, possibly poorly written, but I also liked it, despite some failings in the execution. The fact is, I haven't seen it in years. I need to give it a shot and find out what I think today, for myself.
Click to expand...

Even though I like the film, part of the problem I have with it is it's length. I like the brutality in the movie, but they could've edited the film down some.
Expand signature
Crawdaddy's favorite "The Mandalorian" Quotes: "This is the Way" and "I have Spoken"

Well, currently it's for rent on Prime for $2. Maybe it's worth giving a shot after all these years. I should have a couple $ of digital credit with them, actually.

I came across a photo of Ziva Rodann yesterday which set me thinking and so I watched Last Train From Gun Hill last night. (She plays the assaulted and murdered wife in the opening sequence) John Sturges was on top form when he made this film. He drew good performances from the entire cast and his compositions are consistently good and some are superb.

Last Train From Gun Hill is a VistaVision movie and the DVD is pretty good. As Paramount have very recently released a couple of Blu-ray discs, they should continue by putting this film out on Blu-ray too.
Reactions: Jeff Flugel, Rodney and Robert Crawford

I took a quick break from binging the entire series run of Gilmore Girls for this: The Dog in the Dentist Chair -- the new book by Peggy Frezon
Reactions: dana martin, Jeff Flugel, atcolomb and 1 other person

Sapporo: Winter Olympic Games 1972 (Criterion BD). Another beautifully produced and shot documentary on the games.
Bergman: Life and Work (Criterion BD) A TV documentary by Jorn Donner interviewing his subject (Ingmar Bergman) for 90 minutes.
George Washington Slept Here (TCM app) 1942. I hadn't seen this delightful comedy since I was a child (TV with Spanish subtitles). I didn't understand a lot of the topical humor, nor did I know Jack Benny. Well, I have to say that I really did enjoy this movie, even more so with the sighting of Pepi Katona.
The Green Goddess (TCM app) 1929. Having just watched the 1922 version with Arliss and Joyce, I decided to rewatch the remake, mercifully shorter. Arliss and Joyce reteam and play well together. Arliss also gets to utter the final line with relish and utters the word "damn," bowdlerized in the silent version. That's right: "damn," a full 10 years before Rhett Butler.
Reactions: Jeff Flugel I'm thinking about taking a couple months, or more, to do a Bond beginning to end. I've never done that. Has anyone else? I'd spread it out with other stuff, so I don't get tired of them.
Reactions: Jeff Flugel

'm thinking about taking a couple months, or more, to do a Bond beginning to end. I've never done that. Has anyone else? I'd spread it out with other stuff, so I don't get tired of them.
Click to expand...

I have before I picked up the Daniel Craig set on 4K Blu-ray. I watched them in order and I did mix in some other movies but mostly watched all the 007 movies till I was done. Part of it that helped is for me that Bond is not played by the same actor for most or all the movies and the mix helps me not burn out of watching the saga.
Expand signature
HT System: Marantz SR-8012 11.2 (7.2.4) Receiver, Emotiva XPA-3 3 Channel Amplifier, Sony XBR55A9F 55"OLED 4K HDR/Dolby Vision/IMAX Enhanced TV, Panasonic DP-UB9000 4K UHD Blu-ray Player, 4K Apple TV 64GB, Speakers: Altec Lancing A-7's (L&R), Klipsch RC-64 lll center channel, Klipsch RP-600M surround speakers, Advent Marbles (height speakers), HSU VTF-3 MK5HP subwoofer. AudioQuest cables, Pangea Audio speaker stands, Harmony Elite Remote.
Reactions: Jeff Flugel

Today I started the new Amazon Prime series Hunters about Jewish Nazi hunters in 1977. There are ten episodes in this series, and the first was 90 minutes! The rest appear to be an hour in length, but this first one where we met some good and bad guys to keep our eyes on throughout the series seemed more like a movie. Al Pacino stars.

Matt Hough said:
Today I started the new Amazon Prime series Hunters about Jewish Nazi hunters in 1977. There are ten episodes in this series, and the first was 90 minutes! The rest appear to be an hour in length, but this first one where we met some good and bad guys to keep our eyes on throughout the series seemed more like a movie. Al Pacino stars.
Click to expand...

Yeah, I'm interested in this series. Is it good?
Expand signature
Crawdaddy's favorite "The Mandalorian" Quotes: "This is the Way" and "I have Spoken"

Peg and I just finished binging all 7+ seasons of Gilmore Girls (including the Netflix reboot) over the last seven weeks:

This is probably our fifth or sixth time watching the entire series all the way through. Can't recommend it highly enough to anyone who hasn't seen it.
Expand signature
There's Jessie the yodeling cowgirl. Bullseye, he's Woody's horse. Pete the old prospector. And, Woody, the man himself.Of course, it's time for Woody's RoundUp. He's the very best! He's the rootinest, tootinest cowboy in the wild, wild west!

The Dog in the Dentist Chair -- the new book by Peggy Frezon
Reactions: Jeff Flugel, Dave Moritz and TravisR

The first episode was pretty graphic and unsettling, but it held me captive for the entire 90 minutes and served as a good set-up for the rest of the run. I'll have maybe a better feel for the show after I watch episode two today.

Matt Hough said:
The first episode was pretty graphic and unsettling, but it held me captive for the entire 90 minutes and served as a good set-up for the rest of the run. I'll have maybe a better feel for the show after I watch episode two today.
Click to expand...

I don't know why I'm asking as I still have on my DVR Watchmen and Outsider without seeing a single episode of either series.
Expand signature
Crawdaddy's favorite "The Mandalorian" Quotes: "This is the Way" and "I have Spoken" 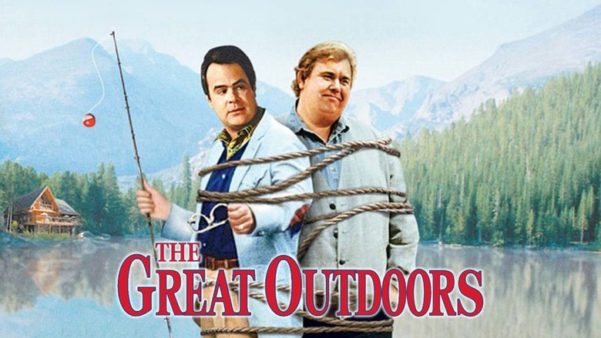 Sometimes you just get tired of brainless fluff and have to go to the deep artistic stuff - this wasn't one of them. Just fun mindless comedy and just what we needed right now.
Reactions: Jeff Flugel and Dave Moritz

The announcement of a forthcoming Blu-ray disc of Dodsworth plus discussion of a TCM documentary about Mary Astor put me in the mood to watch one of her films last night. So I watched The Great Lie where she plays a selfish and temperamental concert virtuoso. Bette Davis was the nominal star and gave her usual high octane performance but Mary Astor achieved more while doing less. I think Bette Davis later acknowledged that Mary Astor gave the better performance.

I'm in the mood for some extra-marital temptation - strictly on screen, of course as I'm a bit old for that in real life - so today I'll probably watch either Strangers When We Meet or Brief Encounter.
Last edited: Feb 22, 2020

Very busy since I last posted. As usual, listed in the order watched:
Visions of Eight (Criterion BD) 1973. The 1972 Munich Olympic Games as viewed by 8 internationally renowned directors. Not interested in names, scores, the usual things that we view in these documentaries. It touches slightly, but movingly, on the tragedy that marred these games.
Doctor Sleep: Director's Cut (Vudu UHD) The only way I could access the director's cut. My wife and I enjoyed this and were engrossed throughout the entire running time.
Brink of Life (Criterion BD) 1958. Bergman directing a group of women in a hospital ward. Very humanistic, very real. The women playing the expectant mothers and the head nurse won Best Actress at Cannes. Bergman won Best Director. New scan in 2017 so it looked gorgeous.
Next day:
Mister Buddwing (TCM app) 1966. James Garner suffers from amnesia and meets many interesting women on the road to recovery: Angela Lansbury (great), Katharine Ross (so young), Suzanne Pleshette (sigh), Jean Simmons (double sigh and brilliant). I hadn't seen this since its first run. Interesting but not great.
It Happened Tomorrow (TCM app) 1944. Rene Clair directs Linda Darnell. That's enough for me. Last saw this in a beautiful print way back in the '70s. This is a fantastical comedy that deserves to be better known. The last half hour is particularly inspired, and it is a short film. Recommended.
Next day:
Yella (Criterion Channel) 2007. The extraordinary German actress Nina Hoss delivers once again. Christian Petzold directs with assured hand. There's a twist at the end that I can't reveal.
More to follow.
Reactions: Jeff Flugel, Robin9 and Robert Crawford

Continuing with the same evening's viewing:
Jerichow (Criterion Channel) 2008. More Petzold and Hess, this time a variation of The Postman Always Rings Twice. Another well-made film that deserves more recognition. This same pair went on to make the extraordinary Phoenix a few years ago (a Criterion release).
Dr. Ehrlich's Magic Bullet (TCM app) 1940. Edward G. Robinson as Dr. Ehrlich saving mankind from syphilis. Well directed by William Dieterle and shot by the great James Wong Howe. Last saw this as a child (literally) and my mother had to explain all about, ahem, social diseases, but not about how to contract them.
Honky Tonk Freeway (Criterion Channel) 1981. John Schlesinger's satire was savaged by the critics and the audience when it opened. Well, my wife and I had a great time watching it and laughed out loud throughout, whereas we barely chuckled during Mad World. Go figure.
A Warm December (TCM app) 1973. Poitier directed and stars in this romance opposite gorgeous Ester Anderson. He's a widower with a child; she's afflicted with sickle cell anemia. Courageous film for tackling difficult subject matter at that time. Bittersweet ending.
Reactions: Jeff Flugel and Robert Crawford

I started watching The X Files for the first time. The initial 11 season run is on sale for $25(!) on iTunes. Believe it or not, the conversion from 4:3 SD to 16:9 HD is excellent. Yeah, I can hardly believe it too.