Perhaps the most recognizable and influential cheerleader for film preservation and proper projection in the world today is Academy Award-winning director Martin Scorsese. In 2007, he began his World Cinema Project, a group that spends time scouring the planet for films in dire need of rescue and restoration. This new Criterion box set Martin Scorsese’s World Cinema Project presents the results of six of his organization’s restoration projects, films little seen from around the world and selected for their international reputations and appeal representing the diverse cultural heritages from Senegal to Bengal, Turkey to Mexico, and Morocco to Korea. 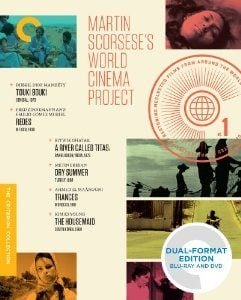 Touki Bouki – 4/5The film’s 1.37:1 aspect ratio is delivered in a 1080p transfer using the AVC codec (resolution and corresponding codec are the same for all six films in this set). Sharpness is very good, and color is deeply saturated (reds tend to bleed just a touch especially on a fiery red truck driven through town) with realistic flesh tones the rule. There is occasionally a tinge of brown to the image, but that’s not consistent nor are a few scenes which seem to have been just a bit dark on their way to Blu-ray. But the restoration has removed all traces of time from this 1973 film resulting in a clean and clear transfer. The white subtitles are easy to read. The film has been divided into 18 chapters.Redes – 2.5/5The 1.37:1 theatrical aspect ratio is retained here. Brought back into existence from only two existing prints, sharpness is rather admirable throughout, and the grayscale is good, too, with its crisp whites and more impressive black levels than one might expect from a 1936 film this damaged. But there isn’t much of the movie that doesn’t show black and white scratches and some damage and spotting. It’s rather constant and sometimes a bit distracting. The white subtitles are very easy to read. The movie has been divided into 14 chapters.Dry Summer – 4.5/5The 1.33:1 theatrical aspect ratio offers a gorgeous grayscale rendering with impressive black levels and clean whites. Sharpness is outstanding throughout with some exceptional deep focus photography and with contrast dialed in perfectly. There is a slight lighter vertical band running down the right side of the frame for part of the running time, but that’s the only notable artifact. The white subtitles are clearly printed and easy to read. The film has been divided into 20 chapters.A River Called Titas – 2.5/5The 1.37:1 transfer is a real bundle of problems. About one-fifth of the film looks pristine with a gorgeous grayscale and expert sharpness (this comes about an hour into the movie for a nice stretch of time). Otherwise, though, the image is plagued by scratches, some light and some heavy, emulsion damage, gate jitter, softness that doesn’t appear to be deliberate, and mediocre blacks and blown out whites. White subtitles are easy to read, and the movie has been divided into 30 chapters.Trances – 4/5Filmed in 16mm, the 1.66:1 transfer looks very much a part of its era (1981). Some shots can be sharp while others are soft; color can vary from strong to rather lackluster. Black levels are acceptable but no more. But the image is clean and clear, and there are no age-related artifacts to mar the viewing experience. The white subtitles can be read easily, and the movie has been divided into 17 chapters.The Housemaid – 3/5The 1.66:1 transfer was taken from the camera negative except for two missing reels which had to be restored as well as possible from a battered print with large English subtitles which had to be digitally removed. So, 70% of the film looks spotless: clear, sharp, detailed, and with striking grayscale which boasts clear whites and good black levels. But those two missing reels are like night and day in terms of viewability. Digitally harsh with amped contrast and yet a faded picture, scratch laden and with missing frames, those scenes are a trial to endure until the picture straightens out again. The two missing reels were not back-to-back reels, so the viewer has a spotless picture for about 45 minutes which is then interrupted by an appalling image for eleven minutes or so only to go back to something beautiful again and then a further descent into mediocrity until that reel eventually concludes and the film returns to something beautiful for its ending. The white subtitles are easy to read. The film has been divided into 17 chapters.

Touki Bouki – 4/5The PCM 1.0 sound mix (1.1 Mbps, the same bitrate which is found on all six films in the set) features better than expected fidelity and just a tiny trace of hiss. Director Djibril Diop Mambety has used pop tunes to complement his visual ideas, and they resonate quite nicely ("Paris! Paris! Paris!" is repeated several times during the movie since that’s the destination of the two young people). The dialogue has mostly been post-synched, but there is no problem at all with the dialogue, music, and sound effects occupying the same track.Redes – 2.5/5The PCM 1.0 sound mix features Sylvestre Revueltas’ stirring music with adequate fidelity, but when the microphones are turned on to record the post-synched dialogue, hiss and some attenuated crackle are pretty constant companions. The dialogue, music, and sound effects all exist comfortably enough in the same track, but this oldest of the films in this set certainly shows its age despite all the best efforts of the restorers and Criterion’s engineers to bring it back to life.Dry Summer – 4/5The PCM 1.0 sound mix offers the post-synched dialogue sounding very canned and with little variety. The music and sound effects also occupy the mono track agreeably with the dialogue.A River Called Titas – 4/5The PCM 1.0 sound mix expertly weaves the dialogue, sound effects, and near-constant music without any of them intruding on the other. The film, except for one brief passage of direct recording (which has some hiss attached), was post-synched, and the unvarying nature in the tones of voices and the sometimes tinny Foley effects makes for a somewhat monotonous listening experience.Trances – 3.5/5The PCM 1.0 sound mix is clear but rather lackluster for a music-based movie. There’s not a great amount of resonance with the sound, but likely that’s due to the small budget and the dated original elements. There is no hiss or any other problematic sound anomalies that jar the listening experience.The Housemaid – 4/5The PCM 1.0 sound mix is typical for its era, but fidelity is quite good for the music which blares ominous chords at regular intervals when something heinous happens or is about to happen. The dialogue is not compromised by the music or sound effects, but the dialogue was post-synched, so there is that monotonous sameness of recording level which gives the track a rather lifeless ambiance.

Touki BoukiMartin Scorsese Introduction (2:16, HD)Abderrahmane Sissako Interview (11:56, HD): the filmmaker offers an informed video critique of the film.RedesMartin Scorsese Introduction (1:57, HD)Visual Essay (7:43, HD): Kent Jones has written an informative history of the project with his script read by Bruni Burres.Dry SummerMartin Scorsese Introduction (2:03, HD)Metin Erksan/Fatih Akin Interview (15:03, HD): two directors who have each won the Golden Bear at the Berlin Film Festival discuss director Erksan’s prize-winning work. Erksan’s interview was recorded in 2008 before his untimely death. Akin’s interview is from 2013. Erksan shares memories of the difficulties in getting the movie made and his unusual way of creating movie stars.A River Called TitasMartin Scorsese Introduction (2:40, HD)Kumar Shahani Interview (15:34, HD): the filmmaker who claims director Ritwik Ghatak as his mentor explains the filmmaker’s approach to creating art in his only eight lifetime films. Shahani offers a laudatory critical explanation for the director's methods and motifs in A River Called Titas.TrancesMartin Scorsese Introduction (2:00, HD)On Trances (18:04, HD): as the first film restored by Scorsese’s World Cinema Project, the making and reception of Trances is discussed by Martin Scorsese, director Ahmed el Maanouni, and producer Izza Genini who, quite frankly, offer more insight into the personalities of the four musicians than the film itself does. Musician Omar Sayed also looks back on the movie and offers his views on its production.The HousemaidMartin Scorsese Introduction (2:17, HD)Bong Joon-ho Interview (15:04, HD): the filmmaker discusses the qualities of the film which set it apart from anything that was being made in Korea then or now.Sixty-Four Page Booklet: contains the cast and crew lists for all six films, a nice selection of movie stills, an overview essay on the collection by Kent Jones, and individual essays on each of the six films by Richard Porton, Charles Ramirez, Adrian Martin, Bilge Ebiri, Sally Shafto, and Kyung Hyun Kim.DVD Copies: each film has its own individual disc.Timeline: can be pulled up from the menu or by pushing the red button on the remote. It shows you your progress on the disc and the title of the chapter you’re now in. Additionally, two other buttons on the remote can place or remove bookmarks if you decide to stop viewing before reaching the end of the film or want to mark specific places for later reference.

Martin Scorsese’s World Cinema Project presents six films from around the world which would under ordinary circumstances not have been seen on American movie screens. Individually and as a group, they’re not for all tastes, and reactions to them will undoubtedly vary widely. But his organization in its seeking out the world’s cinema treasures and making sure they’re not lost to the ravages of time is a worthwhile one making these six examples of the work they’ve done more than worthy of attention.

Thanks for the thorough review on this one. A title I was curious about since it seems like a noble cause of a release but your review confirms that it's probably, ultimately, not my cup of tea. I'm more in love with the idea of the project than the actual result. I'll be passing on these.
You must log in or register to reply here.