Yasujiro Ozu’s last film An Autumn Afternoon is a lovely meditation on the dynamics of parents and children, a quiet but nonetheless powerfully emotional piece that should resonate even with viewers who have no children of their own. True to his cinematic style, the movie is artistically very still while possessing depths of feeling that evolve with repeated viewings. What a magnificent way to end one’s career! 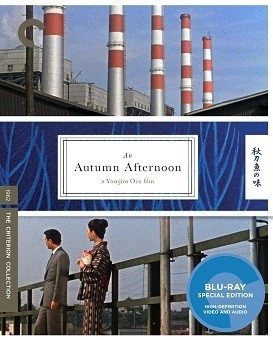 Shuhei Sirayama (Chishu Ryu) is a widower with three children, two of whom still reside with him though both are of an age where their peers have married and have even begun to sire children. Shuhei is quite comfortable having his twenty-four year old daughter Michiko (Shima Iwashita) take on the duties of running his household. However, an eye-opening experience with an old teacher fondly nicknamed “The Gourd” (Eijiro Tono), whose own daughter (Kuniko Miyake) has remained at home as his housekeeper until she’s left a bitter, pathetic middle-aged woman with no prospects, starts Shuhei thinking that perhaps he’s being selfish and should possibly push his daughter toward finding a husband or at least considering her situation more seriously.

The script by Kogo Noda and director Ozu hits all of the right notes of various parent-children currents and undercurrents, astutely resonating with us all in spite of the Japanese traditions. We see both happy and troubled marriages, squabbles over finances and selfish whims being satisfied, a daily pattern of work, socializing at bars and restaurants, and home life that’s banally repetitive: an easy way for years to pass within the blink of an eye leaving one wondering where time has flown. Ozu makes a point of keeping the women in the story non-subservient; they stand up to husbands and fathers when they make unwise decisions (always with that Japanese decorum that’s a great wonder to behold) and display behavior that always earns our respect and often captures our hearts, especially when their grief or disappointments are internalized until they can express them privately in an outward way. We also see early-on the parallel situations of the two father/daughter scenarios, one tragic and the other pointing in that direction, second-guessing where Ozu might go with them. The formalized Ozu style is, of course, thrust front and center of every shot with a stubbornly immobile camera set at a low level as if to subtly spy on the every motion of the characters we’re examining (or occasionally out of sight of the camera where our imaginations then go to work). The combination of such unmistakable formalism in the forefront while characters struggle with complexly mixed emotions in the back of the frame gives Ozu’s works an utterly unique power, unmatched and always memorable.

Performances are first-rate across the board with special bows of admiration for Chishu Ryu as the conflicted father, Shima Iwashita as his delicate daughter (the shot of her in her wedding ensemble is one of the most breathtaking revelations found in the cinema of its day), Keiji Sada as the spoiled son whose finances can’t match his desires, and Eijiro Tono as the former teacher now reduced to being a noodle shop owner who drowns his disappointments in alcohol while being oblivious to his own daughter’s miserable existence.

Ozu never worked in widescreen, so the 1.37:1 aspect ratio displayed here is the original theatrical frame. Problems on the Criterion DVD release with light strobing and some minor aliasing have been completely eliminated in this high definition transfer in 1080p using the AVC codec. The natural film grain is present along with outstanding sharpness featuring lots of detail in facial features. There is a slight green tinge in the timing which occasionally makes the color look a bit dated in some early shots but otherwise renders colors nicely with surprisingly saturated flesh tones. The image is clean, and contrast has been consistently maintained. The white English subtitles are easy to read. The film has been divided into 20 chapters.

The PCM 1.0 (1.1 Mbps) sound mix is typical of its age. Dialogue is clean and precisely rendered, and the sound effects and lightly ingratiating music coordinated by Takanobu Saito share the track quite engagingly. There is some flutter to be heard on the soundtrack (perhaps the sound of the film running through the camera during shooting?)

Audio Commentary: Ozu scholar David Bordwell offers a terrific analysis of Ozu’s style in general and its use in this film in particular. By using comparisons to many previous Ozu films while discussing this one, Bordwell will undoubtedly pique the viewer’s curiosity to explore some other Ozu properties which Criterion has issued.

Yasujiro Ozu and The Taste of Sake (14:40, HD): excerpt from a 1978 French television program on Ozu features critics Michel Ciment and Georges Perec extolling Ozu’s magnificent career which was then only being discovered in France. Subtitles in English are provided.

Enclosed Pamphlet: contains cast and crew lists and a few stills from the film along with a celebration of An Autumn Afternoon by writer Geoff Andrew and a discussion of Ozu’s diaries by Japanese film scholar Donald Richie.

An Autumn Afternoon may appear simple on the surface, but its emotions are as raw and profound as those found in the most florid melodrama. Ozu’s spare style and his uncanny knack of capturing joys and frustrations so fluidly makes this upgrading of the movie from DVD to Blu-ray an easy recommend.

Thank you for the review Matt. I'm going to pick this up.
You must log in or register to reply here.