Where in the world is Agent Fox Mulder? For the first half of season eight of The X Files, that’s the primary question on everyone’s mind. His discovery and the resultant exploits as he returns to the FBI along with new characters introduced who will take over for departing or less available cast regulars form the primary focus of season eight leading into what would ultimately be the show’s final season, its ninth. 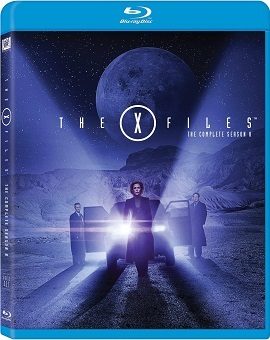 With Fox Mulder (David Duchovny) willingly submitting to alien abduction at the end of the seventh season as witnessed by his boss Assistant Director Walter Skinner (Mitch Pileggi), the hole at the center of the show was filled by the dogged Agent John Doggett (Robert Patrick), as skeptical as Dana Scully (Gillian Anderson) was at the beginning of her assignment to the X Files division. He’s been assigned by the acerbic Deputy Director Alvin Kersh (James Pickens, Jr.), himself an unbeliever in the paranormal, to assist Scully in finding Mulder while occasionally investigating any cases that come their way with the ultimate aim of once and for all shutting down the X Files division. But because Skinner is now a full believer and Doggett begins to come around once he begins witnessing his own unusual phenomena, the X Files operation seems more active than ever before, much to Kersh’s dissatisfaction.

Season eight is quite an odd season for the series. With David Duchovny making token appearances in only a few early season episodes (he’s dropped from billing in the main titles in many episodes though his image is now present as falling into an abyss) and rejoining the show full time around the halfway point, there’s an oddball vibe going on as both male stars seem to be vying for Scully’s attention and loyalty, and with Scully being pregnant with heaven knows what until she gives birth in the season finale episode, she isn’t around full-time this season either with her slack being taken up by an agent Doggett once worked with successfully, Monica Reyes (Annabeth Gish). With much of the alien conspiracy already revealed, the writers invented a new alien threat this season: alien facsimiles taking over for their human counterparts, only the aliens are for the most part completely invulnerable to harm: a race of super-beings who are beginning to propagate the planet (it seems as if they’re well on their way since, ludicrously, it seems no one apart from the core cast of regulars turns out not to be an alien). Apart from the preponderance of alien episodes, the other paranormal occurrences investigated by our agents involve a man-bat, a spine parasite, an avenging ghost, a man living a disturbing experience in reverse (by far the season’s most effective episode “Redrum”), a dream slayer, an X-ray vision killer, a metallic man, a fakir, a soul eater, a calcium-based sea creature, the return of the black oil, and a salamander man.

Robert Patrick’s no nonsense John Doggett may have been a completely different type of leading man from David Duchovny, but he certainly brings a new energy and verve into the investigations (though, like Scully in the seasons before him, it takes too long for him to shed the skepticism) and pairs interestingly with both Gillian Anderson’s Scully and Annabeth Gish’s Reyes. Gish offers her own quirky character to the mix and is another welcome addition to the show going into its final season. As for Duchovny and Anderson, their teamwork is as smooth as ever, and Anderson makes the most of her dramatic arc worrying about the efforts to either kill her before giving birth or abduct her baby afterwards. Mitch Pileggi has his most active season yet as Skinner and becomes a real asset to the show throughout the season. Also outstanding are Nicholas Lea as the always fascinating enigma Alex Krycek, and Mulder’s loyal Lone Gunmen Tom Braidwood, Bruce Harwood, and Dean Haglund. Among the guest stars standing out this season are Brian Thompson, Lawrence Pressman, Joe Morton, Bellamy Young, Danny Trejo, Keith Szarabajka, Grant Henslov, Arye Gross, Michael McGrady, Ken Jenkins, Penny Johnson Jerald, Adam Baldwin, Roy Thinnes, Eddie Kaye Thomas, Jay Underwood, M. C. Gainey, Miguel Sandoval, Zack Grenier, Frances Fisher, and Denise Crosby.

Here are the twenty-one episodes contained on six discs in this season eight Blu-ray set. The names in parentheses are the participants in that show’s audio commentary:

The episodes are presented in the widescreen television aspect ratio of 1.78:1 and are presented in 1080p resolution using the AVC codec. Color timing throughout this season seems way off with almost every episode too dark with blacks crushing details in shadows and colors hotter than usual resulting in unnatural skin tones. It’s a pity because the images are very sharp, and the producers brought in some new directors this season who brought fresh and unusual touches to their episodes, but often it’s difficult to make out what’s happening in scenes so heavy with shadows. Disc five in my review set also had episodes #16 and #18 affected by digital anomalies where the images broke apart and were unviewable until advancing to the next chapter. The episodes have been divided into either 14 or 15 chapters.

The audio tracks for the series are presented in DTS-HD Master Audio 5.1, and the program’s sound mixers really delivered feature film-quality soundtracks this year with outstanding atmospheric effects placed in the available surround channels, and directionalized dialogue at very effective moments. The show’s memorable music by Mark Snow gets a nice spread through the fronts and rears, too.

Audio Commentaries: the five commentaries this season all stay closely aligned to the episodes under consideration without giving too much away about events later in the season (though one does reveal the ultimate fate of Alex Krycek). The liveliest discussion is with the season premiere episode where Robert Patrick is enthusiastic about his addition to the show and praises everyone involved in such a professional production. Also interesting is Frank Spotnitz’s discussion about his directing debut “Alone” which allows him to talk about specific decisions he made to enhance the words and actions in his own script.

Special Effects Sequences by Mat Beck (14:34, SD): producer Paul Rabwin comments on special effects needs and shows the execution for episodes on five of the six discs in the set.

Deleted Scenes (10:19, SD): seven scenes spread across five of the six discs in the set with optional commentary by producers Frank Spotnitz and John Shiban.

International Clips (SD): on five of the six discs, brief excerpts from certain episodes are offered in a variety of languages. Here are the episodes with their running times and languages:

Threads of Mythology: Colonization (27:15, SD): tracing the alien mythology concocted for the show all the way back to the pilot (and including events in the first feature film), producers Frank Spotnitz and John Shiban, director Rob Bowman, and second unit director Brett Dowler do a fine job summarizing all the viewer should know about the alien invasion up to this point in the series.

TV Spot Ads (11:12, SD): forty-two promotional spots for season eight episodes as they aired for the first time on Fox.

While the video quality of season eight leaves much to be desired with color timing which results in too heavy an emphasis on crushing blackness and thick shadows, The X Files did manage to introduce a couple of engaging new (though not revelatory like Mulder and Scully) characters to carry the show into its ninth and final season and offered stories this season much more grim and threatening than in seasons past.

Our friends at The Digital Bits have provided this information for exchanges for season eight sets:

Fox is currently working to fix an issue with the black levels on The X-Files: Complete Season 8 episode (affecting all episodes in the set). They’re replicating replacement discs now, with an expected ship date of March 2016. If you’ve purchased the set, contact Fox Customer Care by this e-mail address to arrange a replacement: [email protected]. This exchange program should work in all countries/regions globally.

So will this review be updated when the fixed discs without the black crush make it out there (assuming they actually fix it)?

Lord Dalek said:
So will this review be updated when the fixed discs without the black crush make it out there (assuming they actually fix it)?
Click to expand...

First couple of folks at Bluray.com have received their replacements yesterday/today (requested around Christmas I think) and have said they fixed something so that the black levels appear consistent with the other seasons now. Still no exact indication of the flaw and why it only seemed to affect certain equipment -- same discs in different player showed very different results.

Lord Dalek said:
So will this review be updated when the fixed discs without the black crush make it out there (assuming they actually fix it)?
Click to expand...

Certainly if they send replacement discs, but that's out of my hands.

David Norman said:
First couple of folks at Bluray.com have received their replacements yesterday/today (requested around Christmas I think) and have said they fixed something so that the black levels appear consistent with the other seasons now. Still no exact indication of the flaw and why it only seemed to affect certain equipment -- same discs in different player showed very different results.
Click to expand...

Don't understand that either. Even on my lappy its noticeably darker than the Hulu streaming versions (same masters).

Thanks for posting this review and the details re: the black levels and replacement disc program being offered by Fox.
I am slowly working thru the 9 seasons - only on final disc of season 3 now, so would not have been aware of the quality issue on season 8 until I began viewing.
I e-mailed Fox this weekend and received a reply the same day telling me the replacements would be sent to me sometime in March - this is well before I will get to season 8, so I am happy with the response and timing.

My life was very busy during the original run of the X-files so I only saw the program occasionally. While some of the episodes fall flat for me, most are great - I am really enjoying catching up on a show I admired, but rarely got to see.

Received this e-mail yesterday, so am quite happy with the quick turnaround on my request for replacement discs (xxx'd out tracking info):

We are happy to inform you that your item has been shipped. Please find your tracking number below and please allow 24 hours for tracking updates to be processed.