The confidence seems to be bursting at the seams as the cast and crew complete the third season of The X Files. Now a critical darling as well as continuing to gain in popularity with viewers, the show had its most bountiful year at the Emmys as well nominated for eight awards and carrying home five of them including trophies for writing and cinematography (it still lost the Best Drama Series prize, this year to ER). Truth be told, however, even as the mythology of the human/alien conspiracy grows deeper each time one of those episodes turns up in the mix, other episodes this season perhaps push the envelope too much in terms of quirky, over-the-top, too-knowing oddness. 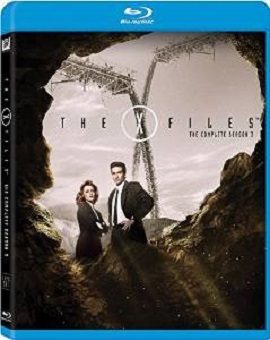 Though presumed dead by his superiors after being targeted by a hit squad organized by the Cigarette Smoking Man (William B. Davis), FBI agent Fox Mulder (David Duchovny) is found buried in a rock quarry and is nursed back to health by ancient New Mexican Indian tribe rituals. Once reunited, agents Mulder and Dana Scully (Gillian Anderson) continue investigating paranormal activities of many different types. Occasionally, cases regarding extraterrestrials do find their way into their lives with Scully, even more skeptical this season than last after she’s fed an explanation for her disappearance that disproves in her mind any semblance of possibility for aliens having been on Earth. Mulder often finds himself at odds with not only his partner but also with his boss Assistant Director Walter Skinner (Mitch Pileggi), his secret contact within the agency Mr. X (Steven Williams), and the Cigarette Smoking Man who is seen throughout the season meeting with a cabal of older gentlemen who seem to be very knowledgeable about the alien conspiracy Mulder is constantly investigating. One member of that executive group, labeled as the Well-Manicured Man (John Neville), seems less certain than the others about what they’re doing and occasionally feeds information to Mulder or Scully to seemingly allay his own conscience. By season’s end, however, alien presences again make themselves known in situations that even Agent Scully is going to have a very hard time explaining away.

The human/alien hybrid mythology takes a rather giant leap forward in season three in the season finale episode “Talitha Cumi,” but several other episodes during the season leave no doubt (except in Scully’s mind) about the alien existence and the powers some of them possess. Viewers are also made privy to Mulder’s father’s part in the original program and cover-up which has major repercussions in that season finale episode as well as showing us some enigmatic behavior by his mother. Elsewhere, the program continued with a range of paranormal encounters during season three involving, among others, an electric boy, a fat-sucking vampire, astral projections, a stigmatic, empathetic transference, lethal cockroaches, teenaged witches, a radiation beast, psychokinesis, a Sacona Indian shaman, a succubus, and a lake monster. The season boasts several two-part episodes, and there are more than a few change of pace episodes which play more for laughs than for scares offering sometimes over-the-top silliness masquerading as comedy-drama.

Gillian Anderson was nominated for an Emmy this year for her performance as Dana Scully, but her character took a decided step backwards during most of the season ridiculously denying anything extraterrestrial as a possibility (despite the removal of a small chip from her neck and a cadre of women meeting with her who were similarly abducted and sporting the same implants). David Duchovny contributed several story ideas for this year’s episodes in addition to starring as Agent Fox Mulder. The character is pretty much put through the ringer this year in terms of physical abuse, but his search for the truth about his sister’s long ago abduction and the current presence on Earth of aliens and the curious human/alien hybrids that seem to have a long, sordid history that’s being covered up is in no way abated from previous seasons. Mitch Pileggi is given more to do this season and is even in the hot seat as a murder suspect in one season three story. Also busier than in previous seasons is the strange smoking stranger played by William B. Davis. Unquestionably sinister and obviously running at least part of the show in attempting to keep X Files investigations from his doorstep, this character now seems to have had a history with many of the characters seen in the series from the beginning. We get to see more of Mulder’s delightful nerd posse: Melvin Frohike (Tom Braidwood), John Byers (Bruce Harwood), and Hugo Langly (Dean Haglund). Guest starring this season in memorable roles are Peter Boyle (the show’s first Emmy acting winner for his guest performance), Peter Donat (recurring as Mulder’s father), Jerry Hardin (recurring as the dead Deep Throat), Jack Black, Giovanni Ribisi, J. T. Walsh, Willie Garson, Nicholas Lea (recurring as the evil Alex Krycek), Stephen McHattie, Sam Bottoms, R. Lee Ermey, Kurtwood Smith, B.D. Wong, Lucy Liu, Charles Nelson Reilly, Jesse Ventura, William Lucking, Brian Thompson (recurring as the alien bounty hunter), and Roy Thinnes.

Here are the twenty-four episodes contained on six Blu-ray discs in the season three set. The names in parentheses refer to the commentators for that show’s audio commentary:

As with the other Blu-ray seasons of The X Files, the original 4:3 framing has been reformatted to 1.78:1 and is presented in 1080p resolution using the AVC codec. Purists may complain, but the results don’t appear to have been compromised when one compares these transfers to clips in the bonus features which have the original framing. These episodes resemble the quality of season one over that of season two, and most of the time look to be feature film quality. There are far fewer problems with upconverted videotape establishing shots, and most of the softness comes from glamor photography. This is a considerably darker season than the previous two, so black levels are especially important, and black levels are quite excellently captured in these transfers with only occasional black crush. Skin tones always seem natural and appealing throughout. The shows have been divided into 15 chapters.

The new audio tracks for the series are presented in DTS-HD Master Audio 5.1, and the repurposed sound has been superbly executed to wring the most out of the sound elements which are present (two of the season’s Emmys were for its achievements with its sound mixing and editing). There is good separation of effects to fill the surround channels, and there is even occasional directionalized dialogue though most of it is relegated to the center channel. The show’s eerie, driving music by Mark Snow gets a nice spread through the fronts and rears.

Audio Commentaries: two of the three commentaries offer valuable background information about the making of the episode. Only director R. W. Goodwin’s track seems a bit dull and by the numbers. In addition, he once again offers spoilers for future seasons, so one might not want to listen if he isn’t familiar with surprises to come.

Deleted Scenes (14:47, SD): six scenes are offered spread over four different discs and all but one offering optional commentary from Chris Carter.

Chris Carter Talks About Season 2 (19:07, SD): spread across five of the six discs, creator Chris Carter recalls specific memories about some of the outstanding episodes.

FX: Behind the Truth (17:33, SD): seventeen one-minute promo spots featuring various members of the cast and crew which aired on FX when the network began showing the program.

An honored season for The X Files, season three began to explore in even greater depth (for better and for worse) the many directions both serious and comic that the show could go in telling its stories. The Blu-ray release offers near-reference quality video and audio which fans of the show should be delighted to have. Recommended!

Your reviews often influence my purchasing decisions, and I appreciate your time and skill at what you do.
You must log in or register to reply here.