The producers of The X Files made a bold move in season six to bring the long-building alien conspiracy scenario to an end. Lots of questions were answered, and the revelations allowed the creative team to reboot other alien stories in entirely new directions. The series moved production to Los Angeles for the remainder of its run during this season as well giving a different look and feel to some of the episodes. It reflected somewhat in fewer viewers for each successive season of the show though this season did contain some of the program’s strongest and most emotionally moving episodes. 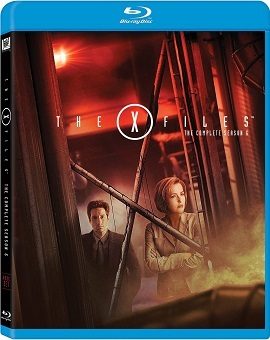 In addition to bringing the show’s central mystery to a strong conclusion (where we finally understood particulars about the original alien invasion, the alien-human hybrids being produced, the purpose of the Syndicate, the identities of the faceless aliens, and the Cigarette Smoking Man’s (William B. Davis) involvement along with his son Jeffrey (Chris Owens) in all of this culminating in the two part wrap-up “Two Fathers”/”One Son” at midseason), the writers were then free to concoct other alien scenarios apart from what had been driving the show for five and a half seasons. In fact, the last two episodes of the season “Field Trip” and “Biogenesis” each contained alien-based plots quite apart from the earlier stories and which seemed to suggest new directions for Mulder (David Duchovny) and Scully’s (Gillian Anderson) future endeavors. During the course of the season, Mulder, Scully, and Assistant FBI Director Skinner (Mitch Pileggi) come right up to death’s doorstep and even walk through on a couple of occasions only to be pulled back by one trick or another. Some other recurring characters aren’t so lucky.

The season was also host to more than the usual number of more light-hearted capers with the team including a two part body/personality switch scenario (“Dreamland” I and II) which wore out its welcome even before it ran out of plot and a Christmas episode set in a haunted house which allowed great guest star turns by Edward Asner and Lily Tomlin but also was weakly concluded. On the other hand, star David Duchovny wrote and directed the season’s best and most moving episode “The Unnatural” with great performances by guest stars Jesse L. Martin, Fredric Lane, and M. Emmet Walsh. Also featured during the season were unusual stories featuring demon fetal harvests, a weather manufacturer, poison blood, a tentacle creature, a photographer tied to the Grim Reaper, a Groundhog Day variation as the team gets continually blown up during a bank heist, a wolfdog called a Talpa, an author whose fiction becomes real-life murder, and the alien in “Field Trip” who has a most interesting way of capturing and holding its prey.

The events in The X Files: Fight the Future feature film should have been enough evidence to forever silence the skepticism of Agent Dana Scully, but, no, season six finds her as doubtful as ever about the existence of aliens and other oddities found in the X Files, so Gillian Anderson’s performance becomes enormously tiresome during the first two-thirds of the season. Near the tail end of the year, she does begin to have her eyes opened, but future seasons will see how convenient her memory becomes. David Duchovny seems less active this season, taking minimal part in several episodes and walking through some of the others (he failed to receive an Emmy nomination this year after earning one the two previous years). We get to see more frequent appearances of Mulder’s nerd posse, the Lone Gunmen: Melvin Frohike (Tom Braidwood), John Byers (Bruce Harwood), and Hugo Langly (Dean Haglund). In addition to other recurring actors from previous years like William B. Davis, Chris Owens, Brian Thompson, and Nicholas Lea (still the series’ most enigmatic presence as Alex Krycek, sometimes a help and sometimes a hindrance to our heroes), the major guest star list swelled this season due to production being based in Los Angeles. Among them (apart from those already named) were Mimi Rogers, James Pickens, Jr., Wendi Malick, Bryan Cranston, Michael McKean, Nora Dunn, Bruce Campbell, Victoria Jackson, Dirk Blocker, Geoffrey Lewis, Richard Ruccolo, Veronica Cartwright (earning yet another Emmy nomination for her guest role as Cassandra Spender), Silas Weir Mitchell, Darren McGavin, Carrie Hamilton, Peter White, Andrew Robinson, Catherine Dent, Jesse James, Charles Rocket, John Billingsley, and Jim Beaver.

Here are the twenty-two episodes contained on six discs in the season six Blu-ray set. The names in parentheses refer to that episode’s speaker on the audio commentary available for that episode:

The episodes are presented in the widescreen television aspect ratio of 1.78:1 and are presented in 1080p resolution using the AVC codec. Apart from a few soft shots here and there (likely due to faulty focus pulling), images are crisp and quite detailed, and color is balanced and quite believable with very realistic skin tones. Black levels are very impressive, and contrast has been handled consistently and well. The episodes are divided into 15 chapters.

The audio tracks for the series are presented in DTS-HD Master Audio 5.1, and the lossless sound here has been superbly executed to wring the most out of the sound elements which are present. There is good separation of effects to fill the surround channels while dialogue has been placed firmly in the center channel. The show’s memorable Emmy-nominated music by Mark Snow gets a nice spread through the fronts and rears.

Audio Commentaries: all of the commentaries are by series veterans who explain their motivations for the techniques they utilized in crafting the episode. Yes, spoilers for future seasons still manage to creep into some of the commentaries, so let first-timers beware. Otherwise, they’re all interesting views on how this unusual show was put together.

Special Effects Commentary (15:56, SD): producer Paul Rabwin comments on special effects needs and execution for episodes on four of the six discs in the set, what he calls “attention to details.”

Deleted Scenes (28:20, SD): thirteen scenes excised from episodes on four of the six discs in the set are presented with optional commentary from producer/writer Frank Spotnitz.

International Clips (SD): on five of the six discs, brief excerpts from certain episodes are offered in a variety of languages. Here are the episodes with their running times and languages:

Promotional Featurette (2:01, SD): a brief vignette produced to promote the premiere of the show’s sixth season.

TV Spot Ads (11:46, SD): forty-four promotional spots for season six episodes as they aired for the first time on Fox.

While season six was a perfectly entertaining and enlightening season for The X Files featuring some of the show’s most memorable episodes, it’s clear the program had now peaked and was on its downward slope toward its conclusion. Earning only one Emmy (out of seven nominations) this season for the incredible make-up effects delivered week-after-week, The X-Files Blu-ray set continues to impress in its quality delivery of the show’s visual and sound achievements.

The events in The X Files: Fight the Future feature film should have been enough evidence to forever silence the skepticism of Agent Dana Scully, but, no, season six finds her as doubtful as ever about the existence of aliens and other oddities found in the X Files, so Gillian Anderson’s performance becomes enormously tiresome during the first two-thirds of the season.
Click to expand...

And that's what led to me abandoning the show during this season when it originally aired. Not just Scully's impossibly bad memory for such things, but the way the writers and producers opened up so much possibility during the movie, and then went back to their "monster of the week" stories which would completely ignore the mythology, even though the mythology had crowd too big and too sinister for any sane person to not at least mention regularly. I think I've said this before, but later shows clearly influenced by X-Files, like "Fringe", did a much better job of balancing the mythology by at least alluding to it in episodes that weren't focused on it.


To me, X-Files is a very good show that just misses the mark for being one of the all-time greats. Had they been less schizophrenic and allowed the mythology to spill out throughout the show, instead of in improbably small self-contained little boxes along the way, it would have been a much better show, and a much more fun viewing experience.


Since I stopped watching the show regularly during this season, and have only purchased the Mythology collections prior to getting the Blu-rays, any "monsters of the week" from about halfway through this season to the end will be brand new to me. I hope I'm able to put my biases aside and enjoy them for what they are, rather than for what I had wished they could have been.


Thanks for another great review!