With the producers of The X Files thinking season seven might be the last one, there was obviously a conscious effort made to tie up some loose ends from previous storylines and also have a rollicking good final season (the show would actually run two more years). So, both aims were somewhat achieved through there seemed to be a preponderance of lighter episodes this year, and some of the heavier ones had scripts which weren’t well thought through. Three more Emmys were awarded at season’s end (for sound mixing, make-up, and special effects), but the glory years of the show where the actors and the program were up for major awards were in the past. 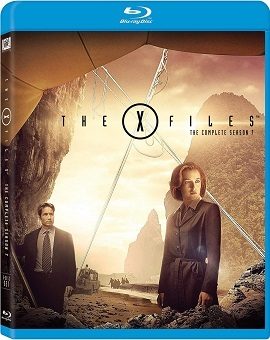 The first two episodes of season seven resolved the season six cliffhanger dilemma of Mulder’s (David Duchovny) sanitarium stay and Scully’s (Gillian Anderson) involvement with an alien craft discovered on the coast of Africa. To say that the story wasn’t notably well handled is an understatement though the plot did give Director Skinner (Mitch Pileggi) more to do than in seasons past and inevitably brought him around to being more of a help than a hindrance to our two heroes. Much of the spaceship discovery with its distinctive markings (containing translated excerpts from major religious writings) was promptly ignored for the remainder of the season. Midway through the season also found in the episode “Closure” the wrap-up of the other major conspiracy thread which had driven the series from the beginning – the abduction and whereabouts of Mulder’s sister Samantha. With those two threads completed, the alien conspiracy stories seemed to have been placed on the backburner until the season finale episode which gave the show a way to write out the departing David Duchovny with a story that seemed to bring the series full circle.

During the season, both Gillian Anderson and David Duchovny wrote and directed episodes. Anderson’s show “All Things” was more love story than X Files fodder while Duchovny’s effort “Hollywood A. D.” was more light-hearted with a Hollywood feature film version of Mulder and Scully’s partnership being produced with Garry Shandling playing Mulder and Tea Leoni (David Duchovny’s real-life wife) playing Scully. Among the other oddball cases the duo investigate this season are tales featuring a brain eater, a necromancer, a super speedster, a man afflicted with good luck, a criminal magician (which features the season’s best twist), a devil preacher, a monster who feeds on fear, a virtual ninja warrior, a black magic family annihilator, a literal case of split personality, a flesh eating tobacco beetle, bodily bilocators, and a genie.

Here are the twenty-two episodes contained on six Blu-ray discs in the season seven set. The names in parentheses are the participants in that show’s audio commentary:

The episodes are presented in the widescreen television aspect ratio of 1.78:1 and are offered in 1080p resolution using the AVC codec. Images are crisp and quite detailed for the most part though sharpness lags when glamor photography is utilized (more so this season than in previous years), and color is balanced and quite believable with very realistic skin tones. Black levels are very impressive, and contrast has been handled consistently and quite well. The episodes are divided into 15 chapters.

The audio tracks for the series are presented in DTS-HD Master Audio 5.1, and the Emmy-winning sound mixers really delivered feature film-quality soundtracks this year with outstanding atmospheric effects placed in the available surround channels, and directionalized dialogue at very effective moments. The show’s memorable Emmy-nominated music by Mark Snow gets a nice spread through the fronts and rears.

Audio Commentaries: the four commentaries this season feature almost no spoilers, and each discussion really concentrates on the individual director’s technical efforts to achieve his or her vision for the episode on the screen.

Deleted Scenes (17:23, SD): ten scenes are spread across five of the six discs in the set with optional commentary by creator Chris Carter.

Special Effects Commentary (20:16, SD): producer Paul Rabwin comments on special effects needs and execution for episodes on all six discs in the set.

Profile: A. D. Skinner (6:15, SD): producer Frank Spotnitz and actor Mitch Pileggi discuss the evolution of the character from his first appearance stressing especially his importance in the dual season premiere episodes.

TV Spot Ads (12:15, SD): forty-two promotional spots for season seven episodes as they aired for the first time on Fox.

While the emphasis on jokey, light-hearted episodes seemed to be a bit heavy-handed during season seven of The X Files, there were also enough emotional and frightening episodes to give the series a passing mark, but the decline had clearly set in. The Blu-ray set, however, offers outstanding picture and sound quality which fans of the show will undoubtedly appreciate.

A massive undertaking to review the entire boxset. A season every 4-5 days is pretty heavy lifting with the amount of extras.


Now the most important season 8 review is coming up since so many folks have reported video issues -- possible wrong gamma or RGB settings or flags, super dark/incorrect Black levels on some equipment but not others. I'm really interested to hear what you're seeing on the upcoming sets


I'll be especially interested if you have the issues if it's correctable or if you've heard anything from the Fox Camp on their information.

Lord Dalek said:
Since its an unavoidable uprez, how does "X-Cops" look?
Click to expand...

No video problems of any consequence that I noticed in this X File version of Cops. Admittedly, though, I was burning through the episodes quickly so I'd have to go back and specifically look to see if I could find notable artifacts.
You must log in or register to reply here.