Growing in popularity, critical acclaim, and its own inner complexity throughout season two, The X Files became one of the most discussed network shows in the nation. And the Television Academy certainly took notice as well nominating the second season episodes for a total of seven Emmys including its first as Outstanding Drama Series (ABC’s NYPD Blue took home the prize). Neither of the stars made the Emmy list during season two though Gillian Anderson would appear the following year and David Duchovny had his time in season four, but their teamwork was as strong as ever and made tuning in to Fox on Friday nights something of a ritual. 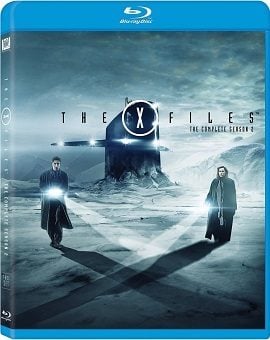 As with so many series that try to lure viewers back by altering the show at the end of a season, season one had left the series with the inevitable cliffhanger: the X Files unit shut down and Dana Scully (Gillian Anderson) and Fox Mulder (David Duchovny) given other assignments: she training recruits in forensics at Quantico and he reporting on wiretap investigations with a frustrating desk job. Though Mulder continued investigating unofficially anything strange that came his way, it wasn’t until the sixth episode of the season that assistant director Walter Skinner (Mitch Pileggi) reestablished the X Files division and reunited Mulder and Scully. Part of the separation was due to the real-life pregnancy of star Gillian Anderson, so it was written into early episodes that she had been abducted (naturally, it wasn’t quite clear whether it was an alien abduction or a governmentally sanctioned one; she herself had no memory of the events). After the murder of Deep Throat (Jerry Hardin), Mulder’s governmental informant, in the season one finale, Mulder went unaided in his investigations until the appearance in episode four of the mysterious Mr. X (Steven Williams). As unfriendly and barely helpful as Deep Throat had been useful, Mr. X made a most reluctant resource for Mulder as the season progressed.

The seeds of a governmental conspiracy with alien presences became even more strongly ingrained during season two with the added importance of the “Cigarette Smoking Man” (William B. Davis) who hovered around Skinner’s office often defying Skinner or Mulder in their efforts to pry information out of him. But as in season one, a great majority of the episodes had to do with paranormal occurrences across the United States which only occasionally seemed to involve aliens (though the season finale provided shocking revelations about Mulder’s father and his seeming participation in the government-alien operation). Among the strange events that Mulder and Scully must contend with during season two was one of the creepiest of the entire series: a Fluke Man who lives in the sewer system of New Jersey. Also eye-opening were episodes concerning a psychic manipulator, blood feeders, a silicon-based (rather than carbon-based) organism, a fetishistic shape-shifter, Satanists, a devil child spirit, a cannibal cult, voodoo worshippers, and a shadow with killing powers.

The byplay between Mulder and Scully became even more pronounced during the second season as David Duchovny and Gillian Anderson explored the depths of their characters more fully than ever. Duchovny especially was given an actor’s field day in the season finale when he learns he had been slowly drugged to make him paranoiac and mistrustful even of Scully as he travels home to contend with his father’s issues with his health and his conscience. Assisting Mulder during Scully’s separation early in the season was a new agent Alex Krycek played by Nicholas Lea. Though at first he seems helpful and accommodating, he has a secret of his own and inevitably becomes a nemesis for Mulder and Scully. The season offered another outstanding season for guest stars featuring the likes of Steve Railsback, CCH Pounder (an Emmy-nominated performance), Bradley Whitford, Paul Sand, Sab Shimono, Terry O’Quinn, Bruce Weitz, Dan Butler, Brian Thompson (a recurring role as a shapeshifting alien bounty hunter), Peter Donat, Jayne Atkinson, David Cubit, John Savage, Dean Norris, Michael Anderson, Charles Martin Smith, John Pyper-Ferguson, Tony Shalhoub, and Gary Grubbs.

Here are the twenty-five season two episodes contained on seven discs in the Blu-ray set. The names in parentheses refer to participant in the audio commentary for that episode:

As with the other Blu-ray seasons of The X Files, the original 4:3 framing has been reformatted to 1.78:1 and is presented in 1080p resolution using the AVC codec. Purists may complain, but the results don’t appear to have been compromised when one compares these transfers to clips in the bonus features which have the original framing. While sharpness is usually very good, this season features more frequent soft scenes than season one did, and establishing shots are often out of focus and, when taken from videotape sources, filled with jaggies and other low resolution artifacts. The special effects work done in standard definition doesn’t really betray its origins often, but those scene-setting clips often take one right out of the show for a moment. Color is otherwise very strong, and black levels, very important to the series, can be deep, but sometimes blacks get crushed and details in shadows compromised. The episodes have been divided into 15 chapters.

The new audio tracks for the series are presented in DTS-HD Master Audio 5.1, and the repurposed sound has been superbly executed to wring the most out of the sound elements which are present. There is good separation of effects to fill the surround channels, and there is even occasional directionalized dialogue though most of it is relegated to the center channel. The show’s eerie, driving, Emmy-nominated music by Mark Snow gets a nice spread through the fronts and rears.

Audio Commentaries: the three that are present are more interesting than those in season one. Chris Carter made his directorial debut with the “Duane Barry” episode and talks with pride about his work on it. Writer Frank Spotnitz also made his writing debut with this episode and speaks fondly of his experience. Director R. W. Goodwin’s track offers spoilers for future seasons, so one might not want to listen if he isn’t familiar with surprises to come.

Chris Carter Talks About Season 2 (27:05, SD): spread across the seven discs, creator Chris Carter recalls specific memories about some of the outstanding episodes.

International Clips (SD): on five of the seven discs, brief excerpts from certain episodes are offered in a variety of languages. Here are the episodes with their running times and languages:

Behind the Scenes Clips (2:13, SD): for three different episodes, three very brief behind-the-scenes looks as shots are being set up.

FX: Behind the Truth (9:20, SD): nine one-minute promo spots featuring various members of the cast and crew which aired on FX when the network began showing the program.

The murky connections and frustrating manipulations with our two main characters become darker and ever more complex in the second season of The X Files, but the Blu-ray presentation of the series is mostly stellar weighed down only by some cost-cutting measures in the original production which are now the program’s only liability. Recommended!