A reasonably satisfying screen adaptation of D. H. Lawrence’s semi-autobiographical coming-of-age novel, Jack Cardiff’s Sons and Lovers captures the feel of an era superbly and possesses a handful of sensational performances, but there’s a sometimes stiffness to the dialogue that renders it at best too knowing and at worst somewhat ridiculous. Directed by award-winning cinematographer Jack Cardiff with an authenticity that’s often striking and with wonderfully interesting cinematic compositions, Sons and Lovers is rather brilliant to look at even when the story trundles its way somewhat rudimentarily toward its inevitable conclusion. 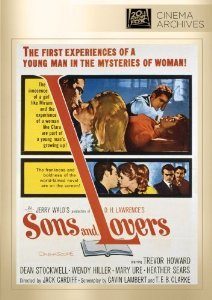 Artist Paul Morel (Dean Stockwell) has no intention of working in the mines where his father (Trevor Howard) and brother Arthur (Sean Barrett) have slaved for years and which eventually claim Arthur’s life. The wealthy art connoisseur Mr. Hadlock (Ernest Thesiger) sees one of Paul’s paintings and offers to become his patron sponsoring his entry into art school in London, but Paul is so fixated on his mother’s (Wendy Hiller) rocky home life with her drunken lout of a husband that he turns it down to clerk in a dress factory in the village of Nottingham. Though he’s found a soul mate in local village girl Miriam (Heather Sears), their one carnal experience was not to her liking, and Paul breaks things off. At the shop, he meets and begins a relationship with the married-but-separated Clara Dawes (Mary Ure), but despite their fulfilling sex life, she realizes she can never fully claim Paul as long as his mother is his first priority.The script by Gavin Lambert and T.E.B. Clarke does a good job circumventing the Production Code’s restrictions with on-screen discussions and representations of intercourse, but they’ve also succumbed to a writerly foible of giving uneducated or poorly schooled people the wisdom of the saints and a flowery way of expressing their lessons about life (the break-up speech between Clara and Paul is particularly arch). There’s a bit too much talk all around and sometimes not enough cinematic representation of emotions such as when Paul gives up his chance at art school thinking his mother needs him at home for solace against her husband’s verbal abuse when he suddenly realizes that this is a duet the two have been performing for decades as they make up routinely after each squabble (Dean Stockwell’s Paul hardly registers any mortification over his lost chance). Jack Cardiff certainly uses his widescreen canvas beautifully setting up very interesting shots with, for example, the young Paul and Miriam on the left side of the screen while a millhouse wheel revolves on the far right or Paul and Clara taking an idyllic run along a deserted beach and talking underneath a pier with flocks of seagulls squawking in the overhead right side of the frame. And he uses close-ups powerfully, too, with each of the central characters coming in for a fair share of the spotlight and making the most of their opportunities.Though billed second, Dean Stockwell is definitely the star of the film doing nicely as the sensitive, yearning Paul. His passivity is sometimes a bit maddening, but he’s likely performing the role as written and directed. Trevor Howard, on the other hand, commands the screen throughout, not just when he’s bellowing and throwing his testosterone around, but in other scenes like a hilarious Saturday night bath sequence where he shows no modesty even with his oldest son’s new wife in the next room. Wendy Hiller does a superb job, too, with her smothering mother who never seems to be overly concerned about the effect her situation has on her youngest child. As the two women in Paul’s life, Mary Ure as the married Clara and Heather Sears as the repressed Miriam are both splendid.

The film’s Cinemascope 2.35:1 theatrical aspect ratio is faithfully conveyed in this transfer which is anamorphically enhanced for widescreen televisions. Though the image is a shade too dark which occasionally crushes black levels and limits shadow detail, sharpness is very good throughout, and the grayscale at its best moments can be handsome and very satisfying. Though there are some specks here and there, the image quality is certainly good enough to help a first-time viewer understand how Freddie Francis earned the Academy Award for his evocative cinematography. The film has been divided into chapters every ten minutes so this film has 11 chapters.

The Dolby Digital 2.0 mono sound mix is decoded by Dolby Prologic into the center channel. Once again, Fox engineers have encoded the mix at excessive volume levels which will require a manual adjustment on the part of the viewer to prevent distortion. However, they’ve done a fine job attenuating hiss and other age-related artifacts. While the fidelity isn’t spectacular (very little on the low end), the mix allows the dialogue to come through very professionally (with ADR work, however, quite noticeable in places).

The Fox made-on-demand discs do not offer any bonus features, not even a trailer.

Sons and Lovers gets a surprisingly good Fox Cinema Archive release. Lawrence lovers probably won’t get quite the kick out of this as they will with Lawrence’s Women in Love which was filmed exquisitely by Ken Russell at the end of the same decade when the Production Code was no longer in effect, but the movie has its own power and comes with a firm recommendation.

Thanks for the review, Matt! I am glad to hear that this one is in the correct aspect ratio.

I think Cardiff is underrated as a director and it is nice to see more of his directorial efforts being released.

Thanks so much Matt, for the review! Excellent appraisal of both the film's defects and attributes. This was a film I loved for its visuals when I was in my early teens and was hoping for a Blu-Ray, I'm happy, though, to hear that at least the DVD is anamorphically enhanced, and fairly nice looking in terms of grey scales. I've completely given up on Fox Cinema Archive releases, but I will probably be picking this one up!
You must log in or register to reply here.
Share:
Facebook Twitter Reddit Pinterest Tumblr WhatsApp Email Link