King Henry VIII’s desperate attempts to produce a male heir resulting in the beginnings of the Protestant Reformation in England has been a tale told through countless generations on the stage, on radio, in films, and on television. The cast of characters remains the same in Wolf Hall, the latest mini-series in relating the story of King Henry and his second wife Anne Boleyn, but the focus is altogether different this time. Rather than Henry or Anne as the center of attention, the point of view this time is from the King’s secretary Thomas Cromwell, and the story told from a completely different viewpoint makes Wolf Hall one of the most interesting and exceptional historical productions seen in recent years. 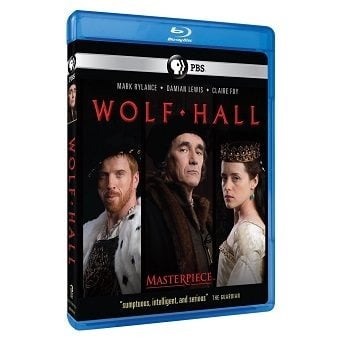 Rising through the ranks from a lowly start as the son of a blacksmith, Thomas Cromwell’s (Mark Rylance) experiences as a merchant banker and lawyer eventually bring him to the attention of King Henry VIII’s (Damian Lewis) once trusted friend and colleague Cardinal Wolsey (Jonathan Pryce). Wolsey is currently out of the King’s favor due to his allegiance to the King’s first wife Katherine (Joanne Whalley) who after twenty years cannot provide him with a male heir. Cromwell’s advice to the King concerning his growing interest in Anne Boleyn (Claire Foy) as a second wife allows the monarch to realize Cromwell’s talents as a man of even temperament, sound judgment, and more than a little deviousness. Before long he’s a member of the King’s Privy Council and his trusted right-hand man from whom he seeks emotional guidance and oftentimes direct assistance in matters of state where his particular talents of cool observation and thoughtful response can do the King’s dirty work. Anne, quite a political manipulator in her own right, recognizes Cromwell’s talents and potential power and effects a constant battle of wills with him secure that her eventual placement as Queen will prevent him from gaining the upper hand with her. But Anne’s security is actually tenuous unless she can produce a male heir herself, and after the birth of her first child Princess Elizabeth, she realizes her own position is not quite as secure as she thought.

Peter Straughan’s adaptation of the novels by Hilary Mantel presents all the familiar stories from this specific period in Tudor history: the downfall of Cardinal Wolsey, the problems with Sir Thomas More (Anton Lesser) and his refusal to sign an oath of allegiance to Henry’s being named Supreme Head of the Church of England, Anne Boleyn’s rise and fall after the birth of a daughter and two miscarriages. But because he’s writing these historical events through the eyes of the master manipulator Thomas Cromwell, these are very different variations of the stories we’ve seen before in A Man for All Seasons, Anne of the Thousand Days, the first two installments of The Six Wives of Henry VIII on television, or, most recently, The Other Boleyn Girl. The period décor and the lavish costuming is first rate throughout (as it was in those other adaptations), but as Thomas Cromwell turns out to be a very complex and fascinating man in his own right with some tragic family circumstances and a peculiarly enthralling way of standing sometimes in the shadows watching and remembering all he sees with an absolute poker faced reaction to it all and then later calling these events up from memory at just the proper time, it becomes a riveting character study of the first order. Director Peter Kosminsky turns out episodes that simply drip with royal intrigues and less than subtle maneuvering for favor from one or another of the royals, but the series never devolves into merely a Tudor period soap opera (as The Tudors did) but rather a highly charged political drama with historical significances which can still be felt today.

Award-winning actor Mark Rylance takes on the role of Cromwell with a marked degree of stoicism and restraint. Cromwell is often a passive participant in events as they unfold doing his work after the fact to bend and break words or events as they suit his purposes, so it’s altogether fitting that he’s not a fireworks pageant of emotion on the outside except on the rarest of occasions (Henry’s near-death experience in a joust rouses him from his torpor when it seems the country might well plunge into civil war again), but it’s sometimes possible to see the wheels turning (how he gets Thomas More’s goat is particularly fascinating) and the performance is a revelation of subdued play and passion. Damian Lewis gets the great privilege of playing Henry before he became a grotesque, puffed up shell of a man, but his bark and his bite can still sting, and it’s on display more than once by the Emmy-winning actor during the show’s six episodes. Claire Foy is truly a revelation as Anne Boleyn. Seen through Cromwell’s eyes, the woman’s shrewish temperament combined with a political agenda all her own and more than a bit of willfulness and spitefulness makes her something of a horror. We don’t see the tenderer side she obviously would have shown with Henry in private, so we oddly root for her downfall through the series. Celebrated actors like Bernard Hill as Anne’s uncle the Duke of Norfolk, Mark Gatiss as Cromwell’s calculating nemesis Stephen Gardiner, Jonathan Pryce as Wolsey, and Anton Lesser as Thomas More all offer smashing portrayals very different from the characters we’ve seen in other enactments of these stories.

Here are the six episodes contained on three Blu-ray discs in this set:

The widescreen television aspect ratio of 1.78:1 is presented in 1080p resolution (the liner notes claim 1080i but only the PBS and Viking Cruise promo ads are in 1080i) using the AVC codec. Apart from only middling black levels, these six programs offer a quite definite advancement in picture quality from their presentation on PBS’ Masterpiece. Color is wonderfully realized and strong without ever getting too hot with accurate and appealing skin tones. Sharpness is first rate as we can see telling details in the facial features of all of the principal characters. Contrast has been evenly applied for a beautiful image throughout. Each episode has been divided into 8 chapters.

The DTS-HD Master Audio 2.0 stereo sound mix offers the dialogue in beautifully recorded and accurate reproduction with the background music score being offered in a robust stereophonic rendering which never overpowers the plentiful speech.

The People and the Politics (10:05, HD): director Peter Kosminsky, producer Colin Callender, and actors Mark Rylance, Damian Lewis, Clair Foy, Mark Gatiss, Tom Holland, Jonathan Pryce, and Thomas Brodie-Sangster comment on their characters and the excellence of the production bringing them to life.

Bringing It to the Screen (6:27, HD): producers Colin Callender and Mark Pybus, director Peter Kosminsky, and writer Peter Straughan discuss how their production offers a revisionist, mind-expanding approach to the familiar historical tales feeling that the series revels in its complexity in presenting the politics without being watered down.

Cast/Crew Interviews (HD): brief sound bites from the show’s director and star cast which were used in “The People and the Politics” bonus feature described above.

For lovers of history, this tantalizing reexamination of Henry VIII’s frustrating attempts to produce a male heir by Anne Boleyn is given a fresh interpretation in Wolf Hall, a studied though undoubtedly riveting historical drama spread over six detailed episodes and offered in majestic quality on this 3-disc Blu-ray set. Highly recommended!

Excellent review Matt.
You must log in or register to reply here.