Watching television in the “old” days (say, the 1960s) used to be such an easy proposition. You had three choices, and that was it: no home video, no DVRs, no cable networks, no streaming. Today, in addition to hundreds of cable channels, other outlets like Netflix, Amazon, and DirectTV are producing their own product for distribution to their customers adding even more complexity to one’s choice-making decisions. The latter company last season produced Kingdom, a ten-episode dramatic series set in the world of MMA fighters that was successful enough to warrant a second season. Fox is releasing the first season of this imminently watchable series on DVD-MOD discs for those without access to DirectTV. 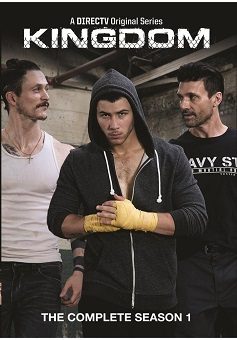 The series, the creation of writer Byron Balasco, revolves around the Kulina family. Dad Alvey (Frank Grillo) was a former MMA champion who now owns a gym that specializes in training potential MMA champions. Alvey’s two sons Jay (Jonathan Tucker) and Nate (Nick Jonas) are both MMA fighters with great potential, but Jay has had substance abuse and psychological issues which have made him a bad risk for promoters, and Nate after winning a key fight in the first episode is set upon by thugs who injure him severely enough to put his training on hold while he undergoes physical therapy. Alvey needs a real headliner for his gym to bring in more business, and he settles on newly-released-from-prison Ryan Wheeler (Matt Lauria) who had become a champion but whose vicious attack on his father had sent him to prison for five years. Now out, he’s not sure he’s got the killer instinct any more, but the everyday job of pest exterminator he’s given upon leaving prison convinces him his heart is still in the gym where his former fiancé Lisa Prince (Kiele Sanchez) is now not only running Alvey’s Navy St. Gym but is also Alvey’s girl friend.

The first season follows the ups and downs in the lives of each of the main characters. Though set in the world of brutal MMA brawling, there are only four fights during the course of the season: Nate’s initial fight in the first episode, Jay’s fight to establish his reliability and ring savagery, and climactic season ending fights for both Jay and Ryan to set up developments for season two. In between, the love triangle between Alvey, Lisa, and Ryan follows fairly predictable guideposts through the season. The real eye-openers are in the characters of Jay and Nate, each of whom display hidden facets to their personalities. Despite his wild ways, Jay actually shows the most responsibility of any of the show’s main characters: taking training and weight loss seriously, offering support to his injured brother and his best friend Ryan when they have doubts about their abilities, and, most importantly, locating his drug addicted mother Christina (Joanna Going), extricating her from her vicious Irish pimp’s grip, and drying her out under his own watchful eye. Nate has a deeply hidden secret which he goes to some lengths to disguise from his family, but it isn’t actually delved into in any depth during season one, its revelation coming in the last moments of the season finale episode.

While the dialogue at times may ring a bit hollow and the plotting is often rather anticipated, the acting across the boards is first-rate. Jonathan Tucker and Frank Grillo are the most galvanizing presences among the actors with their characters undoubtedly the most demonstrative and expressive, and both are also completely convincing as fighters. Matt Lauria and Nick Jonas likewise seem comfortable in the cage as well though their characterizations aren’t quite as captivating as Tucker’s and Grillo’s. Both of the principal actresses are outstanding. Kiele Sanchez as the lover holding things together financially out of love for Alvey but feeling underappreciated as the season progresses makes an interesting leading lady, and Joanna Going’s heroin addicted hooker is completely believable in the early episodes and heartbreaking as the season progresses following the expected course of missing her old life even though her new one could offer her so many safer if less stimulating highs.

Here are the ten episodes contained on three MOD discs in the season one set:

The programs are presented in their widescreen television aspect ratio of 1.78:1 and are anamorphically enhanced for widescreen televisions. Sharpness is very good for standard definition, and color is well balanced and always true with realistic skin tones. Contrast has been consistently applied to the imagery resulting in reliable but not excessively deep black levels. Being standard definition transfers, there is aliasing present, and some occasional moiré patterns can also be glimpsed. The episodes have been divided into 6 chapters.

The Dolby Digital 5.1 sound mix is robust for the show though the use of the surrounds is limited to music cues (hip-hop training music and occasional background score by Tyler Bates) and occasional crowd noise during the fight sequences. The dialogue has been excellently recorded and has been placed in the center channel. Other atmospheric effects get a nice spread across the fronts with occasional use of the surrounds.

The discs are as barebones as they come with only a menu screen on each disc.

Kingdom offers intriguing drama and really dynamic performances from most of its outstanding cast. While it’s a pity no background bonus material reveals the obvious blood, sweat, and tears that go into the making of this unusual series, the episodes get a more than decent presentation on these made-on-demand discs.