With Downton Abbey about to wrap up a six-season run in the United States on PBS, the network naturally is looking for another period drama to take its place, admittedly big shoes to fill since Downton has by any measure brought the largest audience to PBS of any series in the history of the network. Rather than plumbing the BBC for a hopeful replacement, however, the network has decided to produce one of its own, a six-part Civil War drama called Mercy Street. Featuring (as Downton does) a plethora of storylines and a host of multi-faceted characters representing both rich and poor, the helpful and the hurtful, and offering points of view from both sides of the conflict, Mercy Street shows promise. While obviously suffering from some first season rough patches and some characters painted in too broad strokes making them more cartoons than flesh and blood people, Mercy Street might well develop a following of its own. 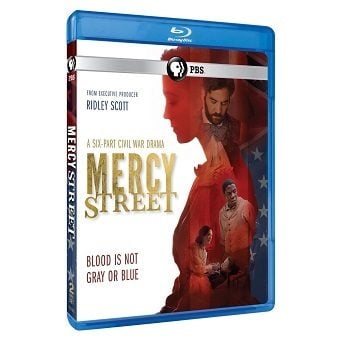 It’s 1862 as the action unfolds in now Union-occupied Alexandria, Virginia. The Green family, loyal Confederates, is having to cope with their home and their family-owned hotel being taken over by Union Army contingents. Officers are availing themselves of their home and provisions while the Mansion House Hotel has been converted into a hospital primarily for Union soldiers though they do allow wounded Confederate prisoners of war to occupy a small wing of the hotel while waiting for transport to a Union prison. James Green Sr. (Gary Cole) believes his family’s well-being demands they acquiesce to Union demands though he chafes when asked to sign a loyalty oath to the North. His feisty daughters Emma (Hannah James) and Alice (AnnaSophia Robb) and wife Jane (Donna Murphy) feel family pride ebbing with every passing day while injured son James Jr. (Brad Koed) wants to join the fighting but is forbidden to do so. Emma decides to visit the hospital where she finds new nurse-in-charge Mary Phinney (Mary Elizabeth Winstead) overwhelmed by hostile doctors, resentful staff, and the wretched conditions. She decides to volunteer to nurse the Confederate wounded after she spies childhood friend and her sister’s fiancé Tom Fairfax (Cameron Monaghan) as one of the patients. Nurse Mary, however, meets firm resistance from the haughty, more experienced Nurse Hastings (Tara Summers) and her cold-hearted, insensitive lover Dr. Hale (Norbert Leo Butz). Only a few people offer Nurse Mary any kind of help or kindness: the dedicated (though secretly drug-addicted) Dr. Jedediah Foster (Josh Radnor), black orderly (with a lot of practical medical experience) Samuel Diggs (McKinley Belcher III), and kindly Chaplain Hopkins (Luke Macfarlane).

Obviously, it’s a dense set of characters Lisa Q. Wolfinger and David Zabel have created for the series (and the above synopsis merely scratches the surface; there are plenty of other heroes and villains lingering in the dark corners and passageways of the hospital and other town structures including, in the final two episodes of the season, John Wilkes Booth ready to take on Abraham Lincoln three years before that fateful night at Ford’s Theatre). But the problem isn’t really with the number of characters or with the sometimes dizzying array of storylines packed into these six hours of television (though if there had been fewer characters, there might have been more time to explore the problematic decision facing most of the black characters in the series: whether to remain as working slaves or to seek freedom in the Union-occupied streets of Alexandria or even to head up North). It’s that some of the characters are painted with too broad strokes: the egotistical, always scheming Nurse Hastings, the semi-competent but deeply unfeeling Dr. Hale, the greedy, sadistic steward Silas (Wade Williams) that seem irritatingly out of place among the better realized characters with their shades of good and bad like the Green family or Emma’s fiancé/Confederate spy Frank Stringfellow (Jack Falahee).

Though the Green family members play major roles in the primary dramatic threads as the series unfolds, the show unquestionably revolves around the world of Nurse Mary as she gains experience and confidence in dealing with the many varied personalities she encounters in her day-to-day working environment. Mary Elizabeth Winstead’s performance is something of a miracle of restraint especially with many of the mule-headed hospital personnel she must constantly deal with to get things accomplished. She and Josh Radnor’s Dr. Foster establish a great camaraderie almost from the start, and all of their scenes together are gems. Other great performances abound: McKinley Belcher III’s proud Samuel Diggs who could show many of the doctors present a thing or two about medical procedure, L. Scott Caldwell’s loyal Belinda, cook to the Green family who decides her days as a slave are over and that she deserves weekly pay for her duties, Gary Cole’s calculating James Green, Luke Macfarlane’s firm but gentle parson, Cameron Monaghan’s sweetly sympathetic Tom, Hannah James and AnnaSophia Robb as the headstrong Green sisters. There really aren't any weak performances, only mediocrely written characters.

Here are the six episodes from season one contained on two Blu-ray discs in this set:

Though the liner notes claim 1080i resolution, the transfers boast full 1080p resolution in the widescreen television aspect ratio of 1.78:1 using the AVC codec. Sharpness is very good throughout, and color is generally excellent with accurate skin tones apart from a slight brown tinge to the color timing likely suggesting the period environment. Contrast is sometimes a bit inconsistent from shot to shot, but it is otherwise not a problem. Each episode has been divided into six chapters.

Though the liner notes claim a 2.0 stereo sound mix, it’s actually DTS-HD Master Audio 5.1. Dialogue has been well recorded and mostly resides in the center channel with an occasional use of directionalized dialogue. David Buckley’s background music score gets the most spread through the soundstage in the fronts and rears. Atmospheric effects seem more rooted to the front channels than to the rear surrounds.

The Green Family (3:01, HD): the five actors who play the Greens on the show: Gary Cole, Donna Murphy, Brad Koed, Hannah James, and AnnaSophia Robb each describes his or her character and how each impacts the events of the story that each is a part of.

Recreating History (4:02, HD): the show’s medical and historical advisors along with producers David W. Zucker, Lisa Q. Wolfinger, and David Zabel and actors McKinley Belcher III, Hannah James, and AnnaSophia Robb talk about the era being depicted on the show.

With fewer storylines and more rounded characters, Mercy Street has the chance to become another very engaging PBS drama series. The Blu-ray set certainly offers excellent picture and sound and some mild bonus material which admirers of the show will likely enjoy viewing.