Things take a decidedly dark turn for our heroes during the fourth season of The X Files. Between battling fatal illnesses and dealing with the continued dark deeds of the nicotine-addicted mystery man, agents Dana Scully and Fox Mulder have an unending set of problems to grapple with as they try to get ahead of whatever conspiracy exists between governmental agencies and alien civilizations. The darkness didn't affect the ratings, however, as the series ended the year for the first time among the top thirty rated shows on television, the first Fox dramatic series to crack into the top echelon of broadcast television. The Emmys came calling to star Gillian Anderson as well as she won Best Dramatic Series Actress while her co-star David Duchovny was nominated for the first time, and the show garnered twelve nominations overall, losing the Best Drama Series prize yet again (this time to Law & Order). 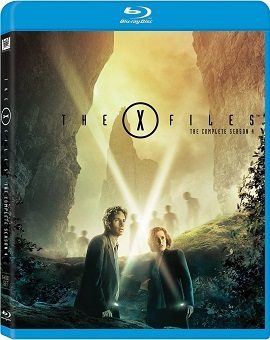 Mulder and Scully manage to survive the alien bounty hunter (Brian Thompson) who was bounding toward them at the end of the previous season, but, alas, several recurring characters aren’t as lucky to survive the Grim Reaper as season four brings about the deaths of at least two recurring (but, for many, important) characters as well as inflicting inoperable cancer on Dana Scully, not surprising since her encounter the previous season with a roomful of other female abductees had revealed all of them to be suffering from a rare kind of cancer that had already claimed several lives. Learning that Scully is so afflicted, her boss Assistant FBI Director Walter Skinner (Mitch Pileggi) must make a deal with the devil, the Cigarette Smoking Man (William B. Davis) from whose influence he had earlier felt freed, and once again agree to do his bidding in the continuing cover-up of alien presences on the planet in exchange for an alien laying hands on Scully and curing her of the disease.

It’s a topsy-turvy year in dealing with extraterrestrials with Mulder always seeming to take two steps forward and three steps back each time he feels he’s getting closer to gaining that heretofore elusive proof of the existence of aliens so he can start getting answers about his own sister’s abduction so many years ago. The season finale episode “Gethsemane” is particularly cruel in having the proof within his reach only to have it once again insidiously removed and once again losing Scully’s support in his quest for the truth. Elsewhere during the season, there are the usual assortments of oddities and unexplainable phenomena: alien drones, inbred killers, an albino killer, a serial abductor, a person with multiple past personalities, black magic blood sacrifices, an alien worm virus, a dream reader, a Chupacabra, a tattoo with a mind of its own, a regenerating man, a golem, a phantom G.I., a time traveler, a shape shifter, and a fetch. There is also a very special episode that gives an enormous amount of insight about the until-now enigmatic Cigarette Smoking Man. The episode doesn’t answer all our questions about this mysterious presence, but it certainly provides an entertaining backstory.

Giving the lead character a fatal disease enabled Gillian Anderson to enjoy a handful of juicy, dramatic episodes that could show her range of emotions in dealing with her plight, impressive enough the score with Emmy voters and win for her the Best Dramatic Actress trophy. And David Duchovny’s Fox Mulder likewise got some outstanding episodes not only dealing with his partner’s sorrow but also a couple of entertaining off-the-cuff episodes (with the actor playing a shapeshifter pretending to be Mulder) which showed the actor’s wry comic range. Both Mitch Pileggi and William B. Davis had spotlight episodes which allowed the actors to show nuances in their characters we hadn’t seen before. Mulder’s nerd posse of Lone Gunmen: Tom Braidwood, Bruce Harwood, and Dean Haglund get to show off in a few well-chosen episodes this season, and there is also more from the continually fascinating villain Alex Krycek of Nicholas Lea, now seemingly a double agent for the Russians. Among guest stars this season in addition to the recurring Brian Thompson, Roy Thinnes, John Neville, and Nicholas Lea are Sebastian Spence, Carl Lumbly, Zakes Mokae, Pruitt Taylor Vince, Richard Beymer, Fritz Weaver, Tom Noonan, Raymond Cruz, Reuben Blades, Paul McCrane, the voice of Jodie Foster, David Groh, Joe Spano, John Finn, and Charles Cioffi.

Here are the twenty-four episodes contained on six Blu-ray discs in the season four set. The names in parentheses refer to the participants in that episode’s audio commentary:

As with the other Blu-ray seasons of The X Files, the original 4:3 framing has been reformatted to 1.78:1 and is presented in 1080p resolution using the AVC codec. Purists may complain, but the results don’t appear to have been compromised when one compares these transfers to clips in the bonus features which have the original framing. As with season three, there are far fewer problems with upconverted videotape establishing shots though there are two or three, and most of the softness comes from glamor photography. With a show that often takes place at night, black levels are especially important, and black levels are quite excellently captured in these transfers with only occasional black crush. Skin tones always seem natural and appealing throughout, and other color values are strong. The shows have been divided into 15 chapters.

The new audio tracks for the series are presented in DTS-HD Master Audio 5.1, and the repurposed sound has been superbly executed to wring the most out of the sound elements which are present (the series’ sound department won another Emmy for this season’s work). There is good separation of effects to fill the surround channels with outstanding panning of planes and helicopters through the soundstage, and there is even occasional directionalized dialogue though most of it is relegated to the center channel. The show’s often eerie, driving Emmy-nominated music by Mark Snow gets a nice spread through the fronts and rears.

Audio Commentaries: though fans of the show will relish these behind-the-scenes tales on the making of the episodes in questions, none of them could be considered mandatory listening, and since they sometimes contain spoilers, first timers with the show might not want to listen until they have finished all the seasons since some future revelations are given away.

Deleted Scenes (16:16, SD): nine scenes are spread out over five of the six discs in the set, some with optional commentary featuring creator Chris Carter.

Special Effects Sequences (10:09, SD): producer Paul Rabwin narrates behind-the-scenes looks at the creation of special effects in certain episodes in brief vignettes on four of the six discs in the set.

Alternate Audio for “Home” : the episode can be played in Dolby Digital 2.0 that features some different sound effects not used in the broadcast version.

FX: Behind the Truth (13:41, SD): thirteen one-minute promo spots featuring various members of the cast and crew which aired on FX when the network began showing the program.

Season four was a high water mark for The X Files as characters received richer development and the conspiracy became ever darker and deeper. The Blu-ray discs feature excellent sound and picture with a generous sampling of previously produced bonus material ported over for fans of the show. Recommended!

Thanks for the review, Matt. Thanks for mentioning that the commentary tracks include spoilers for future seasons. I remember loving this show, but I also watched during a period of my life where there were so many distractions that many of the specifics of the plot and final outcomes have left me. It was just my fun Sunday evening diversion before getting ready for the school week.


I will, no doubt, be tempted to picked up the entire series as a complete set when it goes on sale for some bargain price and your review let's me know it will worth it.

I only watched it sporadically during its run being involved in many other activities, so most of these episodes are new to me, and some of the commentary comments told me things I didn't know were coming up. So I felt it was important to let others know ahead of time.


I'm about halfway through season five as I type this.

I'll second the thanks on the commentary warnings. I haven't seen most of these since they originally aired, so most of this stuff is as good as new to me. I'm glad for the warning - I'll avoid the commentaries until after I've rewatched the entire series.

I'm only up to about half way through S4, and was curious: is there is any actual LFE (0.1) recorded on the discs? I don't especially recall hearing any so far, maybe it's teensy. How about in the subsequent seasons, do you remember any? Thanks.

Edit: what made me ask was one scene that I thought should have had some LFE. It was where a truck bomb exploded beside an oil well. I started listening a bit closer after that, it seemed most of the bass I could hear from the subs was probably just redirected bass from the other channels, like for music. Again, just curious, I know this is pretty "old" TV stuff.
Last edited: Mar 10, 2016

I've heard some on occasion but yeah its really subtle. Basically I've found that most 5.1 remixes of older television shows in general (Simpsons, Star Trek, etc.) tend to not use the lfe channel much so it's not very surprising that X-Files doesn't either.
You must log in or register to reply here.