Who would have seen this one coming?!

Pre-orders are live and they appear to ship internationally at a reasonable price: https://www.randomspacemedia.com/shop-all/p/jumanj-the-next-level-2d-3d-bluray?ss_source=sscampaigns&ss_campaign_id=product-restock&ss_campaign_name=Random+Space+Media:+Your+Item+is+Back+in+Stock&ss_campaign_sent_date=2021-07-01T23:32:52Z

They appear to be a company worth keeping an eye on as "we plan on releasing other 3D titles in the future. We will update the website when those titles are close to being released." Woo hoo! Anyone see this in 3D? Worth it?

We have the 4K and have never seen it in 3D. As a movie it’s a notch or two lower then the first one in this recent series.

This would seem to have amazing possibilities. At the very least, it will have us all speculating about what titles will appear in the future. Check out the list of "Distribution Partners" at the bottom of this page:

Too bad it's in Australia, and there is no news of distribution directly to the U.S. Importing titles from overseas these days is slow and extremely pricey.

Dick said:
Too bad it's in Australia, and there is no news of distribution directly to the U.S. Importing titles from overseas these days is slow and extremely pricey.
Click to expand... 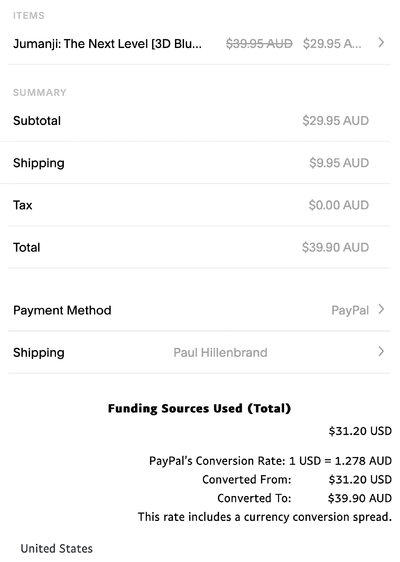 Yup i ordered. Hope to support them and maybe another title will come as well.

If you use a FOREX free CC, it should come out a little under $30. I think PP automatically adds a 3-3.5% Fee to their Currency Exchange like Amazon Converter does -- the current Visa rate is around 1.33 instead of 1.28. $1.20 isn't a big deal for this item, but for folks that do more and/or bigger purchases it can be substantial. There is a way to use PP, pay in local currency, and still let teh Credit Card handle the conversion, but I frequently forget to do the 2 extra steps at the payment stage -- it's a bit confusing the way PP reads when you're doing checkout . I even have a Cap One CC saved to PP to use for that specific purpose and still forgot the last time.

Agreed. I usually let my credit card do the conversion, rather than PayPal as they do pad the rates to their advantage. Of course, as David says, this only works if your CC does not charge a fee for foreign currency exchange.

You have to manually make this choice in the PayPal screen, as it will always default to PayPal's conversion to your local currency.

Great to see some 3D support! Ordered a copy and hope they continue to support our video niche.

I think most recent 3D is all conversion, with only few exceptions. I think that was the driver of all the 3D releases, since any film could be converted rather than having to use special cameras.

Question -- can animation actually be native?

Animation can be native every single time - it's inherently 3d (if we're not talking hand-drawn)!!

And mostly all that needs to be done is to render out a second virtual camera. The depth is already there because 3d/cg imagery is already dimensional. And if we're talking actual animated movies (I know you meant cg animation/vfx for live action), Pixar used to do it every time. Actually even Soul and Luca have stereo versions but we won't ever get to see them because of Disney/Disney+ and their decision not to release theatrically even in countries where people could go to the cinema - it's only info on a hard drive/nothing to do with distribution costs! Huge shame as Pixar actually think about parallax and shooting in 3d as opposed to just adding depth but with the usual 2d shot choice and editing.

Back to this one, the only problem with the live action vfx situation is the same 'problem' with all post vs true 3d situations. Producers don't like it. It makes their beautiful streamlined production pipeline messy. And yes it costs more than farming it off to India or Indonesia. Because it impacts the schedule at rendering stage, then compositing stage and so on. Much easier/less of a headache to just render and comp everything in 2d, then get the 3d conversion houses (done for dirt cheap overseas where heaps of people can be thrown at it) to do it in a short space of time at the very end while the picture/edit is locked and sound is being mixed.

And the thing is post 3d CAN be great. But like anything you have to do it properly, and you do get to the point where you might as well have shot it true 3d in the first place.

Nightmare before Christmas was a great early example where it was done well, ILM even creating 3d/cg versions of the characters to project onto rather than the usual rough shapes in 3d compositing space. Clash of the Titans is infamous for its terrible 6 week post conversion. And the IMAX version of Superman Returns another execrable example with its worse-than-viewmaster rush-job. And only a few scenes at that.

Guillermo Del Toro's Pacific Rim was another post job done right. Initially it was meant to be shot native 3d, but the studio balked at the price (it was already a decent to big budget movie!). And afterwards when they saw how visually amazing it was they changed their mind. Del Toro said we'll do it if we do it right. So while yes, they did have to post-convert the live action footage in the usual way, for the vfx which as I said is inherently 3 dimensional as they're cg models and so on, they did it the right way and rendered out two camera angles. I can't quite remember so don't quote me verbatim but I think this added on 10 months. Which is very different to 6 weeks. Also the approach was a bit different where the 3d depth was physically accurate with the scale and so on. Often with post 3d, things are 'cheated' to give extra z-axis depth, for more dramatic impact. Even though in the real world you don't notice parallax after a certain distance. Anyway, they did it right.

Fury Road even developed a true 3d camera where the interocular distance wasn't locked, but studio shenanigans again messed that one up and turned it into a post situation. And Dredd's smaller/lighter 3d camera makes a mockery of Christopher Nolan's hypocritical/equally biased (given his predilection for shooting with IMAX rigs) rubbish about the cumbersome nature of 3d cameras.

And here we are. Sorry for the rambling, but hopefully that made some sense?

What about the astounding results achieved with “Titanic” and “The Wizard of Oz”?
B

Being an Aussie Blu Ray product, will this play on our USA Blu Ray players?

Brian Alan B said:
Being an Aussie Blu Ray product, will this play on our USA Blu Ray players?
Click to expand...

Ordered! Supporting 3D where I can

TJPC said:
What about the astounding results achieved with “Titanic” and “The Wizard of Oz”?
Click to expand...

I haven't seen it but am looking at Terminator 2. it got great reviews too. I want to get it.

TJPC said:
What about the astounding results achieved with “Titanic” and “The Wizard of Oz”?
Click to expand...

They spent big money on them to get it right, and you could tell. Didn't I read somewhere that Disney spent $10 million to convert The Lion King to 3D? Result: the 3D version grossed over $100 million.
You must log in or register to reply here.