Inspired by a short film of the same name, Pixels has been showing up on many Worst 10 lists lately, and was even the butt of a few jokes at the recent Golden Globes, particularly after Ridley Scott’s The Martian won Best Picture in the Musical or Comedy category. I can’t say that I blame them, as I’m not a big fan of Adam Sandler, who produced and stars in the film, and was directed by Chris Columbus. 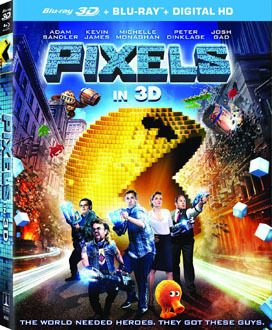 In 1982, a time capsule including many of the top video arcade games is shot out into space as a way to possibly communicate with an alien race. That signal is misinterpreted, and thirty-three years later, a U.S. military base in Guam is attacked by what appears to be the villains from the game Galaga. President Cooper (Kevin James) calls on his childhood friend Brenner (Adam Sandler), who works for Nerd Brigade as a home theater installer (who apparently only installs Sony products), to consult him on the attack in Guam. Brenner is then kidnapped by Ludlow (Josh Gad), a conspiracy nut who has also discovered the alien attack. Brenner, Cooper, and Ludlow were videogame champions back in 1982, only to be defeated by Eddie Plant (Peter Dinklage), who fell into a life of crime. Soon after, the Taj Mahal in India is destroyed, and Brenner and Ludlow crack the code to discover that the next attack will be in the United Kingdom. Cooper brings in Lt. Colonel Violet Van Patten (Michelle Monaghan), who devises a weapon to combat the aliens, and has Brenner and Ludlow train the military on how to use them in the video game battles. But Brenner and Violet have something of a history - just prior to the attacks, Violet had hired Brenner to install a TV and PlayStation 4 at her home for her son. It leads to a love-hate relationship that (obviously) blossoms into a romance. Needing another “Arcader” to battle Pac-Man through the streets of New York, they reluctantly turn to Eddie Plant, who helps them win, but at a cost, leading to what could end up as the total annihilation (or pixelation) of planet Earth.

As I stated above, I am not a big fan of Adam Sandler. I do not understand his appeal, nor do I find him remotely funny. I’ve often equated his movies (and those of Seth Rogen) to the Burt Reynolds comedies from the late 1970s and through most of the 1980s, where it seemed like the studios were essentially financing one long party for the star and his friends in movies like Cannonball Run, Smokey and the Bandit II, Stroker Ace, etc. While Pixels fares much better than some of Sandler’s previous films (the worst being Grown Ups, Jack and Jill, That’s My Boy, and Grown Ups 2), it’s still a film that had potential but wound up handicapped by Sandler and his usual co-stars (in this case, Kevin James and Josh Gad). Michelle Monaghan has the thankless role as Sandler’s love interest, her awkward mugging to the camera and attempts at broad comedy often fall flat, and there is no chemistry between her and Sandler whatsoever. She’s a good actress who has excelled in big movies before (Mission Impossible 3, Eagle Eye, and the HBO series True Detective), but appears to be slumming it here. The only actor that has some funny moments (and those are still few and far between) is Peter Dinklage, who seems to be taking advantage of his star-making turn in Game of Thrones by appearing in at least one big summer movie each year. The big surprise (or disappointment, depending on how you look at it) is finding out that the film was directed by Chris Columbus, who must have fallen on some hard times to be directing an Adam Sandler movie. The director who began his career with the cult favorite Adventures in Babysitting hasn’t had a hit movie since Harry Potter and the Chamber of Secrets in 2002.

Pixels arrived on disc on October 27, 2015 on DVD, Blu-ray, and a Blu-ray 3D/Blu-ray combo set. The 2D presentation and the bonus features are on on disc, with the 3D version on a second disc. The 2D presentation is about what one would expect from a recent theatrical release, preserving the film’s original aspect ratio of 2.40:1 and compressed at 1080p using the AVC codec. Colors are strong and well-saturated, detail is exceptional (particularly in close-ups of the actors), yet contrast wavers from exceptional to weak, with darker sequences suffering from noticeable black crush.

The 3D version fares slightly better (compressed using the MVC codec), with more vivid colors than its 2D counterpart, and slightly better contrast during those darker nighttime battles. Pixels was not shot in native 3D, with Prime Focus World completing the majority of the 3D conversion. And as a conversion, it’s not bad, going more for depth than forward protrusion. The video game battles benefit the most from the conversion, adding a great sense of depth particularly during the centipede sequence. Standard dialogue scenes appear more subtle, almost flat. This is the second 3D movie I have screened on my new LG 65UF8500, with ghosting and crosstalk virtually non-existent.

Here’s a bit of a head scratcher. Sony has included a Dolby Atmos (with backwards compatible Dolby TrueHD 7.1 and Dolby Digital 5.1) on the 2D disc, but only graced the 3D version with a DTS-HD MA 5.1 soundtrack. This is strange, because the 2D disc takes up 35.2 Gb, only 2.5 Gb smaller than the 3D disc (37.7 Gb), yet maximum capacity on a BD50 is supposed to be just shy of 50Gb. That leaves around 10 Gb left to include a Dolby Atmos track (even more if the DTS-HD MA track was dropped). Both tracks sounded virtually identical when played through my Marantz SR5008 receiver, mixed down to 5.1, with a slight edge to the Dolby TrueHD track on the 2D version, which had a slightly stronger LFE presence. Dialogue was clear, directed mostly to the center channel with some occasional panning throughout the room. Henry Jackman’s score and 198s pop hits filled the room nicely, with very active surrounds when necessary.

Dolby Atmos: I am also frustrated that Dolby Atmos is only on the 2D version. You shouldn't have to choose between 3D audio and 3D video. I watched Pixels on a 7.2.4 system (4 ceiling speakers). I have almost 20 Dolby Atmos Blu-rays under my belt and I would put this in the middle. There was a good use of the overhead speakers during the video game battle scenes especially centipede when the action takes place overhead. Outside of the bigger action pieces, the overheads where used conservatively, but effectively for applause, weather/wind and other ambient sounds.

The Space Invader (1080p; 1:40): A contest was held at the 2014 Comic Con in San Diego where the highest scoring player in Space Invaders would win a cameo in the film.

Photo Gallery (1080p): A series of 41 production stills from the movie.

Pixels Play Along Game App: The app supposedly allows you to “use your mobile device to battle your favorite characters and play pop-up trivia.” Twenty-five minutes into the movie, I was asked a total of three trivia questions, with the next game starting in another twenty minutes. I gave up at that point.

While Pixels was not quite as bad as I had expected, it still was a bit of a chore to get through. The extras are short and not all that interesting, but the presentation is excellent, despite the downgraded audio on the 3D version.

Thanks for the review, Todd. I thought this was a great concept for a movie, but I completely lost interest in that concept with Adam Sandler doing it. The trailers made it seem like it was a typical Adam Sandler movie just played on top of this good idea. I would have loved to have seen someone taking this on in a more serious manner - not saying that the movie had to be a drama, but just someone who would be believable as a character and not just playing the same persona we've seen a thousand times before.

I guess I have a higher tolerance for Adam Sandler than most. I enjoyed Grown Ups (the first one), 50 First Dates, and the one where he was a dentist. The others I can do without. This one was pretty good, granted I watched it with 10 year olds The back story with Adam S as geek squad style employee with access to Kevin James as the president was pushing it, but I liked the concept overall.

Oh please don't associate Seth Rogan with Sandler. At least I find the former funny some of the time.

Oh brother!
You must log in or register to reply here.