Dracula and his friends return in Hotel Transylvania 2, continuing the story of his daughter Mavis and new son-in-law Jonathan as expecting parents. As an Adam Sandler vehicle, this one is somewhat enjoyable compared to the actor’s other more recent efforts. 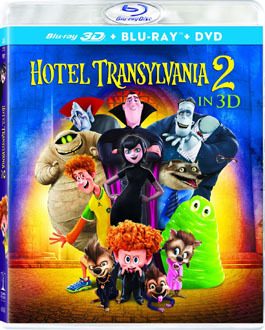 As Hotel Transylvania 2 opens, Mavis (voiced by Selena Gomez) and Jonathan (voiced by Andy Samberg) are getting married. Dracula (voiced by Adam Sandler) has accepted Jonathan as his son-in-law, throwing a big wedding ceremony and reception at his hotel, and meeting Jonathan’s parents (voiced by real-life couple Megan Mullally and Nick Offerman) for the first time. A year passes, and Mavis and Jonathan announce that they are expecting a baby. Drac secretly wonders if the child will be a vampire or a human, but assures the young couple that it doesn’t really matter to him. When Dennis (voiced by Asher Blinkoff) is born, he appears human, but most vampires don’t show their true nature until their fifth birthday. Drac becomes obsessed with making sure Dennis is a vampire, taking the youngster on a road trip with Drac’s buddies Frankenstein (Kevin James), Wayne the Werewolf (Steve Buscemi), Griffin the Invisible Man (David Spade), Murray the Mummy (Keegan-Michael Key), and Blobby in an attempt to scare the fangs out of Dennis while Mavis and Jonathan take a brief vacation to Santa Cruz, California. When Drac’s plan backfires (quite literally), Mavis returns home and announces that she, Jonathan, and Dennis will be moving to California after Dennis’ fifth birthday party, and has invited her grandfather, Vlad (voiced by Mel Brooks), to the party as a last chance to meet his grandson. However, Vlad is very old school, hating humans and believing that they have made his son, Drac, soft. Drac and Jonathan hatch a plan to keep Dennis’ human heritage a secret from Vlad, which again backfires but ultimately mends the relationship between Vlad and Drac.

As I stated in my review of Pixels, I am not a big fan of Adam Sandler, who not only lends his vocal talent as Drac, but also co-wrote and co-produced this sequel to the 2012 original. Here, though, the animation and his vocal talents made him much less annoying and generally amusing. Or perhaps it may have been that Andy Samberg’s vocalizations as Jonathan were even more irritating and juvenile, and the idea kept floating in my mind that he was unfit to be a parent. The good news is that Selena Gomez as Mavis actually brought a maturity to the parenting duo that provided some balance to the relationship (even though, in real life, Samberg is old enough to be Gomez’ father). The movie is more a string of skits held together by a weak plot, but overall it is mildly amusing and the younger crowd will likely enjoy the gross-out and bathroom humor, as well as the semi-scarey moments. The supporting cast also does a fine job, aided by the cartoony, Looney Tunes animation style of director Genndy Tartakovsky (Samurai Jack, Dexter’s Laboratory).

Hotel Transylvania 2 arrives on Blu-ray in either a 2D Blu-ray/DVD combo pack, or a 3D Blu-ray/Blu-ray/DVD combo pack. Sony sent me the latter, and it is a visual treat for the eyes. The 2D disc features an eye-popping 1080p transfer in the film’s theatrical aspect ratio of 1.85:1, compressed using the AVC codec. Colors are unusually bright for a film of this type (which the director explains in his commentary track), but are consistent and well-saturated throughout. Contrast is also excellent, with deep blacks that don’t appear crushed, and bright whites that never clip. Detail is also well-defined, providing nice hair and fabric textures.

The 3D version is contained on a second Blu-ray disc, compressed using the MVC codec. The majority of the 3D effects utilize depth over any forward projection. While the depth is noticeable, it is still fairly shallow throughout most of the film. There are maybe one or two moments of any slightly visible popout. I did notice some minimal ghosting during a scene where Drac and Dennis are standing in front of a full moon, but that may be due to the brightness of the moon and how my display (an LG 65UF8500) handled that image.

The DTS-HD Master Audio 5.1 track (available on both 2D and 3D versions) is where this disc really shines. The track features an expansive soundfield, with great separation and discrete effects, and an impressive low-end thanks to an active LFE channel. Dialogue was clear, directed mostly to the center channel with some occasional panning throughout the room. Mark Mothersbaugh’s (Pee-Wee’s Playhouse, The Lego Movie) fun score is spread evenly across all channels.

Audio Commentary with Director Genndy Tartakovsky: This is the better and more interesting commentary tracks of the two provided on this release. Tartakovsky is a well-spoken individual, easy to listen to, and provides a nice technical commentary track with added tidbits on the writing, animation, and recording processes in the movie.

Audio Commentary with Adam Sandler, Robert Smigel, and Allen Covert: This track was a waste of time, with the three men having as gab fest while the film is running, occasionally offering minor insights into the film, but spending most of the time joking with one another in what sounds like a bathroom.

Monster Lullaby Scary-oke Sing Along with Dennisovitch (1080p; 3:57): Dennis asks the audience to sing along with pun-infested versions of some classic lullaby songs, Hush Little Monster, Twinkle, Twinle Little Bat, and Vlady Had a Little Drac.

Make the Scary Sounds of Hotel Transylvania 2 (1080p; 6:24): Foley artist Robin Harlan demonstrates how many of the movie’s sound effects were created using simple household items. This is a fun featurette that kids will likely enjoy participating in, and plays automatically at the conclusion of the movie on the 2D Blu-ray disc version.

How to Draw Your Favorite Characters (1080p; 5:04): Asher Blinker (the voice of Dennis) learns how to draw some of the characters from the film from Production Designer Michael Kurinsky.

“I’m In Love With a Monster” Music Video (1080p; 3:42): The all-girl group perform the song with clips from the movie interspersed throughout.

Character Sketch Gallery (1080p): A series of 90 sketches and production art from the film.

I can’t believe I’m saying this, but Hotel Transylvania 2 is an enjoyable, entertaining animated diversion from Adam Sandler, featuring some nice vocal performances and fluid, stylish animation, boasting an almost reference quality video and audio presentation, although the 3D was mildly disappointing with its shallow depth and minimal popout. The special features are aimed more at the main audience for the film, without going into too much technical details on what went on behind the scenes.