About 10 years ago, my wife decided she wanted to rearrange the living room. In doing so, the tv stand was moved to a different wall and it was no longer practical to have my dipole surrounds mounted on the walls in their original locations. Because of the shape of our living room, I could no longer place them properly and I had nowhere else to put them so they went into storage. I was also doing a lot of gaming and needed room under the tv to put my game consoles so I disconnected my center channel and put it in storage with the surrounds. My mighty 5.1 HT became a 2.1 with a phantom center channel overnight. This wasn't nearly as good as a 5.1 HT but I'm pretty good at compromise and a happy wife equals a happy life.

Fast forward about 10 years. Since we are working on buying a new home and moving in a few weeks (and my wife has promised me one of the rooms in our new home will be mine to use as a dedicated HT ), I decided to get out my center channel and surrounds and make sure they still work. I quickly discovered all the ferrofluid had leaked from the tweeter in my CC-350 and it no longer produces anything close to a pleasant sound and the foam surrounds for the drivers in my ADP-170s have dry rotted. The Monitor 9s and Servo-15 still work fine since they’ve been in the living room and getting weekly, and more recently, daily use.

Would it be worth trying to source a replacement tweeter and replacement drivers for these? I thought about replacing them with some of Paradigm’s current offerings but I don’t know how much Paradigm has changed the Monitor line over the years so I don’t know if it would even be possible to timbre match current Monitor SE center and surrounds to a pair of 20+ year old generation 1 Monitor 9s.

Another possible option would be to just go with a completely new line of speakers. I’ve looked online at new Paradigms (the Monitor SE, Premier, and Prestige Series) and also looked at the Elac Debut 2.0 line, in particular the DF62 towers, DC62 center, and DOW42 on-wall for surround. At current prices, I could buy the mains, center, and surrounds for about $1,100. I’m unfamiliar with Elac speakers but have read some good things about them here. I have no idea how they stack up against a lot of other speaker brands though. I’m not looking to replace my Servo-15 sub anytime soon. If and when I do, I’ll most likely look at SVS.

My current receiver is the venerable Yamaha RX-V995 that refuses to die. I’m kind of hoping it will quit working though, so I can upgrade to something newer with HDMI. I’m eyeballing the Marantz SR6014. That’s one sexy looking receiver. I also have an Anthem MCA-5 5-channel amp that has been sitting, disconnected along with my Behringer Feedback Destroyer, in my AV rack for about 5 years. The last time I had the amp connected, it seemed to work fine.

The room I will be using in the new home has a vaulted ceiling that is probably 12’-15’ high along the wall where I will have my display and mains, and about 8’ high at the back of the room so there will be lots of open space above the listening position. I do not have the exact room dimensions and will not for a few weeks. I am not planning on setting up for Atmos, as 5.1 is good enough for me and I can always go 7.1 later on if I decide to.

Any thoughts or speaker suggestions are welcome.

I would lean toward replacing the ailing speakers rather than repairing them. For one thing, soundtracks have evolved and dipole surrounds aren't as good an option as they used to be. Direct radiating tends to be preferable now. You could try to keep your front Paradigms and get new Paradigm or ELAC the rest of the way around. If you can get them to blend well, which I think you probably can, then you can stick with that. If not, then replace the L/R with a matching model. Nothing lost by trying.

If you have that amp, why not get a Marantz pre/pro instead of a receiver? You can get a refurb AV7705 for about the same price as an SR6014, then use the Anthem amp. Much better solution than a receiver, in my book. You shouldn't even give it a second thought. Get some XLR cables to connect them, since both components have balanced connections and hook up a trigger wire, which they also both have, so the amp turns on automatically. Why are you even questioning it?
Reactions: Clinton McClure

Thanks for the reply, John. I will most likely just replace the center and surrounds. I may give ELAC a listen if I can find a shop that has them on display. According to their website, my local Best Buy carries them but I don't know if any are set up on display and I know for a fact that they don't have an isolated listening room there. I may have to check around the few remaining stereo shops in Little Rock and see if anyone carries them. It doesn't matter to me if the enclosures aren't as flash as higher end speakers. It's what's inside the box that counts. The A/V store where I have always bought my gear closed about 5 years ago, only leaving one actual professional store close to me. The rest are about an hour away, including the only authorized Paradigm retailer left in Arkansas.

I've been weighing whether to buy a pre/pro instead of a receiver. Like you pointed out, I already have the amp and can get a refurb Marantz pre/pro for about the same price as the receiver. My biggest fear is that I'll spend $1500 on a pre/pro then this 20 year old amp will quit working and I'll have to spend another $2800+ on a new amp or start pouring money into this one trying to get it repaired. I'm gong to be taking on a mortgage at the same time so my disposable income will be at an all time low for the next few years.

I still have a few weeks to read, research, and think about everything. My facetious hope that my Yamaha receiver would quit working might be happening. I generally watch movies with headphones while my wife is sleeping and the left channel of the ¼" headphone jack stopped working late Friday night.

You can also go with Emotiva's Basx line and save some money. Audiophile quality gear doesn’t have to be overly expensive or complicated.

I honestly haven't had time to price amps so I was just going off MSRP of Anthem's latest entry level 5-channel amp.

I heard back from Paradigm support today. They say the current Monitor SE center and Atoms should match fine with my v1 Monitor 9s. If I choose to go that route, it will save me several hundred bucks that I can put towards a new receiver or pre/pro when I move.
Reactions: JohnRice

Before replacing the center channel, I’m attempting a quick fix. The tweeter dome and diaphragm didn’t appear damaged but what was left of the ferrofluid was a thick sludge. I cleaned all of the old fluid out and replaced it with a vial of new fluid from Parts Express. Everything came apart and went back together very easily. I haven’t had a chance to calibrate my speakers for the new room or even see if the tweeter passes sound but I did manage to get everything in the front of the room in place. 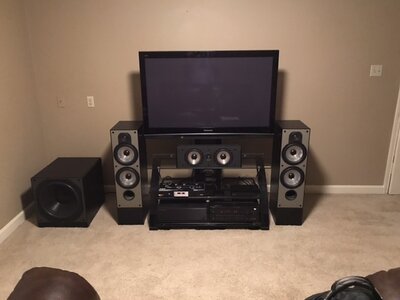 Cool. Is that a PSA sub?

After powering everything on to calibrate and test, there is a noticeable ground loop hum I’ve never had before. It’s not a show stopper but I’m definitely going to work on it this weekend as time permits.

It seems as though replacing the ferrofluid in the center channel might have worked. I tried several different Blu-rays and center channel dialog is very clear. I’m currently enjoying The Hitchhiker’s Guide to the Galaxy on Blu-ray and it sounds like a new tweeter.

Ground loops are a real pain. The most common source is cable tv.

No cable tv in that room. Here’s the setup:

Panasonic plasma, Yamaha receiver, Anthem amp, TV, and Blu-ray player are all plugged into a Monster power center. I had the sub plugged into it as well but the hum was really loud. Removing the sub’s AC to its own wall outlet dropped the hum considerably but it’s still there. The Blu-ray player is connected to the receiver via digital coax and the TV is connected to it via toslink cable. Both also have an hdmi cable connecting them to the plasma. (Hopefully I can upgrade the 20+ year old receiver soon.)

The hum is louder when the plasma is set to the hdmi input for the TV. Turning off the plasma instantly kills the hum.

As it turns out, what I thought was a ground loop hum is actually caused by my plasma tv. With the receiver and amp both powered off, the hum is still there. I can eliminate it by either turning off the plasma tv or turning down the “picture” setting of the tv. I’ll have to look in the user manual to see what the “picture” setting is for.
You must log in or register to reply here.