David Soren’s Turbo is another in the series of Dreamworks Animation’s CGI family comedy titles. It’s fast and reasonably entertaining, but the storytelling and character development is strictly by the book with all of the expected beats hit in its underdog makes good story and with no surprises. As usual, the animation is first-rate and there are entertaining performances from its famous voice cast, but don’t expect to see anything here that’s original or unique. 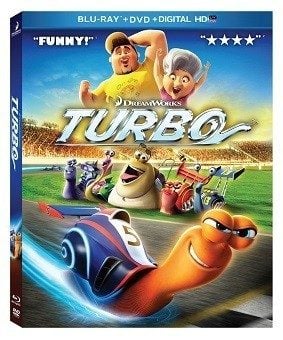 Garden snail Theo (Ryan Reynolds) may be stuck doing rudimentary chores with garden maintenance, but he dreams of being a super fast snail competing in the Indianapolis 500, just like his idol champion driver Guy Gagné (Bill Hader). Brother Chet (Paul Giamatti) tries to keep Theo grounded, but his dreams for speed lead him to an illegal street race in Van Nuys, California, where he ingests some nitrous oxide and becomes a supercharged speed racer who renames himself Turbo. When taco restaurant co-owner Tito (Michael Peña) sees Turbo in action and gets the hint that he wants to race at Indy, he learns that there’s nothing in the rules that prohibits snails from racing. Thus, Turbo gets entered in the race with a pit crew of other snails there to lend moral support but must face these monster racing machines which might easily run over the tiny Turbo no matter how fast he is.The cleverest aspect of the script by director David Soren, Darren Lemke, and Robert Siegel is the parallel story of sibling snails Theo and Chet and Mexican brothers Tito and Angelo (Luis Guzmán). In both cases, the elder brother tries to quash the big dreams and imaginations of his younger sibling, but each refuses to knuckle under to thinking small and simply embracing the status quo. But every other aspect of the story: the underdog dogma “No dream is too big; no dreamer too small” that drives the story, the egotistical champion who’ll stop at nothing to win, the plucky support group, the race itself with its predictable come from behind victory is just paint-by-the-numbers plotting (the film even works in expected rock songs like “We Are the Champions” and “Eye of the Tiger” with little imagination). Dreamworks has hired wonderful actors to voice these characters, but they mostly only bring their own built-in personas to the parts and don’t play anything they haven’t played in countless other appearances (Samuel L. Jackson’s ornery, bombastic pit crew leader Whiplash is a good case in point). The animation is, as always, commendable: the Indianapolis 500 race is thrillingly conveyed in animation (and would likely be a 3D showcase sequence; sadly, Fox only sent the 2D version for review), and even the early garden sequences with their daily perils (swooping crows, the nasty kid on a tricycle, the committed gardener) and a towering jungle of thriving tomato plants make interesting worlds for the animators to deliver to the audience.Ryan Reynolds and Michael Peña both do commendably as the plucky snail and taco stand owner respectively who simply won’t take no for an answer. As their critical siblings, Paul Giamatti and Luis Guzmán are likewise entertaining. As residents of the Starlight Plaza strip mall where Tito and Angelo’s taco stand attracts as few customers as their own businesses, Richard Jenkins as Bobby, Michelle Rodriguez as Paz, and especially Ken Jeong as nail salon proprietress Kim Ly steal all of their scenes and might have had their parts beefed up had the emphasis not been on the racing story at the center. Samuel L. Jackson (Whiplash), Snoop Dogg (Smoove Move), Maya Rudolph (Burn), Ben Schwartz (Skidmark), and Michael Patrick Bell (the profoundly unmysterious White Shadow, the funniest of the crew) all add their familiar personas to the mix as Turbo’s enthusiastic pit team.

The film’s theatrical aspect ratio of 2.35:1 is faithfully delivered in a 1080p transfer using the AVC codec. As is usually the case with these CGI animated films, the imagery is stunning: razor-edged sharpness, brilliant colors of every possible hue, and contrast dialed in to perfection. Black levels are jet black, and no artifacts mar the pristine picture on display. The film has been divided into 28 chapters.

The DTS-HD Master Audio 7.1 sound mix is a full-bodied rendering of the theatrical soundtrack. There are plenty of split surround effects that are channeled through the fronts and rears and panning effects from front to back and across the soundstage are common during the racing scenes. The back surround channels don’t seem to have been used quite as creatively as they might have been, but the LFE channel gets a big workout from the massive engines of the Indy racers. Dialogue has been superbly recorded and can be found in the center channel.

Champion’s Corner (5:00, HD): TV sports announcer Paul Page interviews new Indy champ Turbo, and they also discuss the 2012 Indy 500 race where clips from Dario Franchitti’s victory are shown.Smoove Move’s Music Maker (12:47, HD): six songs used in the film are presented in a music video-like manner and can be watched separately or in montage form.Team Turbo (2:40, HD): brief character introductions to the five members of Turbo’s crew and Turbo himself.Deleted Scene (2:03, HD): director David Soren introduces this brief clip which was slated to be the original introduction of the character of Tito.Storyboard Sequence (2:25, HD): the early street race in Van Nuys is shown in its storyboard layout with the actual finished film shown in a small window.Be An Artist (1:00:56, HD): head of character animation David Burgess gives art lessons on drawing the eight main snails in the movie and offers other suggestions for improvising on them.Shell Creator Game (HD): an interactive game which allows the user to design and customize shells for various snail characters in the film.Theatrical Trailer (2:26, HD)Promo Trailers (HD): The Croods, Shrek the Musical, Epic, Turbo F.A.S.T., among othersDVD/Digital Copy/Ultraviolet: disc and code sheet enclosed

Certainly an entertaining if undemanding and not very original family comedy, Turbo doesn’t quite have the humor or pathos that can be found in some of Dreamworks’ best animation efforts. But the 2D version offers splendid visuals and some fun activities for youngsters on the disc.