Playing supporting characters in Dreamworks Animation’s Madagascar franchise, they now have a feature film all their own in Penguins of Madagascar. The film is pretty much as one would suspect – loud, frantic, and filled with action with lots of sarcasm and a degree of wit both visual and verbal – but these funny and fun-loving action characters kind of run out of steam on their own before their ninety-minute movie ends, and the film doesn’t linger in the mind as anything more than a passable good time. 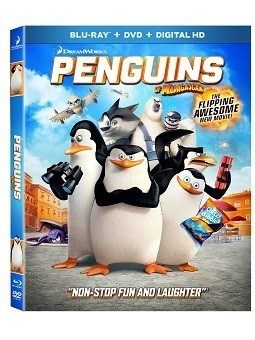 Beginning in Antarctica when the youthful Skipper (Tom McGrath), Kowalski (Chris Miller), and Rico (Conrad Vernon) watch the birth of Private (Christopher Knights) from an orphaned egg and carrying on into their adulthood traveling the globe on a series of adventures, the quartet find themselves being hunted by the nefarious octopus Dr. Octavius Brine/AKA Dave (John Malkovich) who has a lifelong vendetta against the cuddly creatures who have pushed him out of every comfortable zoo and aquarium gig he’s ever enjoyed. He has a scheme to capture all the penguins he can and turn them into monsters using something he calls his “Medusa serum.” The gang tries their best to outmaneuver Dave, but he has too many octopi helping him, but luckily for our heroes, there is a separate covert organization trying to bring Dave down – The North Wind led by an all-business wolf (Benedict Cumberbatch) whose name is classified, so that’s what they call him – Classified.

Michael Colton, John Aboud, and Brandon Sawyer score screenplay points for stringing together a series of frenzied action scenes (the chase scene in Venice is particularly hyperactive and we also visit Kentucky and Shanghai) for our adventurous penguin friends that allow wonderful visual gags (the penguins rolling across black and white road markers blending in with them is particularly hilarious) and a continual stream of banter between the penguin corps and their adversaries (kudos for directors Eric Darnell and Simon J. Smith). But by the time we get to the climactic sequence where the serum has turned all the birds into (not all that horrible) creatures (with the same voices and personalities), it’s not all that funny or interesting, giving off something of an anticlimactic feel that we’ve waited all movie and this is the feeble payoff. The second heroic team the North Wind, stuffier and more formal in organization and demeanor, is the antithesis of the penguins in some ways and yet while their presence and interaction provides some good gags and their animation is first-rate, more could have been done with them to give them a sharper sense of fun and more developed personalities.

The penguin voice work is very familiar from the Madagascar feature films and the Penguins television series, and Tom McGrath in particular as the not-too-bright Skipper brings lots of fun and more than a small degree of charm to the proceedings, and the movie offers a decent payoff for the undervalued Private who's always trying to earn Skipper's commendation on a job well done. But the movie is stolen by John Malkovich’s over-the-top villainy as Dr. Octavius Brine/Dave and Benedict Cumberbatch’s smooth-as-silk (until he’s surrounded by stupidity that makes him lose his cool) commander of the North Wind. These two award-winning actors bring so much personality and zest to the movie that they’re a treat every time their characters are on screen. The other members of the North Wind - Ken Jeong, Annet Mahendru, and especially Peter Stormare suggest a spy film with this group or working in tandem with the Penguins might not be a bad sequel idea.

The film has been framed at its theatrical 1.85:1 aspect ratio and is presented in 1080p using the AVC codec. As with all of Dreamworks Animation’s features, the animation is superb and is captured beautifully on Blu-ray disc with outstanding sharpness and eye-popping color design. There is no color smearing or blooming, and there is no banding to be seen in the finished product. Contrast has been consistently and expertly applied, and black levels are quite impressive. The movie has been divided into 28 chapters.

The film was released in a 3D version to theaters, and there is a 3D Blu-ray available, but it was not provided for review. Dreamworks Animation projects are typically much more aggressive in their use of 3D than Disney/Pixar films, and the bountiful action sequences in 2D suggest that the 3D version might make the multiple action scenes that much more enjoyable.

The DTS-HD Master Audio 7.1 sound mix makes wise and wonderful use of all available channels whenever the action demands, and since the movie is so action heavy, that means the channels get frequent and quite clever uses. Dialogue has been well recorded and is given a directionalized presence on several occasions. The use of music, both soundtrack songs and the background score by Lorne Balfe, gets wonderful spread through the fronts and rears, and sound effects likewise get split for optimum effect during all of the moments of spirited activity found here.

Flipper Slap Shake Waddle and Roll (2:06, HD): a theme song for the Penguins is presented.

Do the Penguin Shake (2:26, HD): dancer/ choreographer tWitch demonstrates how to do the “Penguin Shake” and is then joined by Skipper, Kowalski, Rico, and Private in performing it.

Deleted Scene (1:20, HD): after explaining in an introduction (0:29) that there were no real deleted scenes, Skipper presents one sequence in an artist’s rendering that was considered but not completed.

Madagascar Mash Up (3:12, HD): a compilation of penguin missions found in the three Madagascar feature films.

Global Flight Plan (1:29, HD): a summary of the many locations where action in this movie takes place.

Image Gallery (HD): twenty-seven still images from the movie which can be stepped through by the viewer.

The youngsters in the family who are fans of the title characters will no doubt enjoy Penguins of Madagascar, and the adults in the house will also find it spottily amusing, but there is a better film, funnier and more adventurous, out there somewhere for these wonderful characters, and for those who are 3D equipped, that version would seem to be the preferred edition.

I blind bought the 3D version on the basis of a solid recommendation from BBC film critic Mark Kermode (which is ironic, since he hates 3D). Will let you know how it looks.

Thanks so much, Stephen. I would very much like to know how effective the 3D is, not only to be part of this thread but also in case I find the 3D version for sale at some point and get it for myself (as I did for The Croods last year).
You must log in or register to reply here.