The iconic late 1970s science fiction television series, Battlestar Galactica and its spinoff Galactica 1980 arrive on Blu-ray, remastered and mostly restored in both a Definitive and Remastered collection box set. The Remastered set presents the series in a recomposed 16:9 widescreen. 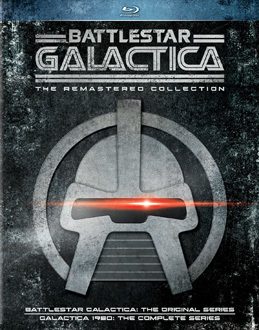 With the success of Star Wars, ABC and Universal Television were desperate to cash in on the renewed interest in science fiction. Glen A. Larson, one of Universal’s top TV producers (McCloud, Quincy, M.E.), created and wrote the pilot episode for Battlestar Galactica, which premiered with much triumph and fanfare on ABC on Sunday, September 17, 1978 as a three-hour TV-movie event, with visual effects produced by John Dykstra, one of the pioneers on Star Wars. TV veteran Lorne Greene (Bonanza) played Commander Adama, leading the crew of the Galactica in search of Earth, after their home worlds (12 in all) are attacked and laid waste by the Cylons. Leading the warriors, tasked with protecting Galactica from further attack by the Cylons, are Adama’s son, Captain Apollo (Richard Hatch), ladies man and gambler Lt. Starbuck (Dirk Benedict), Lt. Boomer (Herbert Jefferson, Jr.), Colonel Tigh (Terry Carter), and Adama’s daughter, Athena (Maren Jensen). After a romantic subplot over the first few episodes between Apollo and single mother Serena (Jane Seymour), Apollo finds himself a step-father to young Boxey (a pre-NeverEnding Story Noah Hathaway). The series lasted only one season, consisting of 24 episodes (if you count the pilot as three and a 2-hour episode as two), cancelled due to dwindling ratings and rising costs (which led the producers to recycle many of the visual effects shots).

After a letter-writing campaign by fans outraged over the cancellation, ABC and Universal approached Larson about possibly rebooting the series, but at a reduced budget. The result was Galactica 1980, moving the storyline ahead 30 years with Adama finally finding Earth. But this reboot was quite different from the original series, set in modern-day Los Angeles with the crew trying to help the inhabitants of Earth improve their technology to a level where they an defend themselves against the Cylons. The only cast members to return were Adama (again played by a now-bearded Lorne Greene) and Colonel Boomer (Herbert Jefferson, Jr.). Boxey is now all grown up, going by the name of Captain Troy, and played by Kent McCord (Adam-12), and has a sidekick, Lt. Dillon (Barry Van Dyke). Troy and Dillon meet TV journalist Jamie Hamilton (Robyn Douglas), who joins them on many of their adventures. Galactica 1980 is a much cheesier series than its predecessor, with way too many fish out of water jokes and a more streamlined effects budget that, in the first episode, uses effects shots from Earthquake as the backplates for the Cylons attack on Los Angeles. The series debuted on ABC as a replacement in January of 1980, and was cancelled before the eleventh episode was completed, with only ten episodes officially in the can and aired.

Disc Six:
Experiment in Terra
Take the Celestra
The Hand of God

Universal has gone back to the original 35mm broadcast reels and scanned both Battlestar Galactica series at 2k. That’s the good news. The mixed news is that Universal has remastered the series in both the original 1.33:1 broadcast aspect ratio and a cropped 16:9 widescreen aspect ratio. The bad news is that the only way to get the original broadcast aspect ratio is to purchase the more expensive Definitive Collection. Are the widescreen transfers really that horrible? The answer would be no, as some thought was made into how these episodes were cropped without sacrificing too much visual information and still providing an acceptable amount of headroom for the actors. These 16:9 recomps are a bit soft, mostly due to the fact that I suspect the technicians zoomed in on the 2k scan of the original 1.33:1 frames, as due exhibit some minor aliasing issues that show up on a few rare occasions (the most obvious is the “A Glen A. Larson Production” title card at the beginning of the pilot episode. Colors are consistent, but contain a slightly blue tint that alters the color accuracy of the image. In addition, the overall brightness seems a bit darker than one would expect of a late 1970s or early 1980s television show. Contrast is acceptable, but there is some very minor crushing in the blacks here and there. Scratches and blemishes have been cleaned up considerably when comparing the episodes with the same footage as seen in some of the documentaries that were ported over from the previous DVD release from 2003, but there are still some scratches visible when ships go into turbo, likely baked in from the optical effects processes used at the time of production.

Battlestar Galactica has been granted a DTS-HD-MA 5.1 remix, while Galactica 1980 gets just a DTS-HD-MA 2.0 stereo mix. Both sound very good, but nothing to get overly excited. For Battlestar, the 5.1 gives the score by Stu Phillips a bit more room to breathe, spread across the entire soundstage. It’s still a very front-heavy mix (which, considering its mono source, is understandable), with dialogue directed to the center channel that is clear and understandable. The 2.0 mix on Galactica 1980, when played back in Pro-Logic mode, is very similar, but without any discrete effects in the surrounds.

All of the Special Features can be found on the Battlestar Galactica: The Complete Series discs.

Disc One:
Audio Commentary on Saga of a Star World (aka Pilot) with Actors Richard Hatch, Dirk Benedict, and Herbert Jefferson, Jr.: The three actors reminisce about shooting the pilot and working on the series.

Battlestar Galactica: Remastered (1080p; 5:44): Digital Mastering Supervisor Vishal Chathle and his team discuss the challenges and some of the steps taken to create new HD masters for the series.

Remembering Battlestar Galactica (480i; 44:58): Richard Hatch, Dirk Benedict, Herebert Jefferson, Jr, Anne Lockhart, Noah Hathaway, Glen A. Larson, and other members of the cast and crew reminisce over working on the series and its legacy.

Glen Larson on the Creation of Battlestar Galactica (480i; 5:47): As the title implies, Larson discusses the various aspects and mythology of the series.

Inside Battlestar Galactica: The Cylons (480i; 4:49): The cast and many of the series directors discuss working with the Cylons and the challenges they faced.

Stu Phillips: Composing the Score (480i; 5:02): The composer discusses writing the score, the various themes used in the pilot and series, and recording the score at Fox with the Los Angeles Philharmonic Orchestra.

Die hard fans who want the series in its original aspect ratio have no choice but to purchase the more expensive Definitive Collection, while casual fans or those on a budget may opt for the less expensive Remastered Collection. In a more perfect world, Universal would have released the Remastered Collection in both widescreen and full frame editions, as the full frame discs included in the Definitive Collection appear to be the versions released internationally (the tip off is the multi-language menu that appears just after inserting the disc and the mention of Universal International in the disclaimer screens rather than Universal Studios).


So, it would appear that, at least the 1980 episodes came from an entirely different set of masters than the 4:3 set. As for the 1978-79 episodes, though, perhaps you're right about them zooming in.

There is missing footage during the episode, THE MAGNIFICENT WARRIORS, on disc 3 of the widescreen version of BATTLESTAR GALACTICA on both the Remastered Collection and Definitive Collection. The issue is being fixed and consumers can get a replacement disc by emailing[email protected].

Consumers should include, "Battlestar Galactica Classic Collection: BD" in the subject line of their email and the following text in the body of the email, "I would like to receive a replacement disc for (Disc 3, Episode "The Magnificent Warriors")."