Considered a lost film until a dupe negative was discovered in France in 2014, the 1916 version of Sherlock Holmes offers scholars and fans of Sir Arthur Conan Doyle’s legendary detective a tantalizing glimpse at the actor who first made the sleuth famous on the stage, recreating (in pantomime, of course) his performance of the title role in the play which he himself penned with Doyle’s blessing. For its era, the film adheres to many of the tropes of its time, but the restoration of this ninety-nine year old film is pretty much a revelation, and even with Gillette’s alterations to the detective’s character and a lack of genuine mystery in the plotting, it’s wonderful to have this fabled film available now for all to see. 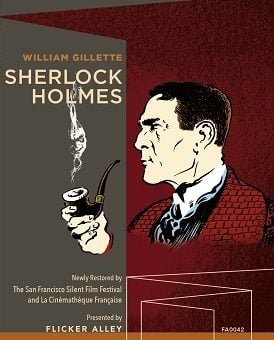 Coming into the possession of some love letters to her sister from the Crowned Prince whose indiscretions might cause a terrible scandal in international circles, Alice Faulkner (Marjorie Kay) flatly refuses to reveal the hiding place of the infamous missives to anyone. Under the pretext of friendship, nefarious couple James and Madge Larrabee (Mario Majeroni, Grace Reals) imprison the helpless Alice in their home until she’ll reveal the whereabouts of the letters, but when Sherlock Holmes (William Gillette) is called in to retrieve the letters, the proud and independent Alice refuses to give them up even to him. The Larrabees realize they’re no match for Sherlock Holmes and call in his arch enemy Professor Moriarty (Ernest Maupain) to get Holmes out of the picture. The professor’s first attempt on Holmes’ life is unsuccessful, but he’s got more tricks up his sleeve to trap his nemesis so there will be a clear path to getting those letters.

The scenario for the film by H. S. Sheldon has adapted William Gillette’s four-act play with the almost two-hour film also being divided into four episodes. Because Gillette was a major matinee idol of his day (on stage; he was sixty-two years old when he filmed this though he photographed very nicely), he wanted to give Holmes a love interest getting Conan Doyle’s unequivocal permission to do so (Doyle even gave him permission to kill Holmes if he wanted). So, Holmes’ purists will be perturbed by those plot strands as well as being a trifle dissatisfied that there is very little mystery to the movie (the secret location for the letters is revealed in the first episode) and a general lack of Holmes’ deductive reasoning on display after his first sequences. We do get a surprisingly dapper Holmes in the early going and later Gillette does don the deerstalker (but no Inverness cape), puff away on a pipe occasionally, and concoct an elaborate disguise to gain the upper hand. As for the staging, there is far less florid, melodramatic pantomime here than one might expect for a film from the same era as The Birth of a Nation and while director Arthur Berthelet films most of the story straight-on with a fairly static, unmoving camera and once in a while places an actor too near the edge who goes out of frame, there are occasional unusual camera angles that impress, and he stages the initial face-off between Holmes and Moriarty with a reasonable amount of tension.

Apart from Grace Reals as Mrs. Larrabee who does mug a bit and do some extreme gesturing, the actors are admirably restrained in playing this melodrama. In his first film, William Gillette as Holmes proves enormously appealing and in control, not overplaying with his body since he couldn’t give voice to his characterization. Edward Fielding is an amiable if somewhat bland Doctor Watson (whose shingle, it must be noted, mistakenly reads “G. Watson, MD” rather than “J.” since his name is John). Marjorie Kay gives a good account of an independent woman in 1916 as Alice though there isn't much chemistry with Gillette as his amour, and Ernest Maupain’s entertaining Professor Moriarty seems to be a cross between George Zucco who would later play the role in the Rathbone series and Werner Krauss who was Doctor Caligari. Two of Holmes’ assistants stand out with excellent performances: Stewart Robbins who plays Forman the butler planted in the Larrabee home as a Holmes spy and Burford Hampden as the delightfully scrappy pageboy Billy.

Framed at 1.33:1, it’s remarkable and rather amazing that any film from 1916 could look this good. The amber and cyan tinting used throughout certainly aids in disguising some of the nitrate damage, scratches, dirt, and dust specks, but the occasional small tear and lines on the left of frame that run for lengthy periods can’t help but be noticeable. Sharpness is quite good throughout (though there is more obvious damage and softness in the second half of the movie). Intertitles are available in French and English.

The DTS-HD Master Audio 5.1 sound mix features a terrific music score composed and performed by Neil Brand, Guenter Buchwald, and Frank Bockius that fits the action quite nicely and provides sprightly counterpoint to the dramatic, comedic, and romantic sequences in the movie and given nice spread through the fronts and rears.

From Lost to Found: Restoring William Gillette’s Sherlock Holmes (23:46, HD): Robert Byrne offers a film clip and slide presentation noting the history of the film and the restoration efforts utilized to bring it up to modern-day standards. This 2015 presentation was for the San Francisco Silent Film Festival.

Sherlock Holmes Baffled (0:47, HD): this 1900 clip is the earliest known film to feature the legendary character in a short where the sleuth matches wits with a magician.

A Canine Sherlock (15:05, HD): Sherlock in name only, this 1912 short features star canine Spot the Dog who ferrets out clues about a thief for his master.

Più forte che Sherlock Holmes (6:31, HD): Italian short from 1913 that finds an amusing dream sequence involving lots of pratfalls and camera tricks with one of the sleepers taking on the character of Holmes.

Sir Arthur Conan Doyle Interview (11:40, HD): this famous 1928 Movietone newsreel interview with the author finds him spending half the time discussing the influence of Sherlock Holmes on his life and the other half discussing his interest in psychic phenomena.

William Gillette Interview (5:50, HD): this 1930 Movietone newsreel finds the elderly actor proudly displaying his prowess as an engineer of his own private miniature railroad.

Lobby Card and Flyer Gallery (1:02, HD): ten items pertaining to the film are played in sequence.

Twenty-Page Booklet: outstanding booklet of photographs and essays on the film, its restoration, and its music penned by Russell Merritt, S.E. Dahlinger, Robert Byrne, Neil Brand, and Greg Wilsbacher.

DVD Copy: the film and its bonus features are contained on two DVDs enclosed in the case. The DVDs also contain a PDF typescript of the 1899 play Sherlock Holmes by William Gillette and a PDF of the original contract for Gillette’s services made with the Essanay Film Corporation.

Historically important and entertaining at the same time, the 1916 Sherlock Holmes has rejoined the land of the living looking sharper and cleaner than anyone should ever have a right to expect of a movie from this era. Kudos to La Cinematheque francaise and the San Francisco Silent Film Festival for doing the heavy lifting to bring this film back to the world. Recommended!

Excellent review. I recorded this from TCM but haven't watched it yet but the review has me interested in those extras so I'll pick up a copy.


I wish someone would come along and release a collection of the silent Holmes shorts. I've got a disc from Grapevine but would love to see more.

UHD Review A Few Words About A few words about...™ Snatch -- in 4k UHD Blu-ray