Charles Chaplin's melancholy meditation on aging all the while undergoing an unwanted twilight romance comes to Blu-ray via Criterion's new release of Limelight. As with much of latter day Chaplin, the film is overlong and has patches of inconsistent writing and indulgent sequences that could have been left on the cutting room floor. But, the heart of the film is lovely and memorable, there is one dream-team pairing with the legendary Buster Keaton which could have gone on a half an hour longer if excesses elsewhere had been cut, and Chaplin’s work as an actor and director is unquestionably fine. 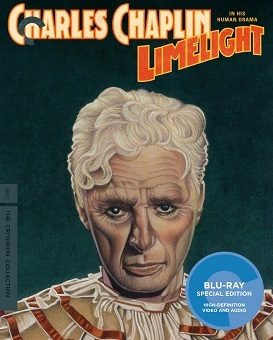 Suffering from hysterical psychosomatic symptoms which have left her lonely, depressed, and out of work, young ballerina Thereza (Claire Bloom) attempts to end her life but is saved by aged music hall clown Calvero (Charles Chaplin) who lives in the same boarding house. He sees for her a promising future and wills her back to life serving as her physical therapist and counselor until she’s strong enough to audition for the National Ballet where she impresses impresarios Postant (Nigel Bruce) and Bodalink (Norman Lloyd) and becomes their prima. During her convalescence, Thereza has fallen in love with Calvero, an attachment he attempts to downplay while he slowly builds up the courage to try for one final triumph on the stage.

Another unquestionable auteur work from Charles Chaplin (who wrote, produced, directed, starred, and scored the film as well as contributing to the choreography), having total control of the project meant that some ideas which weren’t very good were presented anyway. This includes allowing sloppy trifles like shadows on a rear projection backdrop and hiring actors who couldn’t mime playing instruments at all successfully to including a lengthy excerpt from the ballet Columbine which despite great dancing from Melissa Hayden standing in for Claire Bloom isn’t a good enough ballet to warrant such a lengthy sequence which brings the movie to a screeching halt. So does a second music hall remembrance from Chaplin where his clown sings “Spring Is Here” (an earlier flashback to a skit involving his trained fleas is worthy of inclusion). The script’s major weakness comes with the inconsistency in the characters' behaviors: while Thereza is down, Calvero gives her endless lectures and pep talks about life being worth living, but the moment his act goes bust, he’s near suicide and she must do the bucking up, and the lengthy film continues this see-saw exchange of depressions from one to the other to the bitter end. And it is a bitter film (Chaplin called it a “human drama” to emphasize that it was less comical than previous efforts) as Chaplin revisits downhearted moments from his father and mother’s past which have been woven into this fictional tale (and part of the grim emotions had to be personal with him, too, coming off his own first movie flop ever with Monsieur Verdoux). There is also a subplot involving composer Neville (Sydney Chaplin) who has fallen for Thereza but whom she discourages, a story that comes to the forefront frequently but has no real denouement. But even amid the considerable pain and disappointments there are moments of mirth capped, of course, by the deliriously funny climactic music hall encore sequence featuring clowns Chaplin and Keaton sharing the stage (though Chaplin has the funniest bits).

By the time the film was produced, Charles Chaplin had long since mastered the art of acting with his voice as well as his body, and this is one of his richest and most moving performances of his sound period. This was Claire Bloom’s movie debut, and she couldn’t have been in more experienced hands with Chaplin guiding her every gesture, vocal nuance, or flicker of the eye. It’s a very satisfactory debut in a very difficult role. Nigel Bruce is his usual charming self, less blustery and vacant than usual and all the more welcome. Chaplin’s son Sydney Chaplin has looks and ability as the thwarted love interest for Thereza, but he’s possibly a bit ill-at-ease in certain scenes being directed by his famous father. Norman Lloyd is fine in his producer role, and Marjorie Bennett as the bossy landlady has some rollicking good scenes, too. Andre Eglevsky and Melissa Hayden do dance divinely.

The film’s theatrical aspect ratio of 1.37:1 is faithfully rendered in this 1080p transfer using the AVC codec. Sharpness is outstanding in this transfer as details in facial features are especially notable in the many close-ups. The grayscale might not have the deepest black levels in existence, but they serve the purpose nicely and look sublime. Contrast has been consistently applied making for a very film-like image. The movie has been divided into 23 chapters.

The PCM 1.0 (1.1 Mbps) audio mix sounds better than one might expect for elements this old. There is a tiny bit of scratchy noise early on, and a bit of hiss during one of Chaplin’s songs also can be heard, but overall, the engineers have cleaned up this soundtrack nicely making sure dialogue is easy to hear and understand and that Chaplin’s Oscar-winning music score comes across with surprising fidelity.

Chaplin’s “Limelight”: Its Evolution and Intimacy (21:10, HD): a video essay by Chaplin biographer David Robinson details inspirations for Chaplin’s story and fills in career highlights between Chaplin’s resounding success with Modern Times in 1936 and the production of this film and his subsequent banishment from America.

Star Interviews (HD): Claire Bloom (15:53) reminisces about her early stage career and her surprise at being chosen by Chaplin for this part. Norman Lloyd (14:52) speaks about his friendship with Chaplin and his work in Hollywood at this time with heavyweights like Orson Welles, Fritz Lang, and Alfred Hitchcock as well as Chaplin.

Chaplin Today: Limelight (26:42, HD): a 2002 documentary on the film, featuring director Bernardo Bertolucci taking about his affection for the film and actors Claire Bloom and Sydney Chaplin speaking about working for the master.

Outtake (4:31, HD): a cut sequence described in David Robinson’s video essay above is shown in its entirety.

Chaplin Reads from Footlights (2:16, HD): Chaplin reads from his original novel which was then adapted into Limelight while stills and music play in the background.

The Professor (6:27, HD): an unfinished 1919 short in which Chaplin’s idea about trained fleas was first used.

Limelight is a memorable, moving meditation on fading youth and fame. It’s not a perfect film, but it’s an emotional one which Chaplin fans will likely be glad to have in such a generous package featuring an outstanding film transfer and a marvelous selection of bonus materials. Highly recommended!

Having watched this entirely a few hours ago, I agree with your video & audio remarks. It was as I viewed it. I must add, however, there was a sequence where Charlie & Claire are out and about and the restoration is such that the back projection is a little too obvious than usual. Nothing to bother me, though.
You must log in or register to reply here.