Kevin Carraway’s Chain of Command is one of the lesser made-for-home video action thrillers released of late. With narrative plotting full of holes and direction that occasionally veers toward the inept, Chain of Command rarely is able to rise above its inadequacies to capture the viewer’s attention in order to get involved in its plodding game of cat and mouse. 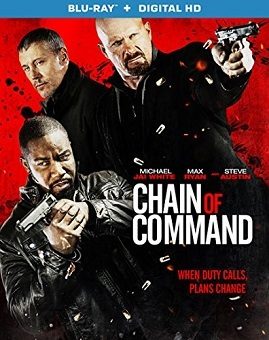 Returning from Afghanistan for a celebration party, military undercover operative James Webster (Michael Jai White) is shocked when his brother and his friend Cliff (Jon Osbeck) turn up dead. Though his brother had suggested he was in some sort of trouble, he hadn’t elaborated, and his wife Sally (Shyra Thomas) had been kept completely in the dark and knows nothing. Police lieutenant Ross (Max Ryan), a friend of James, promises to look more closely into the matter, but the only clue James can uncover is the name “Bill O’Brien” on his brother’s phone, a name that means nothing to James. As he continues to investigate with the help of his friend Sam Thorne (Ian Short), it’s clear that there are hitmen on his tail, and after dispatching several of them, James begins to piece together a drug smuggling operation and $40 million of missing money.

The script by director Kevin Carraway and Lawrence Sara expects the audience to overlook the fact that bodies drop constantly during James investigation (including several policemen) with little to no interference by the police, or that gunfights take place on streets and in neighborhoods with no one around to wonder what’s going on. Steve Austin plays a clean-up assassin brought in by the film’s mystery bad guy (no spoilers here though the film doesn’t keep his identity secret for very long spoiling one of its few chances for surprise) to finish the job if his men can’t take care of dispatching Webster. The writers also take a very long time to finally detail “Operation Echo” which explains all the body bags, quick kills, and millions of missing dollars which we get glimpses of during the film’s short (but seemingly endless) running time. Director Carraway doesn’t make either the fistfights or gunfights grow in intensity, falling back on the familiar trope of men taking multiple punches and chops to the head and body and bouncing back on their feet as if nothing had just happened, and in one very badly shot moment, a bad guy falling to the ground pushes the blue safety pad he’s fallen on up into camera range. Our hero takes a bullet to the shoulder in his final confrontation with the bad guys and seems at first in great pain, but a minute later, he’s fighting as if nothing at all has happened to his shoulder and has no trouble emerging victorious in a one-on-one fight with his nemesis.

As the film’s nominal hero, Michael Jai White doesn’t exude much intensity or fierce menace, but he certainly proves adept with his hands and feet in the film’s many fights (though one wonders if he has a license to kill since he ends quite a few people with shots to the head without incurring any police questioning or interference). Max Ryan seems to be hiding an accent from another country (Ireland perhaps?) only semi-successfully behind his American accent, but he is otherwise solid and reliable as Lieutenant Ross. Steve Austin is basically wasted in a thankless role of professional assassin kept on the sidelines for most of the movie only threatening to get involved if his boss’ men don’t start measuring up. Allen Yates is the public face behind the smuggling operation (though not its mastermind) trying to keep out of the limelight. Ian Short actually gives the most grounded performance as the one-eyed Sam Thorne whom James comes to depend on for help in his last face-off with the bad guys. Of the two primary women in the cast, Ashleigh Barnett makes a very unconvincing ace investigative reporter (she doesn’t seem very interested at all in helping potential boy friend James find the truth about his brother’s murder or snooping around about this multi-million dollar drug operation), but Shyra Thomas as the widowed Sally does what she can with a criminally underwritten role.

Shot digitally, the film is framed at 1.78:1 and is presented in 1080p using the AVC codec. Sharpness is consistently excellent throughout, and color values are strong and realistic. Black levels might not be the inkiest during the nighttime and darker interior sequences, but they more than pass muster. Contrast is also consistently maintained. The film has been divided into 16 chapters.

The DTS-HD Master Audio 5.1 sound mix makes Steven Yeaman’s background music score the primary inhabitant of the surround channels in the fronts and rears. There are some split atmospheric effects with vehicles panning through the soundstage and bullets during shootouts whizzing by, but the biggest action sequence in the movie seems to place the gunfire effects in the center channel rather than spreading them throughout. Dialogue has been well recorded and has been placed in the center channel. The most amusing aspect of the sound design is that James' gun evokes a cannon-like roar on the soundtrack while the bad guys' weapons sound more like popguns.

Unlike some of the very slick made-for-home video action thrillers mounted by the WWE for its wrestling superstars, Chain of Command is shackled with a less-than-thrilling script and paint-by-the-numbers direction. Fans of the action stars will likely be disappointed with this one though the Blu-ray presentation is certainly more than fine enough.