Buddy Holly's time in the limelight of Rock 'n' Roll was relatively brief, as his life was tragically cut short at the age of 23 when a small plane which he had charted crashed shortly after taking off near Clear Lake, Iowa on February 3, 1959. In spite of his short career, the geeky-looking, bespectacled Holly and his band, The Crickets, had a meteoric run of hit records, concert performances and television appearances in 1957 and 1958. The Buddy Holly Story, one of the cinema's finest musical biopics, was highly praised upon its release in 1978 and it has now been released by Twilight Time with a beautiful high-definition transfer courtesy of Sony. 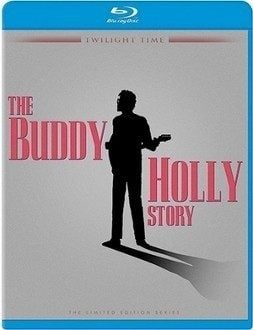 Friends, there is a new form of music - if you can call it music - that is as un-Christian and un-American as anything we have had to face in the past fifty years. - Buddy Holly's pastor in Lubbock, Texas, 1956On Saturday nights in Lubbock, Texas, singer Buddy Holly (Gary Busey) and his bandmates, drummer Jesse Charles (Don Stroud) and bassist Ray Bob Simmons (Charles Martin Smith), entertain the teenage skaters at a roller rink. The show is simulcast on a local radio station as "The Holly Hayride." This evening the band opens the show with a rendition of "Mockingbird Hill" that elicits a tepid response from the live audience. Buddy then decides that it is time to liven things up. He picks up his electric guitar and the group launches into "Rock Around With OIlie Vee," which Buddy announces is declares is "for the boppers." Predictably, the teenagers at the roller rink enthusiastically come to life and the adult champerones are scandalized (one woman covers her ears in horror).The next morning Buddy's pastor condemns what happened at the roller rink, but the young singer is unfazed. Both his family and his girlfriend believe that Buddy's interest in music is just a phase which will pass and that he will eventually go to college. Little do they know that a music executive from Nashville happened to hear the radio broadcast, and he invites Buddy and his group to come to Music City to make some records. However, when the record company's producer insists that they turn Buddy’s song "That'll Be the Day" into a "hillbilly" tune, Buddy explodes and he and his friends return to Lubbock. Buddy then gets the surprising good news that a tape of the roller rink performance was sent to Coral Records in New York, where it has impressed executive Ross Turner (Conrad Janis). It later turns out that one of the producers at Coral thought that Buddy and his group (now known as The Crickets) had already been signed to a contract, and records of "That'll Be the Day" were prematurely pressed and distributed. Buddy learns about this when a disc jockey from Buffalo, N.Y. calls him to say that he has been playing the record non-stop and that it is a huge hit.Perhaps the most memorable scene in the film is when Buddy and The Crickets are inadvertently booked to play at the Apollo Theater in Harlem. The booker had heard their music and mistakenly assumed that they were a black group. When the boys go onstage they are greeted with skepticism by the apparently all-black audience, but the infectious music leads to raucous applause and dancing in the aisles. The scene is based upon a true incident, but in reality the audience was somewhat slow to warm up to Buddy and The Crickets before eventually being won over. A similar incident occurred a year later when guitarist Duane Eddy and his group played the Apollo. After playing a couple of his hit tunes and being greeted with indifference, Eddy scrapped the rehearsed set and played a spirited and well-received version of a song called "Three-Thirty Blues" (an instrumental which The Beatles later played regularly during their time in Hamburg, Germany).It is worth noting that The Buddy Holly Story is not a documentary. For one thing, the names of The Crickets are wrong. Buddy's real drummer was Jerry Allison and his bassist was Joe B. Mauldin. Their names could not be used in the film because they had sold the rights to their likenesses to 20th Century Fox for a film about Holly's life which was never made. Ironically, Gary Busey was slated to play Jerry Allison in that film. Although The Buddy Holly Story shows Buddy singing with only two backup musicians, the real Crickets also had a rhythm guitarist, Niki Sullivan, whose character was omitted from the screenplay. Norman Petty, who owned the studio in Clovis, New Mexico where Buddy and The Crickets made most of their records, is never mentioned. Likewise, the film never explores the fact that Holly, like most musicians of that era, experienced problems collecting his full royalties for his records. But those are minor quibbles.Regardless of its occasional historical inaccuracies, The Buddy Holly Story superbly captures the spirit of Holly's life and times. Much of the credit for that goes to the Academy-Award nominated performance by Gary Busey, who does his own singing and plays Holly with dynamic and charismatic gusto. As film historian Julie Kirgo points out, it is now difficult to imagine any other actor in that role. Don Stroud and Charles Martin Smith add to the film’s feeling of authenticity by playing their own instruments. Director Steve Rash also deserves credit for keeping the story moving along with very few lullsThe influence which Buddy Holly had on popular music in general, and Rock 'n' Roll in particular, cannot be overstated. It has been reported that a European Blu-ray release of The Buddy Holly Story is rather dreadful. Fans of the film need not worry about being disappointed by this Twilight Time release, which lives up to the company's always exemplary standards.

The 1080p 1.85:1 high-definition picture is outstanding in every respect. This transfer is flawless, as evidenced by the comments from our resident expert, Robert A. Harris. Please take a minute to read what he has to say.A few words about...™ The Buddy Holly Story -- in Blu-ray

The English 5.1 DTS-HD MA soundtrack is equal to the superb video presentation. Every word of dialogue is clear and understandable, and Buddy Holly's music comes alive during the many musical performances throughout the film. Joe Renzetti deservedly won an Academy Award for his outstanding adaptation of the music.

The extras on this Blu-ray disc include the original theatrical trailer, which is in excellent shape, and the isolated score track, which Buddy Holly fans will enjoy listening to again and again.Also included is a commentary track by Gary Busey and Steve Rash, which I believe has been ported over from the earlier DVD release.Included with the disc is an eight-page illustrated booklet which contains an entertaining and informative essay by Julie Kirgo. She writes "On their tight little budget, the filmmakers managed the extraordinary, recording every musical number live for camera within just a few exhausting, exhilarating days - and, marvelously, it shows." Indeed it does.

I was dazzled when I first saw The Buddy Holly Story in a theater in 1978, and I have just been dazzled again. Anyone who cares about the early days of Rock 'n' Roll will want to see this Blu-ray release. For anyone who does not particularly care about those days, give it a try and you are likely to change your mind. As an added bonus, Twilight Time is scheduled to release the perfect companion film, La Bamba, on Blu-ray next month.This Blu-ray disc is being released as a limited edition of 3,000 units, so readers who are interested in purchasing it should go to the Screen Archives website and verify that copies are still available.

Who owns the rights of this movie and any chance it will get a new release ?

Sa5150 said:
Who owns the rights of this movie and any chance it will get a new release ?
Click to expand... Sony has been releasing SOME of the films that sold out from Twilight Time. They could also lease it to Mill Creek as it is often paired with La Bamba.

It’s hard to believe the first comment on this review occurred 6 years later. Well written and I learned things new about the movie.

A wonderful movie. I especially love the Apollo Theatre sequence. I hope it becomes available for all those who missed the chance to get the Twilight edition.
You must log in or register to reply here.