Everyone knows that rock 'n' roll stars Ritchie Valens and Buddy Holly (along with "The Big Bopper," J.P. Richardson) died in an airplane crash near Clear Lake, Iowa on February 3, 1959. Their paths to fame were sufficiently different that Holly and Valens each became the subject of a successful rock 'n' roll biopic. In August Twilight Time released a stellar Blu-ray version of The Buddy Holly Story, and that achievement has been matched with an outstanding Blu-ray release of the perfect companion film, La Bamba. 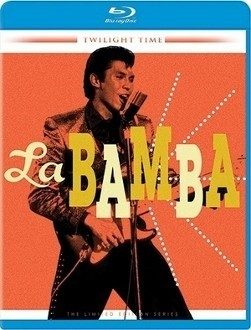 La Bamba opens on a farm in northern California in 1957, where 16-year-old Richie Valenzuela (Lou Diamond Phillips) and his family are eking out a living picking fruit. Richie awakens from a nightmare about the mid-air collision of two airplanes which occurred one day over his school. The daily routine of Richie and his mother, Connie (Rosana De Soto) is upended with the arrival of Richie's older half-brother, Bobby Morales (Esai Morales). The migrant workers live in a town of tents, and everything comes to a stop when he drives up wearing a leather jacket and riding a motorcycle. Bobby had been in prison, but he hadn't bothered to visit his family upon his release. He apparently decided that he wanted to make some money first, and he shows up with a bankroll and announces "We're getting out this shithole tomorrow." That evening Bobby makes a successful play for Richie's girlfriend, Rosie (Elizabeth Peña), and the next morning Rosie hops onto the back of Bobby's motorcycle when the family drives south to the Los Angeles area.Several months later the family has settled down in the San Fernando Valley, where Richie focuses on his true love, music. One day at school he meets a new student, Donna Ludwig (Danielle von Zerneck), and immediately falls for her. Problems with their relationship arise because Donna's father does not approve of her dating the Hispanic teenager (although Richie's heritage is Mexican-American, he was born in California and does not speak Spanish). Word of Richie's singing ability and his proficiency with the guitar gets out and he lands a position with a local band, The Silhouettes. Connie pays to rent an American Legion hall for a night so the Silhouettes can perform there, but the leader of the band nixes the idea. Richie and the rest of the band decide to go on without him. During the performance Richie impresses Bob Keane (Joe Pantoliano), an independent record producer who has started his own label, Del-Fi Records. Keane signs Richie to a contract and persuades him to change his stage name from Richie Valenzuela to Ritchie Valens.In the meantime, Bobby is causing trouble at home. Rosie has become pregnant and Bobby, who drinks too much, spends little time with her. He also is jealous of all the attention which Ritchie is getting. Donna's father refuses to let her go out with Ritchie, or even talk to him on the phone, so Ritchie responds by writing a plaintive ballad, called simply "Donna," which was to become one of his signature recordings. Bobby decides that Ritchie is in a funk and needs some female action, so he takes him to an upscale whorehouse in Tijuana. However, Ritchie is distracted when he hears the house band (in real life, Los Lobos) sing the Mexican folk tune "La Bamba."Ritchie has already recorded his first hit record, a self-penned tune called "Come On, Let's Go," and now he is in the studio to record "Donna." Once that is on tape, Keane points out the record will need a "B" side, and Ritchie suggests that he record "La Bamba." Keane is against it, saying "It's not rock 'n' roll." Ritchie responds, "It is the way I play it." Keane believes that rock 'n' roll in Spanish will never work, but Ritchie prevails and the rest, as they say, is history.Lou Diamond Phillips, seen here in his first lead film role, is immensely appealing and energetic as Ritchie, and Esai Morales exhibits great charisma as his troubled and troublesome brother. Elizabeth Peña is sympathetic as the mistreated Rosie, who is alternately abused and ignored by Bobby. Rosana De Soto is sweet and appealing as the mother of Ritchie and Bobby, and Joe Pantoliano, who often plays creeps (think of him in the role of Ralphie in The Sopranos) is very effective here as nice guy Bob Keane. The weak link in the cast is Danielle von Zerneck's portrayal of Donna. There is very little chemistry between her and Lou Diamond Phillips, and it is never quite clear why Ritchie is so taken with her. Ritchie's fear of flying, which dates back to that mid-air collision over his school, is brought up more often than necessary. Those are minor caveats, however. Under the able supervision of writer-director Luis Valdez (Zoot Suit) the film is well-paced and full of intensity. Valdez undoubtedly drew upon his own experiences as a migrant worker to create the vivid opening scenes. The music, most of which is performed by Los Lobos and lip-synched extremely well by Lou Diamond Phillips, is excellent throughout. Music aficionados will note that Brian Setzer plays Eddie Cochran and Howard Huntsberry plays Jackie Wilson during an Alan Freed concert in New York City, and Marshall Crenshaw portrays Buddy Holly in Clear Lake, Iowa. A trivia note: Valens and Huntsberry both were born in Pacoima, California, eleven years apart.The big difference between Ritchie Valens and Buddy Holly is that Valens' career was more meteoric and far briefer. Holly had been making Top 40 hits, both as an artist and as a producer, for 18 months by the time of that fateful night in Iowa. "Donna," Valens' first Top 40 hit, had been in the Top 40 for only six weeks when he died, at which time he was only 17 years old. Those of us who have enjoyed their music can only wonder about what great sounds they might have produced had they lived.

It should come as no surprise that Sony has provided Twilight Time with another first-class Blu-ray transfer. The 1.85:1 1080p video is encoded with the AVC codec and looks terrific. The picture is very sharp and exhibits great detail. Colors are vivid and accurate, contrast is strong, and blacks are excellent. The level of film grain is appropriate and this Blu-ray has a thoroughly satisfying and film-like appearance.

From the opening bars of Santo & Johnny's "Sleep Walk" it is apparent that viewers are in for an audio treat. The English 5.1 DTS HD-MA sound is terrific. Dialogue is clear and understandable and the musical sequences are given a wide and exceptionally pleasing soundstage.English SDH and Spanish subtitles are available.

The extras on this Blu-ray release of La Bamba include the original theatrical trailer and two commentary tracks. The first commentary track features Lou Diamond Phillips, Esai Morales, Luis Valdez, and producer Stuart Benjamin. The second commentary track features producers Taylor Hackford and Daniel Valdez.The isolated score track is a treat.An illustrated eight-page booklet contains a typically informative and insightful essay by Julie Kirgo. One thing which I did not know is that Columbia Pictures released dozens of Spanish-dubbed and Spanish-subtitled prints of La Bamba around the United States at the same time that the English version was released.

La Bamba is one of Hollywood's better musical-themed biopics. Historically it is mostly accurate - Ritchie Valens really did write "Donna" for his high school sweetheart, and there really was a mid-air collision over his school which left him with a fear of flying. An outstanding cast and exceptional music help to earn this Blu-ray disc a high recommendation.La Bamba has been released in a limited edition of 3,000 units, so readers who are interested in purchasing it should go to the Screen Archives website and confirm that copies are still available.

I first heard of Santo & Johnny's Sleep Walk because of this film. I always think of that song as a perfect anthem for any unfortunate individual who died way way too young, not just Ritchie Valens, but in general.

This is such a good movie, and so is the Buddy Holly Story, it's just too bad that this is limited to 3000 copies.

Oliver Ravencrest said:
This is such a good movie, and so is the Buddy Holly Story, it's just too bad that this is limited to 3000 copies.
Click to expand...

That's why I got both!
B

Awesome post. Was wondering when this would be released. In part I wish this wasn't limited. Good movie. I'll definitely think of grabbing this. I have bought from them too.

Sad news as Elizabeth Pena just passed away at the age of 55.

Very sad. I had recently watched this disc. She was a very talented lady. RIP.
B

Yeah, a talented & great actress. From La Bamba, Tortilla Soup, Rush Hour to The Incredibles and recently Modern Family. Gosh, she wasn't old either. Gone too soon.
You must log in or register to reply here.