Destined to become another Halloween perennial like It’s the Great Pumpkin, Charlie Brown, Pixar’s Toy Story of Terror! is a delightful romp with many of the beloved Toy Story characters and a few new faces along for a scary and exhilarating ride. What’s more, because the story isn’t fixed on Halloween but rather on creepy doings in a shuddery motel, it could actually be shown at any time of year. It’s another winner filled with the humor and heart-thumping adventure which certainly distinguished the three Toy Story features. 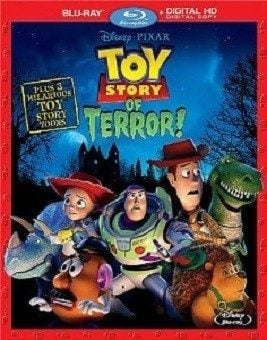 keep case with a slipcover

When little Bonnie (Emily Hahn) and her mom (Lori Alan) have a blowout on the highway and pull into a motel for the night, many of Bonnie’s toys brought along on the trip leave the luggage once their two owners are asleep and get pulled into a mysterious and somewhat frightening adventure where first Mr. Potato Head (Don Rickles) goes missing (except for his arm), and then one-by-one, the other familiar characters are carried away by an unknown entity. Only Jessie (Joan Cusack) is left, and she’s suddenly scooped up by a toy action figure Combat Carl (Carl Weathers) who cautions her that she’ll have to find resilience within herself if she’s to survive the night and find out what has happened to her pals.Director Angus MacLane has written a first-rate script which trades on familiar tropes of the horror and mystery genres (especially for the first half of this special) before the screenplay morphs into one of the expected Toy Story survival adventure tales by the second half of the narrative, and the Pixar team has designed and executed some truly frightening moments in the early going with eerie low lighting and later spooky green light which aids immeasurably in the mood of fright and the kind of creeping terror used in horror films for decades. One of the special’s real inspirations is allowing acting expert Mr. Pricklepants (Timothy Dalton) to provide for the audience in the first part (before he gets swept away) running commentary on how their dilemma parallels events in a typical fright feature (the special even begins with the gang watching a cheesy vampire film while he provides expert analysis of the events as they occur). The Pixar animators as usual have comic timing down to a science (don’t turn off the special at the first sign of credits; there are hilarious things to come), and they’ve worked in new characters (besides Carl, there is Kate McKinnon’s PEZ Cat, Peter Sohn’s transformer Transitron, some Legos, and an ancient clock called Old Timer) so that they feel like part of the gang in a very brief amount of time. Hopefully, it’s not the last we’ve seen of them as they’re very entertaining).Most of the usual Toy Story voices are here: Tom Hanks as Woody, Tim Allen as Buzz, Wallace Shawn as Rex, Kristen Schaal as Trixie (in addition to the others already named), and they’re as wonderful as ever. Carl Weathers is terrific as the gung-ho Carl with the CGI animation software so versatile now that he seems strikingly real. Stephen Tobolowsky as the motel manager is likewise effective in a role more substantial than it first appears. Joan Cusack’s Jessie and Timothy Dalton’s Mr. Pricklepants have more to do this time out than is usual in the features and shorts, and it’s great to see them more in the limelight.

Behind The Scenes of Toy Story OF TERROR!

The special has been framed at 1.78:1 and is presented in 1080p using the AVC codec. Sharpness is expectantly brilliant throughout, and color is controlled to beautiful and intricate perfection. Contrast is adjusted so that low light levels are expectedly murky and other locations out of the shadows are bright and clear. There is no banding or any kind of artifact to spoil the reference quality video of this release. The presentation has been divided into 10 chapters.

The DTS-HD Master Audio 7.1 is one of the most sophisticated sound designs for a television special ever done. Every one of those front and rear speakers gets used individually with voices bouncing around and split sound effects popping and echoing at any given moment. Oscar and Emmy winner Michael Giacchino’s score channeled through the soundstage provides lively accompaniment to the scary, tense, and funny moments in the script. Dialogue is always clear and is mostly in the center channel except when directionalized dialogue suits the needs of the story.

Another wonderfully entertaining and infinitely repeatable Pixar production, Toy Story of Terror! is simply a joy from beginning to end. Highly recommended!

As I mentioned in some other thread, it is hard-to-believe...but I completely missed this when it aired on broadcast television (how inappropriate given my avatar???)

After reading Matt's review, I can't believe I have to wait yet another week before checking this out. It sounds like a totally professional, high-quality piece of work for a seasonal TV special. What is the running length, Matt? About a half-hour?

It is SO NICE that they haven't dumbed-down the Toy Story gang as they continue to churn out Toy Story product.

I remember how incredibly nervous I was that Toy Story 2 was going to be the worst thing to ever happen to the franchise (I'm sure those concerns are documented here on this forum in an archive somewhere!) and it turned out to be arguably better than the original film. And this was at a time when Disney was spitting out some of the worst-conceived sequels ever in cinematic history.

It makes sense to keep the standard high for the flagship franchise...but how tempting it must be to just throw crap out there on the cheap and rake in profit. They can continue to take my money (given gladly by me) as long as they put together original stories and maintain such a high-level of output and pay the expense to bring back the original voice actors, too.

Very much looking forward to having this delivered next week...

Mike Frezon said:
As I mentioned in some other thread, it is hard-to-believe...but I completely missed this when it aired on broadcast television (how inappropriate given my avatar???)
Click to expand...

There's a Christmas special this year. It's called Toy Story That Time Forgot and it's on December 2 at 8 PM so mark your calendar!

Mike, the program length is in the stats at the top of the review - 22 minutes.

This was a review I had to traverse very carefully because I wanted to give a taste of the show without revealing any of the surprises for those, like you, who haven't seen it yet. There is so much more I could have talked about (and praised), but I had to rein it in to prevent any kind of revelations.

You realize, of course, Matt, that I definitely looked at the top stats that you always include in your reviews--BEFORE I asked that question.

But, just as obvious, I didn't see it sitting there so plainly and needed to ask just to make myself look dumb!

And, I kid you not, I almost wrote as an addendum to the 30 minute question: --like maybe about 22 minutes?

That would've been even dumber!

Thanks for the great review. You certainly whetted my appetite.

Thanks Matt, let me know what you think Mike, we really enjoyed it. The three Toy Story shorts are almost worth the price of admission. I added some fun video clips to the review.

Adam Gregorich said:
Thanks Matt, let me know what you think Mike, we really enjoyed it. The three Toy Story shorts are almost worth the price of admission. I added some fun video clips to the review.
Click to expand...

I'm linking to this review from my upcoming SVS Prime review, as it was an inspiration. I agree with Adam here on the quality of the shorts, Partysaurus Rex needs it's own review, it is wayyyyyy better than the main feature! =)
You must log in or register to reply here.