I think streaming a prestigious film like Bond would cause an existential threat to cinemas. By releasing Tenet theatrically in the most difficult of circumstances, Nolan has given the industry a huge vote of confidence in its hour of need. Use them or lose them.

Keith Cobby said:
I think streaming a prestigious film like Bond would cause an existential threat to cinemas. By releasing Tenet theatrically in the most difficult of circumstances, Nolan has given the industry a huge vote of confidence in its hour of need. Use them or lose them.
Click to expand...

I agree that's Nolan's intent but I think the problem is that the studios are going to see how much money that Tenet loses and either move their tent pole movies or they'll tell the theaters that they'll release a movie in the theater but they'll also be going the PVOD route a couple weeks after the theatrical release. Fortunately, MGM has no other franchises to force that with theaters so No Time To Die will likely be going only to theaters... at some point in time.

Jeff Adkins said:
Bond is MGM's cash cow. I don't see any scenario where they're going to want to take a bath by dumping it onto PVOD. I could see a delay happening (although that's looking less and less likely), but I don't see any way that this doesn't open in theaters.
Click to expand...

That's my thought as well. This film had a bloated budget of 250 million dollars. Seems like a tall task to make a good ROI when they're skipping a theatrical run, but better minds than mine will figure that out.

For my preferences, nothing beats the experience of seeing a movie in the theater for the first viewing. From that standpoint, I really hope that NTD doesn't get delayed again or made available on demand instead.

Worth said:
That's less of an incentive when you already have over $100 million.
Click to expand...

Does that mean that professional athletes no longer give full effort after signing contracts of similar value (i.e. there is less incentive)?

It's really an unimportant thing to debate about but just to throw my .02¢ in...

I disagree that anybody has less incentive to make money if they had already made $100mil.

First of all we can never know what their finances are. I can draw up a list a mile long of famous people who have died broke for a myriad of reasons. Making it does not mean still has it.

Second, what if the man is filthy rich but has decided to donate his paychecks to charity? For a direct example Sean Connery came back to do Diamonds are Forever just so he could donate his entire $5mil salary to start an education trust in Scotland. If that's the case, hold out for as much as you can, I say...

An alternate international trailer with some new footage...

Tom-G said:
Does that mean that professional athletes no longer give full effort after signing contracts of similar value (i.e. there is less incentive)?
Click to expand...

If their motivation is purely financial, it might be. My point is just that if you already have between $120-160 million, as Craig is reported to have (and who knows whether that's true or not), an additional $25 million is not going to change your life in any meaningful way. And if he really were sick of playing Bond, it might not have been enough of an incentive to lure him back.

Worth said:
If their motivation is purely financial, it might be. My point is just that if you already have between $120-160 million, as Craig is reported to have (and who knows whether that's true or not), an additional $25 million is not going to change your life in any meaningful way. And if he really were sick of playing Bond, it might not have been enough of an incentive to lure him back.
Click to expand...

Yeah, I think 100% that his initial reason to do his 5th Bond was that it was something he saw worth doing creatively. On top of that, I’m sure he expected and got a huge payday for it, but that doesn’t mean he’d have taken a payday to do a crap movie he didn’t believe in, at least in the case of Bond.

And since I’m sure someone will be bringing it up, I know he made those “slit my wrists” comments 5 years ago, which doing something just for the money came up, but everyone seemed to forget or ignore the full context of what he was really meaning. He had just finished filming Spectre and really needed some time before even thinking about doing another one. He was obviously in a sour mood and burned out from filming. It would be like finally getting to your time off from work you’ve been looking forward to all year, and while walking out the door at work, someone stopping you and say “So what are your big plans for when your vacation is over?” Personally, I’d tell them to f*** off.

Jeff Adkins said:
Bond is MGM's cash cow. I don't see any scenario where they're going to want to take a bath by dumping it onto PVOD. I could see a delay happening (although that's looking less and less likely), but I don't see any way that this doesn't open in theaters.
Click to expand...

I think it depends on how desperate they are for cash. If they can afford to hold it, they should. Remember, No Time to Die was the first movie to be delayed due to the virus, before we even knew that theaters in the United States were going to have to close. I think, at the time that the delay to November was originally announced, China was the only market that was closed yet. They clearly want the box office to be at full strength when this opens. As I indicated before, I really want them to delay it so that I can feel safe going to see it.

However, if they decide they need a cash infusion right away, then I think all options are on the table.

Universal got $100 million (at minimum) for their PVOD release of Trolls, of which they got to keep a much higher percentage than they would have if the film had grossed the same amount theatrically.

I don’t think MGM is dreaming of PVOD revenue. I don’t think it’s what they want to do. But I certainly see a pathway to that being an option depending on how the country is looking and how the world is looking in another month.

Colleges have just started reopening and those locations have experienced huge surges in virus cases. Grade school is about to reopen. We could somehow get very lucky and not have further problems. Or we could be in a situation as bad or worse than the spring. I don’t think anyone can truly say right now which it’ll be. If Tenet tanks and if new outbreaks take the holiday moviegoing season off the board, I don’t think it will be as simple as postponing everything another year. I think product will need to come out. They can’t keep all of their liquidity tied up indefinitely in product that can’t be released. Even a modest gross and a tax write off for the difference between what they expected and what they get may prove more valuable than indefinite waiting.

Spectre just wasn't as good as Skyfall, and therefore its grosses were less. I saw Skyfall twice theatrically but only saw Spectre once.

Because No Time to Die is the conclusion of Craig's Bond, I think it's very possible that it could resonate in a more significant way and behave more along the lines of Skyfall than the others. But in order for that to happen, the movie would have to be spectacular, and it would have to be held until after the pandemic is over when the box office is back at normal strength. But that would be a long hold, and they might not be able to sustain holding it that long.

It is MGM's only big franchise, which cuts both ways. Holding it would result in more money in the end when it finally does come out, but if they hold it that long, they won't have money coming in from other films to sustain them in the meantime. So as I said before, I think it comes down to how much they need the money at the present time and if they think releasing it now will make them enough to justify putting it out.

Skyfall’s gross was above average not because of the quality of the film, but because of the massive additional push the film was given in celebration of the franchise’s 50th anniversary. That was a great hook which lifted the grosses worldwide.

That was probably a contributing factor, but I think many people regarded the film as the best of Craig's Bond films by a lot, and that helped spur word of mouth. I know I do.

I don’t disagree that the film was well liked, but I don’t think that’s enough to account for how far and above it’s grosses were relative to other entries in the series.

MGM’s No Time to Die is officially heading to April 2, Easter weekend, and vacating its November 20 release date. Interestingly enough, this puts the James Bond film starring Daniel Craig on …

Not at all surprised by this announcement.

Good for them. It's the right thing to do.

I would have thought they would have delayed sooner, like before they released another trailer and poster image. It got my hopes up that it would have stayed in November. Oh well...

I suspect they came to this decision recently. Cutting a new trailer is an expense they don't need if they're not going to release the film. I don't think it was really, "Let's cut a trailer and then delay it."


Deadline said:
The decision comes at a time when the pandemic has gripped, not only New York City theaters (which it’s still unclear when they reopen), and Los Angeles (which could get the go-head to open in a couple of weeks), but also the United Kingdom, a prime 007 market that traditionally opens prior to domestic and grossed $125M on the last film Spectre and over $161M on 2012’s Skyfall. UK faces a possible lockdown, and that’s bad for Bond. This despite the fact that business is back to normal at the China box office.
Click to expand...

I think that bit in there about the UK is critical. Although popular in other countries, this is a very British series, and the UK is always a big market for Bond films. If they can't open there due to another lockdown, there's not really much point in going anywhere else either and giving an opportunity for people in the UK to pirate it.

In other news, The Fast and the Furious 9, or whatever they are calling it now, has vacated the April 2 date to make room for Bond. That one will now go May 28, 2021. Universal is handling overseas distribution of Bond and of course has F&F worldwide, so this is a strategic move on their part because they have an interest in both properties.
Last edited: Oct 2, 2020

Daniel Craig addressed the delay when talking to Jimmy Fallon: 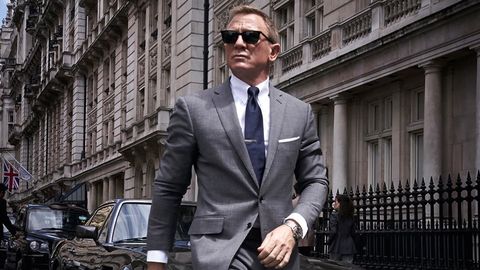 deadline.com
You must log in or register to reply here.

What happened with the studio bidding war for Bond 25?