Sam Favate said:
Ruby Rose has quit the show! Batwoman will be recast! Batwoman just ended its first season on The CW and now, the Arrowverse series is looking for a new [...]

That's crazy! I hope they have a new character take up the mantle rather than have a new actress play Kate Kane. It just pulls me out of the story too much when such a major character is recast.

Warner Bros. Television, The CW and Berlanti Productions thank Ruby for her contributions to the success of our first season and wish her all the best,” the two companies said. “The studio and network are firmly committed to Batwoman’s second season and long-term future, and we — along with the show’s talented creative team — look forward to sharing its new direction, including the casting of a new lead actress and member of the LGBTQ community, in the coming months.”
Click to expand...

So, we don't know yet just whether it is Katy Kane or Batwoman changing.

I don't watch this show, but even so I was sad to hear this news. It's Ruby Rose's decision to make, and no one should make her do something she doesn't want to do. However, I remember some internet trolls bashing her rather loudly when she was originally announced for the role last year. Her departure will probably have the unfortunate side effect of convincing those people that they "won," which is a bad thing for internet culture in general.

I didn’t like the show.
Watched up until Crisis and continued to record.
Deleted everything off the dvr last week.

Don’t care for her as Ana actress and she was especially stiff on this show.

The Alice stuff was beat to death and apparently still is a main plot point on the show.

Also...this clue from today's episode of Jeopardy! has just been floating around Twitter. Obviously, the episode was taped several weeks ago prior to the pandemic, but the timing now becomes a little awkward/ironic: 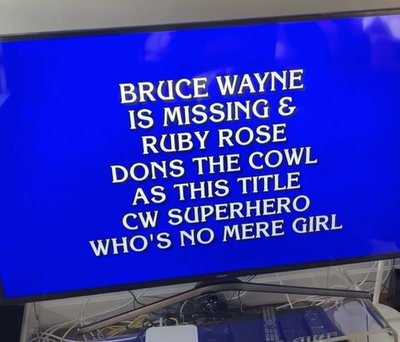 let Rachel Skarsten play both roles! She's fantastic as Alice give her a shot

Here is more from TVline about Ruby Rose's departure being a mutual decision between her and the production company. She wanted off the show and probably became unpleasant to work with so producers decided it would be in everyone's best interest to make the change.

I read that she was injured on the show and that's why she left.

TonyD said:
The Alice stuff was beat to death
Click to expand...

Couldn't agree more, Good Lord, doesn't Batwoman have ANY other foes? I'd like to see them do something with Hush, retire Alice already!

As far as recasting Batwoman, why doesn't Julia Pennyworth assume the identity?

A new character will play Batwoman per this Hollywood Reporter article.

NeilO said:
A new character will play Batwoman per this Hollywood Reporter article.
Click to expand...

One one hand, that was what I had advocated for, since I hate recasting. On the other hand, replacing the central character is even trickier on this show than most, because with the exception of Luke Fox, every character is tied personally to Kate Kane -- including the Big Bad for the first season. The CW’s Batwoman will have a new lead next season following the exit of star Ruby Rose. In a conversation with fellow showrunner Julie Plec as part of ATX TV…from the Couch virtual festival, Batwo…

Sam Favate said:
Wow, that’s big, isn’t it? Hasn’t Katy Kane been around since the ‘50s?
Click to expand...

Batwoman was originally created in the 50s but was phased out in the 60s. She made a few appearances here and there, but was largely a footnote in the history of Batman for decades.

The version of Batwoman that the show is heavily based on was introduced in 2006. I think this is the wrong call. They should recast. Too much of the fabric of this show is strongly woven into Kate’s character. The idea of someone else just stepping in and forcing new relevance around her while just dropping all the other stuff tied to Kate is far more off putting than a recast. These are actors playing make believe. People can handle a recast.

Adam Lenhardt said:
One one hand, that was what I had advocated for, since I hate recasting. On the other hand, replacing the central character is even trickier on this show than most, because with the exception of Luke Fox, every character is tied personally to Kate Kane -- including the Big Bad for the first season.

New interesting interview on this.

Just because Batwoman plans on introducing a brand new character to pick up the titular hero's mantle in the wake of Ruby Rose's exit doesn't mean the CW superhero drama will forget about Kate Kane. In fact, Kate's absence will baked into the show's second season in the same way that Bruce Wayne's was in the first season. .... Like you, I love Kate Kane – she’s the reason I wanted to do the show. We’ll never erase her. In fact, her disappearance will be one of the mysteries of season two.
Click to expand... The CW's Batwoman has cast God Friended Me alum Javicia Leslie as Ryan Wilder, the woman who will become the Scarlet Knight in Season 2.

Not thrilled with this casting. She was probably the weakest actor on "God Friended Me".
You must log in or register to reply here.