The second season of the newest adventures of Superman (and family) will premiere at mid-season on the CW.

When we last left the Kent farm:
Casting news: BTS photo of Clark and Lois. Looking forward to the return of this series.

Does Superman owe his allegiance to the USA or the world is a theme for Season 2. 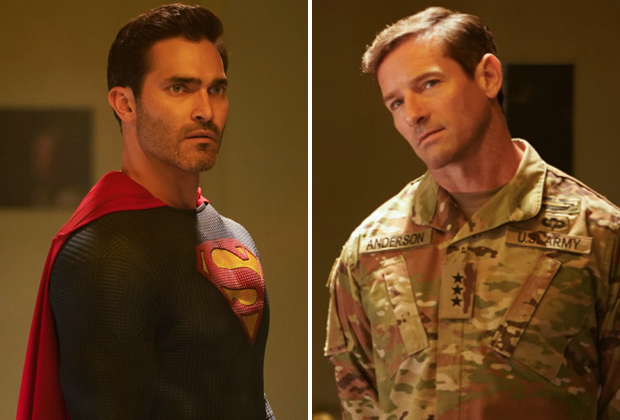 Whose hero is he, anyway? That’s one of several key questions broached in Tuesday’s season premiere of Superman & Lois (The CW, 8/7c)


Garysb said:
Does Superman owe his allegiance to the USA or the world is a theme for Season 2.

Whose hero is he, anyway? That’s one of several key questions broached in Tuesday’s season premiere of Superman & Lois (The CW, 8/7c)

The change of Superman's official slogan from "Trust, Justice, and the American Way" to "Trust Justice, and a Better Tomorrow" has been controversial, to say the least, but this show does a better job of most depictions of the character in really engaging with that slogan.

The show's Clark Kent is a proud Kansan who loved growing up in rural small town America. His unwillingness for Superman to be identified as American isn't a rejection of America. Instead, it's an understanding that -- as one of the most powerful beings on the planet -- he can't be seen as an agent of any one nation. To commit in such a way would convince the other powerful nations of the world that they need their own super being, and the superhuman arms race is not likely to end well.

Here is a link to an unpublished Superman Comic written in 1940 where Lois found out Clark was Superman. When DC decided to keep Lois in the dark the story was scraped. Some original art work was discovered and restored, the majority is a modern recreation in the style of the time. This story also has the earliest introduction of Kryptonite, ahead of its introduction on the radio show to give Bud Collyer, the radio voice of Superman, time off.

Good to have this one back.

The nice thing about the three month time jump is that it allowed the characters a period of normalcy. Smallville's settling back down again, even benefiting from the tourism that has resulted from last season's climactic battle, and Superman's well-publicized role in it. The stakes, when we pick things up are very grounded: Lois is grappling with guilt and her own feelings of abandonment, and her unwillingness to open it about it is creating tension in her marriage; Jonathan is getting the playing time he wants on the football field; Jordan's girlfriend went away to camp, and now she's acting distant; Kyle is jealous of the mayoral candidate Lana is backing, even though he understands why she's so invested in ousting the incumbent. I like the family stuff and the small town stuff is just as important to the show, if not more important, than the superheroics.

At the same time, the show doesn't skimp with the superheroics. Superman saving the North Korean sub was another standout sequence.

I like how affable General Lane's replacement is at the DoD. He got the job because he idolized Superman, and their rift ultimately comes down to ideology. Superman sees himself as Earth's protector, while Anderson needs him to be America's protector. And now, in lieu of that, he's dressing his own superpowered recruits up in the S shield and sending them out into the world. That's not necessarily a bad thing; just like the rest of America's military, they are capable of doing a lot of good. But they're green in ways that this iteration of Superman in particular is not. And they've taken an oath to support and defend the Constitution of the United States against all enemies, foreign and domestic;, to bear true faith and allegiance to the same, and to obey the orders of the president of the United States and the orders of the officers appointed over them. They're part of a command structure in a way that Superman is not. And much like nuclear weapons, superhumans under such conditions are only as good as the people giving them their orders.

The stuff with Natalie Irons was just heartbreaking. Imagine literally tearing through the fabric of the universe to find your dad, succeeding, and then immediately being rejected by a woman who looks exactly like your mother -- a woman who is genetically indistinguishable from your mother, alike in just about every facet of her being except for the parts that your mother shared with you. And then going back to school, and seeing lots of familiar faces of people you knew really well. But none of them know you. It's like the scenario from It's a Wonderful Life, where Clarence shows George Bailey what the world would be like if he'd never been born. Except, in this case, the world where Natalie was never born is so much better than the world she's from. Imagine, seeing the world without you and feeling like it's better off. That just horrific.

And that ties back to Lois's mom walking out and Sam, Lucy, and her when she was younger. It makes me wonder if Lois's mom will be making an appearance later this season. But in this case, even though she has no immediate maternal feelings toward Natalie, her own sense of abandonment allows her to empathize with this girl from another universe. It's a way in, a way for them to begin to build their own relationship separate from the relationship Natalie had with the Lois of her world.

And so now we've got one of the most bizarre blended families ever:

It was a solid premiere episode. It took me a bit to figure out that Anderson's people didn't cause the earthquake. We appear to get a glimpse of what is behind that at the end. It should be an interesting season.
You must log in or register to reply here.