The World’s Most Epic Race Against Time Continues 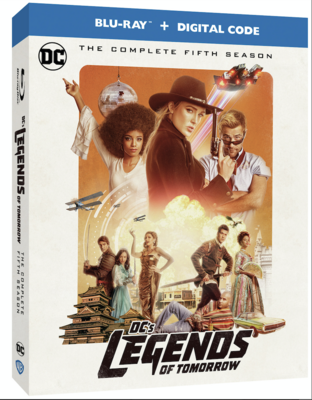 DC’s Legends of Tomorrow follows a group of misfit heroes as they fight, talk, and sing their way through protecting the timeline from aberrations, anomalies, and anything else that threatens to mess with history. After saving the world via the power of song and themed entertainment in last season’s finale, the Legends are major celebrities. Some struggle with the transition from lovable losers to A-list stars, while others start letting fame go to their heads. When a documentary crew decides to film the Legends in action, distracting them from their original mission, Astra Logue frees history’s most notorious villains from Hell in a bid for power. It’s up to the Legends to forgo fame and stop these reanimated souls (who they quickly dub “Encores”) from wreaking havoc on the timeline, whether it’s Rasputin popping out of his coffin and trying to become an immortal tsar or Marie Antoinette (and her head) turning the French Revolution into a deadly, non-stop party.

“After five strong seasons, DC’s Legends of Tomorrow continues to score in ratings and ranks as one of top series for The CW,” said Rosemary Markson, WBHE Senior Vice President, TV Marketing. "Embrace the weird, and get ready to binge on wild plot twists and compassionate storytelling from the unique “Legends,” as well as unbelievable bonus content that will keep you engaged for hours!”

With Blu-ray’s unsurpassed picture and sound, DC’s Legends of Tomorrow: The Complete Fifth Season Blu-ray release will include 1080p Full HD Video with DTS-HD Master Audio for English 5.1.Featuring all 15 episodes from the fifth season in high definition, as well as a digital code of the season (available in the U.S. only).

15 ONE-HOUR EPISODES
1.Crisis on Infinite Earths: Hour Five
2.Meet The Legends
3.Miss Me, Kiss Me, Love Me
4.Slay Anything
5.A Head of Her Time
6.Mortal Khanbat
7.Mr. Parker's Cul-de-Sac
8.Romeo V Juliet: Dawn of Justness
9.Zari, Not Zari
10.The Great British Fake Off
11.Ship Broken
12.Freaks & Greeks
13.I Am Legends
14.The One Where We're Trapped on TV
15.Swan Thong


DIGITAL​
The fifth season of DC’s Legends of Tomorrow is also currently available to own on Digital. Digital allows consumers to instantly stream and download all episodes to watch anywhere and anytime on their favorite devices. Digital is available from various retailers including iTunes, Amazon Video, PlayStation, Vudu, Xbox and others. A Digital Copy is also included with the purchase of specially marked Blu-ray discs (available in the U.S.) for redemption and cloud storage.