I received, THE ADVENTURES Of JIM BOWIE today. The 38 episodes are on on 5 DVDs, slim cased and boxed in the now standard Critic's Choice style. Still $29.96 from DeepDiscountdvd.com. ($.78 per episode.)

It's from CC and SFM Entertainment with the copyright listed as: Edelman Family Partnership.

Quote from the box: "In our continuing effort to bring you TV's Greatest Shows, Critic's Choice has licensed all 76 original network run film masters (not syndication prints) and digitally remastered them all for unparalleled picture and audio quality." So that means they will definitely be doing Season 2.

The first episode features a longer version of the opening theme and the end credits on many episodes include sponser product placements. There's a short 'extra' that features star Scott Forbes, dressed in a modern suit, inviting us back next week.

I actually thought the VCI and earlier CC releases had pretty nice prints so my first impression is that this new release is not a huge improvement. The grey scale is excellent. It looks really nice on my computer monitor, so I probably need a new TV. I did check an episode that I also have on the earlier VCI and CC releases "Jackson's Assassination". This episode on the new release seems to have a haze over it that doesn't appear on the other versions. It's a dark episode so maybe they went too far in trying to lighten it.

All in all, I am pleased with the release and will be on board for Season 2. I like the show. It's use of narration,the vocals by the Ken Darby Singers, Scott Forbes, let me tell you a story performance, and the way the stories use historical figures and happenings. And of course the show is full of familiar character actors and budding TV stars: Michael Landon, Edd Byrnes, Deforest Kelly,Mike 'Touch' Conners etc..
S

Thanks for the info Bob.

This series was never shown here in the UK until S1 surfaced on a satellite channel about 12 years ago, which I taped. Had been planning to transfer them to DVD but think I will go for the boxset instead.

Good news that we will also be getting S2 Critics Choice do seem to follow through with their releases so someone must be buying them. Hopefully than can obtain further gems.

Correct about the various early appearances of guest stars, note also that Paul Playdon later an acclaimed screeenwriter for 'Mission Impossible' and other series had a regular role as a young boy in the series.

I'm about half-way through with the set. The prints are admittedly a tad grainier than I expected, but perfectly adequate. It's been much more satisfying seeing this series develop chronologically, compared to the erratic nature of the p.d. releases. You can note the continuity via a steady stream of recurring characters and such, which makes it seem a more finely textured series as a whole. It's still a woefully low-budget series, hampered by claustrophobic backdrops and such, but I'm finding the aforementioned virtues offsetting those negatives, to a certain degree. Lots of good, familiar character actors, too. Interesting how the series seems so careful in toning down the occasional knife-fights!

My impressions are very similar to Bert Greene's. The show is grainer than I thought it would be based on other recent CC releases like "Sgt. Preston", "Dangerous Assignment" and "Hopalong Cassidy." I had hoped to see clean prints, but these aren't cleaned up. Now that's not to say they are horrible because they aren't that bad. Just not as high a visual quality as I had hoped for.

The series itself is probably suffering in my personal ratings simply because I've been watching things like "Rawhide" and "The Big Valley" recently. And the wide-open spaces and beautiful outdoor scenery make "Jim Bowie" pale in comparison. I know I shouldn't let these things come into view when watching a lower budget show like "Bowie", but it's a startling difference. Bert's "claustrophobic backdrops" are a spot on analysis, especially after watching the other shows I've just mentioned.

In spite of the negatives, the show is still a decent series and I'm glad to own this first season.

Gary "I'd still buy a second set in spite of the issues mentioned" O. 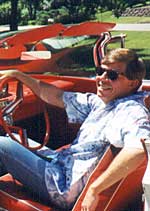 I don't own the set, but have been watching the few episodes included in Mill Creek's "Ultimate TV Westerns". I'm intrigued by the lack of orchestration and use of the Ken Darby Singers. Do you suppose this was some sort of cost-saving at the time?

Absolutely; many of the shows of the 1950s used library music as a cost cutting measure. If I recall correctly, there were some issues with the musicians unions at the time that made the cost of music scoring for television shows cost prohibitive. The Ken Darby Singers also did the humming (er, scoring) in the early years for "Wyatt Earp," another Louis Edelman production.

Also, the use of a choral group made Earp and Bowie different from the other 37 westerns that were on at the time. Another Louis Edelman/Desilu production that used Ken Darby was a show I have no memory of ever seeing called THE CALIFORNIANS (1957-59).

When trouble was brewing, I could always get a laugh out of a TV savy friend by humming the Ken Darby Singers/ Wyatt Earp.... oohh, oohh,oohh.....oohhhh!!

While there is still no sign of a stand-alone Jim Bowie Season 2, Deepdiscount.com has lowered the price of: THE ADVENTURES OF JIM BOWIE-The Complete Collection to, $29.89 If that price holds to their June 20% off sale you could pick up the two season set for $23.93 for all 76 episodes. (Deepdiscount is selling Season 1 alone for $30.86.)

I weakened and bought the Complete Collection during the November 20% off sale for about $8.00 more than the current price.

The second season of Jim Bowie continues with fun and interesting, historically based stories: mesmerism, the invention of the craps dice game, Davey Crockett, and Johnny Appleseed. There was a lot going on in 1830. The Appleseed story is very wierd and creepy.

Chuck Conners and June Carter Cash are in two episodes each. Rose Marie and Morey Amsterdam even appear together in the same episode!

One strange thing is that, Scott Forbes does not appear as Jim Bowie in the last episode. The story stars an actor I am not familiar with playing a friend of Jim Bowie's who takes Bowie's place on a mission, wearing his clothes,carrying his knife and even riding his horse!

Why was Forbes not in this episode? Was he ill? Did he quit? Would they really have continued the series with a character pretending to be Jim Bowie?

I don't know the answer to your question, Bob, but I was very surprised to learn that Scott Forbes was British. I was watching an episode of "The Avengers" (Honor Blackman version) one day and there he was, as a villain, speaking the King's English. After a fairly active career in US television during the 1950s, he headed back home to England in the early 1960s and remained active in British television up until the early 1970s.