Too family friendly for its own good 3.5 Stars

The Legend of Zorro receives a 4K upgrade from Sony Pictures Home Entertainment, but unlike its predecessor, this is a digital-only release.

It was a long seven years to wait for a follow-up to The Mask of Zorro, and when The Legend of Zorro finally arrived in theaters, it seemed like no one, not even the studio, cared much for this sequel. The first film was an exciting action film with good performances and an intelligent screenplay. Most of the cast and crew returned for this outing – actors Antonio Banderas and Catherine Zeta-Jones, director Martin Campbell, composer James Horner, even the producing team of Steven Spielberg, Laurie McDonald and Walter F. Parkes. Notably absent are screenwriters Ted Elliott & Terry Rossio, who end up having to share a “Story by” credit with screenwriters Roberto Orci & Alex Kurtzman, and that is possibly where much of the blame lies in this sequel that does not even try to live up to the original, instead trying too hard to be more family friendly and cartoonish.

It is 1850, and residents of California are about to vote for statehood with the United States while the country is destined for Civil War. When we last saw Zorro/Alejandro (Antonio Banderas), he and Elena (Catherine Zeta-Jones) had married and were raising a baby boy. Joaquin (Adrian Alonso) is now eight years old and much like his father, causing mischief in school and wanting to be just like Zorro, although he doesn’t know who Zorro’s true identity is. A sadistic crazed bandit, Jacob McGivens (Nick Chinlund), who claims to be a man of God, interrupts Election Day in the town square in hopes of keeping California independent, but is thwarted by the masked crusader. However, Elena has had enough of her husband playing Zorro and wants him to be a real father to their son.  Alejandro cannot help himself, feeling a need to protect and fight for the people, causing Elena to file for divorce.

Several months later, a French count, Armand (Rufus Sewell), arrives to throw a lavish party with Elena at his side. This does not sit well with Alejandro, who’s attempts at winning Elena back fail over and over again. Alejandro also has a gut feeling that Armand is up to no good, and as it turns out Elena has been undercover trying to find out the same. Armand’s plot is a doozy, something so insipid that only Orci & Kurtzman (who also wrote the first two Transformers movies as well as Cowboys & Aliens) could come up with, extracting nitro glycerin from cases upon cases of soap and hiding them in bottles of wine from his own vineyard, and presenting them to high-ranking officials in Washington, DC to accelerate the declaration of Civil War. The screenplay spends way too much time with domestic sitcom-style squabbles between Alejandro and Elena, and Zorro’s horse Tornado has been reduced to a live-action cartoon character. The movie is not entirely unwatchable, but it is a major disappointment.

Sony has given The Legend of Zorro a 4K upgrade (per IMDB, the movie was shot on 35mm film and completed as a 2K digital intermediate), but unlike The Mask of Zorro, this upgrade is digital only with no physical 4K UHD Blu-ray release planned. Digital can be tricky to review, as there are several factors involved that can cause issues beyond the viewers control, such as internet traffic and bandwidth, the encode a particular digital retailer is using, and how that encode performs on that retailer’s app on various streaming devices. At the time I screened this for review, the movie was only available in UHD on the following retailers: Apple TV (HDR10/DV), Movies Anywhere (HDR10), Google Play Movies (HDR10) and Amazon Prime Video (HDR10), with Vudu upgrading to UHD just prior to the publication of this review. Movies Anywhere had missing “burned-in” or “forced” subtitles during the scene (time mark 1:11:35) where only Spanish was spoken (Apple TV has the same issue), yet that was the retailer I chose to view the film on. I did confirm that those missing subtitles were present on Amazon Prime Video.

All that being said, this is an exceptionally good 2160p upscale. Compared to the 2007 Blu-ray, there is a noticeable uptick in detail (although not quite to the same extent as on The Mask of Zorro). Fabric textures and facial features are more defined, with green screen backgrounds and miniatures much more obvious. Colors are more natural without appearing overly saturated. Contrast is excellent, providing deep blacks with both fine shadow detail and more defined textures in Zorro’s black costume. There also were no noticeable compression or other artifacts.

The Legend of Zorro contains essentially the same Dolby Digital+ 5.1 audio mix as its older 1080p streaming edition, which isn’t all that different from the Dolby TrueHD 5.1 mix fund on the 2007 Blu-ray. The track has excellent fidelity and dynamic range, with a wide and expansive soundstage. Sounds are well-placed, matching their locations on and off screen. LFE is strong, adding necessary emphasis to explosions, a racing locomotive, horse hooves, etc. James Horner’s score is immersive and makes use all of the available speakers (the score was available at one time on a hybrid CD/SACD with a terrific 5.1 mix). Dialogue is clear and understandable throughout.

One of my big complaints regarding digital is the inconsistency between retailers of including extras. In the case of The Legend of Zorro, the only digital retailer to offer access to any special features is Movies Anywhere (unless you own an Apple TV device, which adds in the Blu-ray’s commentary track).

Director’s Deleted Scenes (480i): Four scenes are available with or without commentary – Alternate Opening & Closing (3:52) only available with Commentary; Alejandro Drops Off Joaquin (1:22); Chinatown (1:47); and Symphony By the Bay (3:23).

Armand’s Party Featurette (480i; 12:00): A behind the scenes look at creating the big party sequence at Armand’s plantation.

As a movie, The Legend of Zorro is a big disappointment, although the presentation is on par with most Sony 4K catalog releases.

Sadly, this is one of those sequels I like to pretend never happened. The first one left so much room for continuing the adventures of these characters, but this squandered that potential. I was bored watching it, and that never happens with the original. Oh well.
Reactions: ManW_TheUncool

Jake Lipson said:
Sadly, this is one of those sequels I like to pretend never happened. The first one left so much room for continuing the adventures of these characters, but this squandered that potential. I was bored watching it, and that never happens with the original. Oh well.
Click to expand...

I feel much the same way regarding A Good Day to Die Hard - I prefer to deny that it even exists.
Reactions: Jake Lipson

I liked the movie but I agree it wasn’t as good as the first one. 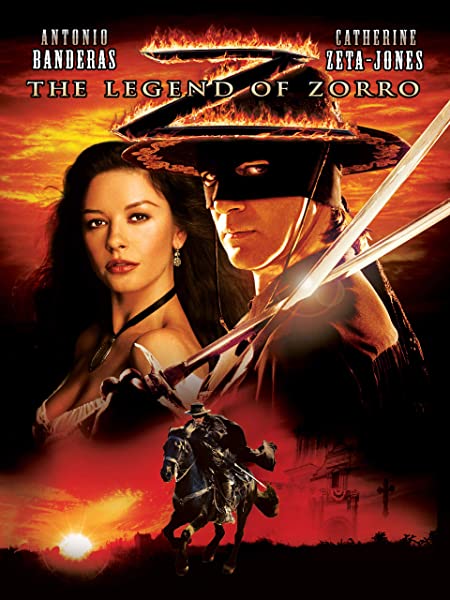