Forum List What's new Dark Style Change width
Log in Register
What's new Search
Menu
Log in
Register
Navigation
Install the app
More options
Dark Style
Close Menu
Posted on May 19, 2020 by Todd Erwin
You are using an out of date browser. It may not display this or other websites correctly.
You should upgrade or use an alternative browser.
Delightfully entertaining 4 Stars

The latest film adaptation of Jane Austen’s satire on societal roles, Emma, arrives on Blu-ray after a brief theatrical run (due to the COVID-19 pandemic) and pay per view window.

Emma (Anya Taylor-Joy) is a spoiled, entitled rich girl approaching womanhood who loves to play matchmaker. When her matchmaking skills cause her to lose Miss Taylor (Gemma Whelan), a close friend that was more like a mother to her, she does almost everything she can to keep her new found friend, Harriet (Mia Goth), from marrying her true match, Robert Martin (Connor Swindells). One of Emma’s real problems is that she often has no filter, often saying something that is hurtful to someone before thinking first. She also lives at home with her hypochondriac father (Bill Nighy), with Mr. Knightley (Johnny Flynn) often stopping by the estate just to have some company. But can she put her matchmaking skills to the test and match herself to the ever-absent Frank Churchill (Callum Turner) before he falls in love with someone else? Or has her true love been under her nose all this time?

Jane Austen’s Emma. has been adapted for the screen multiple times for both the small and big screen, starting with a live production on the BBC in 1948, a 1996 TV movie for ITV starring Kate Beckinsale in the title role, a 1996 movie starring Gwyneth Paltrow, the 1995 movie Clueless starring Alicia Silverstone written and directed by Amy Heckerling, a four-part BBC mini-series in 2009 to name but a few. So, you may ask, did we really need yet another adaptation now in 2020? My initial reaction was, “Not really,” but first-time director Autumn de Wilde has assembled an impressive cast and a smart screenplay by Eleanor Catton that quickly made me change my mind. Anya Taylor-Joy makes the role of Emma her own, not just in her line delivery but in her screen presence as well. Bill Nighy as Emma’s father is simply hilarious by playing it straight and understated. The production design by Kave Quinn is lush and often quite beautiful. Director Autumn de Wilde brings a sense of fun on her fresh spin of this classic tale.

Emma. was captured at 4.5K resolution on Arri Alexa LF cameras and completed as a 4K digital intermediate. Universal has decided (at this time) to forego a physical media UHD release (the movie is available digitally in UHD) and instead release it on Blu-ray. The 1080p AVC-encoded transfer is simply stunning. This is a bright and vivid picture with colors that appear natural and not overly saturated. Contrast is also excellent, with deep blacks that still retain detail in low light sequences. Detail is sharp throughout, highlighting fabric textures and facial features. Another terrific Blu-ray from Universal.

The DTS-HD MA 5.1 track isn’t likely to wow your friends in its design, but it does complete its job to perfection. This is a dialogue-driven movie, and this track excels at delivering clear and understandable dialogue throughout. Music and ambient sound effects round out the mix, helping to provide a wide and sometimes expansive soundfield. LFE doesn’t have all that much to do, other than provide some of the sound effects and music a nice rounded low end.

Deleted Scenes (1080p; 13:24): A total of ten scenes are included – Miss Smith Waits for Tea; Mr. Elton and the Portrait; It’s Dark in Here; I Never Dine With Anybody; Gossip at the Haberdashery; Let Us Pay a Call on Jane Fairfax; Freshen the Sponge, Bartholomew; Dressing Miss Woodhouse; A Post for Dear Jane; and You Owe Me No Apologies.

Emma. was a delight to watch, and Universal’s Blu-ray presentation was outstanding.

I saw this film in the cinema the weekend before all of them closed due to Covid. Didn't love Anya Taylor-Joy as Emma (Romola Garai is still my favourite), but this film is a sumptuous feast for the eyes. I bought the 4K digital on iTunes.

Andrew Budgell said:
I saw this film in the cinema the weekend before all of them closed due to Covid. Didn't love Anya Taylor-Joy as Emma (Romola Garai is still my favourite), but this film is a sumptuous feast for the eyes.
Click to expand...

One of the deleted scenes includes Taylor-Joy in a semi-translucent nightie. That's a feast for the eyes!

It did indeed look beautiful but I really disliked it. But I might have to seek out that deleted scene!

Mine also. I thought Jonny Lee Miller was a tad too young as her Mr. Knightley, but it was otherwise the perfect adaptation.

AnthonyClarke said:
It did indeed look beautiful but I really disliked it. But I might have to seek out that deleted scene!
Click to expand...

I just posted these thoughts in the "Daily Viewing" thread. Should have put them here first.

Both Peg and I--going in--realized neither one of us knew anything about this particular Austen tale.

We both enjoyed this particular film. We've never seen another based on the story. For one thing, it was absolutely beautiful. And quite colorful. But did I mention how beautiful it was?!? Just gorgeous. When it was done it seemed like you could count the number of times the camera panned right or left on one hand.

It's too bad it wasn't released in 4k. Oh. And the music was terrific. Outside of the score, the vocal interludes were used in an edgy and innovative way to bridge scenes. It was very interesting and effective.

We are both looking forward to revisiting it (not in a La La Land way, mind you )...but, soon!

Emma is in 4K/HDR digitally on iTunes.

I liked it when I saw it in the theater shortly before they closed.

Mike Frezon said:
We've never seen another based on the story.
Click to expand...

There must be some other serious cinematic attempts at Emma, I would think?

Clueless is one of the better ones.

There must be some other serious cinematic attempts at Emma, I would think?
Click to expand...

There was a 1996 "Emma" with Gwyneth Paltrow - plus plenty of others. That's just a semi-recent high-profile version...

I hadn't considered Lily James in the title role, but now that you mention it, I think she would be have been great! Perhaps a bit too mature for the role now, but she always brings a youthful vivacity to the roles she plays, so no one probably would have noticed that discrepancy.

If you enjoyed the story, definitely check out the 2009 BBC adaptation with Romola Garai, who I think is the ideal Emma, even if she doesn't exactly portray her the way Austen wrote the character. The one with Paltrow is pretty good, and there's another TV adaptation Kate Beckinsale, which I'm not sure I've actually seen, but it's in HD on iTunes.

Andrew Budgell said:
I hadn't considered Lily James in the title role, but now that you mention it, I think she would be have been great! Perhaps a bit too mature for the role now, but she always brings a youthful vivacity to the roles she plays, so no one probably would have noticed that discrepancy.
Click to expand...

Perhaps, but Emma's supposed to be 20, and James would've been 30 during the shoot. That's an awfully big difference - not Stockard Channing in "Grease" big, but still a leap.

Taylor-Joy was 23 during production, so much closer in age...

I have the Kate Beckinsale, the Gwyneth Paltrow, and the Ramola Garai Blu-rays. (I prefer the Garai.) Can someone please tell me if I need the latest version?

I have the Kate Beckinsale and Ramola Garai versions. My preference is for the Beckinsale.
Of all the adaptations of Austen, my absolute favourite is 'Persuasion' with Amanda Root and Cieran Hynds. That is really worth seeking out. Amanda Root is so special in this, with tangible vulnerability.

Of all the adaptations of Austen, my absolute favourite is 'Persuasion' with Amanda Root and Ciaran Hynds. That is really worth seeking out. Amanda Root is so special in this, with tangible vulnerability.
Click to expand...

In my book, this is by far the best Jane Austen adaptation ever made. As you say, Amanda Root is superb.

The pacing here was dreadful. I so wanted to like it.

Mark Mayes said:
I soon realized that the lead actress was lacking in the charisma and star-power needed to maintain interest.
Click to expand...

I would say this decides it for me. I'll give the latest Emma a miss. Re the Paltrow version, I agree that the supporting cast are terrific.
You must log in or register to reply here. 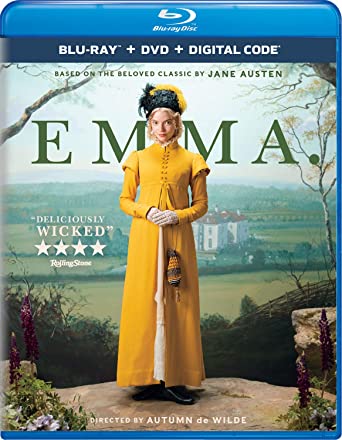