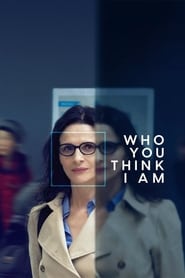 Title: Who You Think I Am

Plot: Claire, a romantically spurned 50-year-old divorced teacher, creates a fake Facebook profile of a 24-year-old woman to spy on her on-and-off lover.
Safy Nebbou's adaptation of Camille Laurens' novel uses the modern gloss of social media to tell an age old story of a woman of a certain age going through a mid-life crisis. Claire (Juliette Binoche) is a fifty-something teacher who is still getting over a divorce. On a mischievous whim, she creates a fake Facebook account as “Clara” - a pretty young woman half her age. Her catfish target becomes Alex (Francois Civil), a young man who is more in Clara's age group than her own.

What keeps the viewer 'hooked'' throughout is Binoche's performance. Gilles Porte's camera rests on her face for long stretches (he also provides some striking compositions elsewhere). Nebbou keeps the focus on Binoche's visage throughout. Claire keeps most of her emotions within, but, Binoche still invites one into her soul. Her character is a lonely needy one and you could say that the camera's attention is reflective of what she craves internally. Social media may be a new angle here, but, it's little different from stories that used letter writing, the phone (of which Claire uses as well) or outright stalking. Old bottles, new wine.

The movie is most effective when the social media aspect is in the background. Yes, there are some interesting observations about how the anonymity of the digital age can fuel a fantasy world, but, it's only towards the end when that aspect becomes front and center - and, that shift isn't fully satisfying. Apparently, Laurens' novel is structured differently so it's more on Nebbou and co-writer Julie Peyr than the source material. There are some interesting psychological angles that do get revealed, but, they would have been stronger if they had been synthesized within the heart of the tale, which is more personal and less “plot” oriented. Binoche's acting is so strong that WHO YOU THINK I AM never fully loses it's way, but, the last chapter could use a re-write.
Movie information in first post provided by The Movie Database
You must log in or register to reply here.