The Snows of Kilimanjaro DVD Review

Pasting plot pieces from several stories by Ernest Hemingway to fashion its episodic story, Henry King’s The Snows of Kilimanjaro makes for an entertaining triple dose of Hemingway storytelling. With a top cast of stars and some gorgeous Oscar-nominated color cinematography by the dean of color photography Leon Shamroy, The Snows of Kilimanjaro offers a pleasing feast for lovers of classic cinema. This Fox made-on-demand disc is the real McCoy in terms of quality: the film was one which went out of copyright and into the public domain with tons of subpar versions floating around for years, but those who want it and don’t have it can rest easily with this budget-priced release. 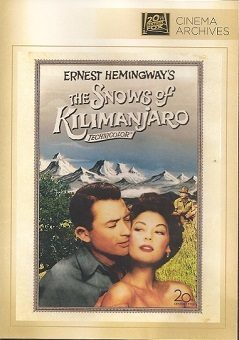 Celebrated writer Harry Street (Gregory Peck), injured during his second African safari, goes in and out of consciousness remembering his professional and personal ups and downs while current lady love Helen (Susan Hayward) tends to his infected leg wound. Harry remembers the early struggles to get published and a whirlwind romance and marriage with the vivacious Cynthia Green (Ava Gardner) before they came to a parting of the ways. He also recalls his time wooing a countess (Hildegarde Neff) as well as his foolhardy experience fighting in the Spanish Civil War. But always memories of the beautiful Cynthia haunt him, so much so that Helen despairs that she will ever be able to convince Harry to marry her.

Casey Robinson’s screenplay is of necessity a piecemeal affair culled as it has been from several Hemingway sources (the title tale was a mere short story) as well as exploits from Hemingway’s own life, and as such, he’s made the writer/main character something of a selfish bounder always rushing around the globe looking for his next adventure while the various women he romances must fit their hopes and needs within the framework of his life. This gets to be absurd when Cynthia finds herself not only pregnant but also under doctor’s orders to cease any strenuous activity and take to her bed. Though she desperately wants a child, she can’t bring herself to tell Harry her news hemming and hawing in a scene that must set some kind of record for delayed revelation of important events (and later Harry thinks her selfish for her actions even though he had told her he wasn’t interested in a child at that moment in their lives). It’s frustrating moments such as these that prevent the viewer from dredging up complete sympathy for Harry as he lies at death’s doorstep while turkey vultures and hyenas circle the African camp sensing his death is near (the good will that Gregory Peck usually brings with him into a project basically saves the character for the film). Director Henry King can’t quite seamlessly blend the studio work with rear projection photography for the principals with the actual location shots taken in Africa, Paris, Spain, and the Riviera, but scenes do segue smoothly into and out of the multiple flashbacks as Harry deliriously recalls the highlights of his life.

Ava Gardner emerges as the most sympathetic and glamorous performer from this project, third-billed as Harry’s first wife with a thirst for life which mirrors his own at first but whose consuming love for her husband later proves to be a millstone around his neck. Gregory Peck has lots of high and low points during the proceedings fully convincing us of his love of life though never quite managing to convey any special abilities as a writer. Susan Hayward’s role is the least showy of the three stars, but her firm will to take charge and manage as best she can is never in doubt, and her underlying strength comes through in spades. Hildegarde Neff is rather brittle and braying as the vapid Countess Liz whose jealousy and demanding nature dooms any chance of a lasting relationship with Harry. Leo G. Carroll brings his always welcome presence to the film as Harry’s loving and supportive Uncle Bill, and Marcel Dalio as the proprietor of a Parisian artist’s café has a couple of effective scenes of his own. Torin Thatcher is quite good as the doctor, and Richard Allan melts the screen as a Spanish dancer coming on to Cynthia with his looks and talent.

The film’s original 1.37:1 theatrical aspect ratio is faithfully represented in this solid made-on-demand DVD representation. The imagery upconverts quite beautifully and impressively with an intricately woven herringbone suit not flashing one iota and with sharpness exceptionally crisp and filled with detail throughout. While it’s never quite clear if these are the original Technicolor elements (the early scenes with Ava Gardner certainly appear to be) or one of Fox’s make-do Eastmancolor transfers from the later junked elements, the color looks solid and skin tones look very pleasing indeed (there is even one moment which appears to have color fringing from the three ill-fitting layers). Additionally, the frames have been scrupulously cleaned and look really impressive. The movie has been divided into 12 chapters.

The Dolby Digital 2.0 sound mix is decoded by Dolby Prologic into the center channel. The mono soundtrack has a few problems with distortion when voices are raised as well as some occasional light hiss and some modest crackle during quieter moments or during reel changes. Otherwise, the dialogue has been mixed well with Bernard Herrmann’s effective background score and the atmospheric effects which bring the jungle and the plains of the Spanish Civil War effectively into one’s home theater space.

There are no bonus features with this made-on-demand release, not even a theatrical trailer.

The Snows of Kilimanjaro is a classic worthy of greater attention from its home studio. With these top stars and the beautiful, Oscar-nominated production design and cinematography, it would make for a stunning Blu-ray release. Until that happens, this DVD-MOD is a more than adequate substitute. Recommended!

Isn't this just the MOD version of the previously released Fox replicated disc?

I assume so. I didn't have the other one with which to compare.

I have this dvd in the Ernest Hemingway collection which looks quite good.
You must log in or register to reply here.