The Night of the Generals Blu-ray Review

The Night of the Generals is a large-scale, star-studded murder mystery about a sadistic serial killer during World War II. What makes it a unique story is the fact that the murderer is a German general who likes to mutilate prostitutes ( in effect a latter-day Jack the Ripper). The film chronicles the efforts of a dogged military investigator to solve the crime, demonstrating a somewhat ironic obsession with one death while surrounded by carnage involving millions. This Sam Siegel production is another outstanding Blu-ray from Twilight Time, with an exceptional transfer provided by Sony. 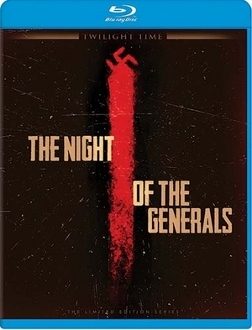 Then let's say that what is admirable on the large scale is monstrous on the small.

Late one night in German-occupied Warsaw in 1942, a man is walking up the staircase of a run-down apartment building when he hears a woman's screams. The man then hears footsteps and he ducks into a hallway lavatory to hide. Peering through a hole in the door, he observes the legs (but not the face) of a German officer who walks by. But this is not just any officer - the red stripe running down his trousers identifies him as a general. And the victim is not just any prostitute - she was an agent for the Germans. Consequently a military investigator, Major Grau (Omar Sharif), is assigned to the case. After being convinced that the witness is telling the truth, he discovers that all of the German generals in Warsaw have alibis except for three. They are General Kahlenberge (Donald Pleasance), a shrewd but fretful man who has some personal secrets to hide; General von Seidlitz-Gabler (Charles Gray), an ineffectual bureaucrat who carefully avoids taking a position on any controversial issue; and General Tanz (Peter O'Toole), recently transferred from the Eastern Front, where he earned the nickname "The Butcher."

General Tanz has been sent to Warsaw to stamp out the Polish resistance movement, which has forced the Germans to keep in Poland soldiers who are badly needed to fight the Russians. He forces Poles out of their homes and levels buildings when his soldiers are fired upon by resistance snipers. General Kahlenberge opposes the wanton destruction of Warsaw, but General von Seidlitz-Gabler stays true to form and refuses to express an opinion.

Corporal Hartmann (Tom Courtenay) is a young German soldier who has been recovering from wounds received on the Russian Front. He has been hailed as a hero after being credited with single-handedly killing 40 Russian soldiers, but he desperately wants to avoid being sent back into combat. His cousin is a sergeant on General Kahlenberge's staff, and Hartmann gets an interview with the general. Hartmann confesses that he is terrified at the thought of more fighting, but when he mentions that he has studied piano the general remembers that someone is needed to play at a dinner party being given by Mrs. von Seidlitz-Gabler (Coral Browne). At the party Hartmann meets General von Seidlitz-Gabler's daughter, Ulrike (Joanna Pettet). Ulrike has an often contentious relationship with her mother, but she enters into an intimate relationship with Hartmann.

In the meantime, Major Grau tries to question the three generals about their whereabouts on the night of the murder, but they do their best to avoid him. He finally corners them at the lavish dinner party, where he lets them know that they are suspects. However, before he is able to continue his investigation he is informed that he has been promoted and is being transferred to Paris. He suspects that one the generals has engineered the transfer, but he is helpless to do anything about it.

There is a rather jarring transition 33 minutes into the film, when suddenly we are 22 years into the future, at a bar in Berlin during the sixties, where Interpol Inspector Morand (Philippe Noiret) is preparing to interview the owner, who was General Kahlenberge's sergeant during the war. Inspector Morand is looking for Hartmann, for reasons which we will become clear later. Morand is involved because by the summer of 1944 all of the principal characters, including the three generals, Lt. Col. Grau (he was promoted, remember), and Hartmann are either in Paris or about to be there. The Allies have landed in Normandy and the tide of the war has inexorably turned against Germany. Kahlenberge and von Seidlitz-Gabler are upset when they learn that General Tanz is arriving in Paris earlier than expected. However, having all three generals in Paris at the same time gives Grau the opportunity to reopen his investigation. It also leads to another murder which is very similar to one which occurred in Warsaw, and Grau asks Morand for assistance.

Peter O'Toole is a commanding presence as General Tanz, a ruthless soldier who may or may not be mad. A scene of him being shown "decadent art" confiscated by the Germans and destined for Berlin is absolutely chilling. Donald Pleasance is excellent as Kahlenberge and Charles Gray is equally good as von Seidlitz-Gabler. Joanna Pettet is very appealing as Ulrike, and her performance will leave viewers wondering why she did not have a more productive career. Coral Browne is outstanding as Ulrike's domineering mother. Philippe Noiret is urbane and delightful as the persistent Inspector Morand. And let us not forget Omar Sharif, whose Lt. Col. Grau slyly enjoys his work and seems to be highly motivated by the prospect of bringing down a general. Christopher Plummer makes a brief and totally unnecessary appearance as General Erwin Rommel.

Producer Sam Siegel, who was responsible for blockbusters such as The Bridge Over the River Kwai and Lawrence of Arabia, convinced O'Toole and Sharif to join the cast in an apparent effort to recreate the magic of the latter film. He also hired Maurice Jarre to compose the film's score. The direction is by Anatole Litvak, who was in Germany when the Nazis came to power and clearly knew the subject matter well. The Night of the Generals is not entirely successful in resolving the question about why we are sometimes tolerant of loss of life in war but are horrified by it when it occurs in other circumstances, but it is a fascinating film. The murderer, when he is identified, blames his crimes on the war, but he did not become a general in Hitler’s army by loathing death and destruction.

The 2.35:1 1080p image is delivered via the AVC codec, and it looks superb. Exteriors were filmed on location in Poland by French cinematographer Henri Decae. Apart from a few brief instances of softness the picture is highly detailed, with excellent grain structure, solid and accurate colors, fine shadow detail and inky black levels.

Readers are encouraged to read the positive comments of our resident expert, Robert A. Harris:

A few words about...™ The Night of the Generals -- in Blu-ray

The English 1.0 DTS HD-MA soundtrack is surprisingly good, considering the sonic limitations of the original mono. Every word of dialogue is clear and understandable, and Maurice Jarre's score (which can be heard in stereo on the isolated score track) sounds terrific. The audio is free of distortion and other age-related anomalies.

The extras on this Blu-ray disc are limited to the original theatrical trailer, a teaser trailer, and the isolated score track.

An illustrated booklet contains stills from the film and an excellent essay by Julie Kirgo, who provides some intriguing insights into Sam Siegel's often combative style of producing films.

The Night of the Generals, although not entirely successful, is an intriguing hybrid which combines a war film with a mystery about a sadistic killer. Some viewers may find it to be overly meandering, while others are understandably put off by German soldiers speaking with English accents. Regardless, there is much to like about this film, including superb performances by an outstanding cast.

Those who are interested in purchasing it should be aware that this is a limited edition of 3,000 copies. You can verify that it is still available for purchase at the Screen Archives website.


The rich color against those inky blacks in the exterior night scenes make it almost three dimensional. Just gorgeous.


Any word on The Young Lions? Can't find a review anywhere. I'd have thought such an important film would have taken precedence over Generals (?)

marsnkc said:
Any word on The Young Lions? Can't find a review anywhere. I'd have thought such an important film would have taken preference over Generals (?)
Click to expand...

The Twilight Time screeners go to different reviewers, depending upon which studio it is from. The Young Lions is a Fox film, so Matt Hough will be reviewing it. I don't know if he has received it yet. I received The NIght of the Generals just this past Friday. Knowing Matt, his review will be posted less than 24 hours after he receives it, so keep your eyes peeled for it.

Matt's review of The Young Lions has been posted.
You must log in or register to reply here.