The Devil's Disciple is an amusing and generally faithful adaptation of the famous George Bernard Shaw play about the American Revolution. Among the film's many pleasures are the exceptional performances turned in by three of the cinema's greatest stars - Burt Lancaster, Kirk Douglas, and Laurence Olivier. It has now been brought to Blu-ray by Kino Lorber with a good, but not great, transfer. 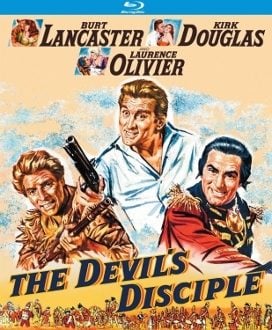 Take it easy, Swindon. Your friend, the British soldier, can stand up to anything except the British War Office - General John Burgoyne

The year is 1777, the third year of the American Revolution, and British General John Burgoyne (Laurence Olivier) is leading his troops to Albany, N.Y., where he plans to meet up with forces led by General William Howe. Burgoyne stops in Springtown, New Hampshire, where the lantern-jawed Major Swindon (Harry Andrews) has a penchant for hanging rebels, both real and supposed. Burgoyne disapproves, telling Swindon, "It is making too much of these people to hang them. Martyrdom is what they like. It is the one way to achieve fame without ability." Nevertheless, the general agrees to preside over the execution.

The unfortunate prisoner is Timothy Dudgeon, who in fact is not a rebel, although he was arrested after being seen with his brother Peter, who was a rebel and has already been hanged. Timothy is a resident of the nearby village of Websterbridge, and his son Christy (Neil McCallum) races there to get help. The Rev. Anthony Anderson (Burt Lancaster) is conducting Sunday service at the Websterbridge Presbyterian Church and is in the middle of his sermon when Christy bursts in. The clergyman agrees to ride with Christy to Springtown, certain that he will be able to clear Timothy's name and save him from the gallows. As Anderson prepares to leave he asks his pretty young wife Judith (Janette Scott) to go see Mrs. Dudgeon (Eva Le Gallienne), who is ill, and look after her until he returns with Timothy.

Alas, Anderson and Christy arrive in Springtown too late to prevent the execution. Anderson is appalled when he learns that Major Swindon plans to leave Timothy's body hanging in the noose as a lesson to other would-be rebels. Anderson attempts to have the body taken down, but he is warned that he will be arrested if he persists. That night he hears a noise outside of his church, and while investigating he finds the body of Timothy Dudgeon in the church graveyard. It has been brought there by Richard "Dick" Dudgeon (Kirk Douglas), the black sheep of the Dudgeon family and the devil's disciple of the title, who has a reputation for being a rogue. Dick shed no tears over the death of his father, with whom he was estranged, explaining to Anderson that he cut down the body in order to spite the British.

Timothy's body is buried the next morning, and Dick unexpectedly shows up for the reading of the will. To the dismay of Mr. Dudgeon and the other relatives, Timothy has left the family house to Dick, the elder son, and has left nothing to his wife. As Mrs. Dudgeon leaves the house with her meager belongings, her last words to Dick are "My curse is on you." The only person who remains in the house with Dick is the young girl Essie (Jenny Jones), who is identified as a servant.

Judith Anderson, meanwhile, is both appalled by Dick and attracted to him. She loves her husband, but in a modest and restrained way. At bedtime she demurely averts her eyes when Anthony changes into his bedclothes, leaving the impression that their marriage is lacking in passion. Dick, on the other hand, is the epitome of passion, and he revels in his rakish behavior. When the British discover that Timothy Dudgeon's body has been buried in Websterbridge, it is feared that they will arrest Dick, but things become complicated when a matter of mistaken identity comes up.

George Bernard Shaw's intention when he wrote The Devil's Disciple was to satirize and skewer the British government for its uninspired, overconfident, and bumbling response to the rebellion in America. The British Army is largely led by unimaginative martinets such as Major Swindon. The only British soldier who comes across well in The Devil's Disciple is General Burgoyne, who has to pause and reflect when Anderson tells him, "You may occupy towns and win battles, General, but you cannot conquer a nation."

The Devil's Disciple was jointly produced by Burt Lancaster's production company, Hill-Hecht-Lancaster Productions, and Kirk Douglas' production company, Brynaprod S.A. The project was originally Lancaster's idea, but his company had begun to struggle financially and Douglas agreed to co-produce it as long as he was given the plum role of Dick Dudgeon, for which he is perfectly suited. Lancaster had to settle for the part of Rev. Anderson, a role which was re-written with an action scene that gives him the opportunity to display his exceptional athleticism. Lancaster later complained that the only person who made any money on the film was Olivier, who is excellent as General Burgoyne. Lancaster’s performance is relatively low-key in the first half of the film, which is in keeping with his part, but he comes to life when Rev. Anderson is forced to become a man of action. The original plan was to film The Devil's Disciple in color with a budget of $3 million, but that figure was cut in half and the movie was filmed in black & white. Even with all of its star power, The Devil's Disciple was not a box office success, although it is highly regarded today.

As noted, The Devil's Disciple is generally faithful to Shaw's play, although significant alterations were made by screenwriters John Dighton and Roland Kibbee. In the play General Burgoyne does not appear until the third act, whereas for the film the role is expanded in keeping with Olivier's salary and reputation. Mrs. Dudgeon plays a prominent role in the first act of the play, but here she has little to do other than look bitter and unhappy. In the play the servant Essie is actually the illegitimate daughter of Dick's uncle, a change which perhaps reflects the culture of the late fifties. The ending also has been changed, but to discuss it here would be a serious spoiler. Anyone interested in reading the play after watching the film can find it online here:

The original director of The Devil's Disciple was Alexander MacKendrick, but he was fired after clashing with Lancaster and Douglas. The film was completed by Guy Hamilton, who went on to great success as the director of several James Bond films.

The 1.85:1 1080p black & white image looks very good on my 46-inch Panasonic plasma display, but our esteemed expert Robert A. Harris has commented that on a very large screen the transfer "has the image constantly moving within the frame." Apart from that, the transfer has good detail, black levels and gray scale, with just a slight amount of dirt which is not distracting.

Readers who plan to view this Blu-ray on a very large screen are encouraged to read Mr. Harris' review:

The 1.0 DTS HD-MA mono soundtrack is a fine reproduction of the original. Every word of the witty dialogue is clear and understandable, and the music score by Richard Rodney Bennett is strong and free of distortion.

There are no subtitles on this Blu-ray disc.

The only extras are the feature's theatrical trailer, as well as trailers for four other features which star Burt Lancaster or Kirk Douglas: The Scalphunters, Cast a Giant Shadow, The Train, and Run Silent, Run Deep.

The Devil's Disciple has not previously been available on DVD or Blu-ray in the United States, so this release from Kino Lorber is a welcome addition to its catalog. The only caveat, as noted, is that viewers who plan to watch it on a very large display should take heed of Robert A. Harris' comments.

I forgot to mention that the disc is a BD-25, which is plenty of space for an 83-minute film with minimal extras.

I don't know why I've never seen this film, but it sounds like a winner and I certainly look forward to it now. Thanks for the review!

I'm overjoyed to have this on Blu-Ray and it looks pretty good. It's one of my favorite little-known gems. It has sparklingly witty dialog from the Bernard Shaw play and a neat character twist toward the end. Lancaster nicely underplays as befits his role and Douglas is at his roguish best. Then there's Olivier. Douglas asks to be shot like a man rather than hanged like a dog, and Olivier as the British general sardonically replies something like: "If you knew how deplorable is the marksmanship of my regiment, how half of them would miss you and the rest would pick you apart piecemeal, you would understand what a dreadfully messy affair it would be. Allow me to persuade you sir, be hanged." It's a rousing, smart, wry tale of the Revolution - a special treat to be savored.
You must log in or register to reply here.