After the enormous success of The Hunger Games, every Hollywood studio went looking for its own young adult action franchise. 20th Century Fox has come up with Wes Ball’s The Maze Runner, the first in a planned trilogy of quasi-science fiction suspense stories and a corker of an exciting and entertaining thriller. Starring a cast of mostly unknowns with a few familiar faces popping up in some key roles, the film is an edge-of-your-seat action film cleverly revealing only bits and pieces of its complex puzzle along the way. It’s aptly named: the literal maze the characters face is likewise experienced by the audience who will be finding their own way in the dark through this and subsequent twisty pieces of the story. 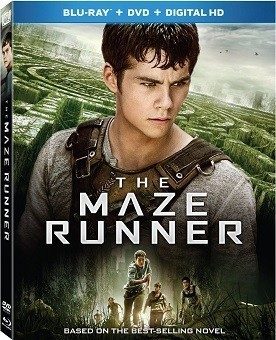 Waking up in a completely strange elevator which deposits him in an enormous glade surrounded by walls, a young amnesiac (who later remembers his name is Thomas – Dylan O’Brien) finds himself among a cadre of young men who have arrived there over the course of three years in similar circumstances. The walls which enclose them house an elaborate maze on the other side of them, a deadly area patrolled by killer creatures the lads call “grievers.” But Thomas’ arrival seems to have signaled a change in the status quo: things begin happening different from the routine they’ve become accustomed to, and Thomas is all for starting to be proactive about their escaping. He’s opposed by Gally (Will Poulter) who believes if they continue to play by the rules established, whoever is in charge will leave them in peace. But when one of the runners (guys whose job is to survey the maze on a daily basis and map its twists and turns) turns up dead and Thomas is named his replacement, he begins a full-on assault to discover the maze’s secrets turning the once peaceful tribe into a group whose members are now forming sides.There’s a bit of a Lord of the Flies vibe about the group dynamics here adapted from James Dashner’s book by various drafts from Noah Oppenheim, Grant Pierce Myers, and T.S. Nowlin. The main boys have wisely been individualized so you have a firm and appealing leader Alby (Aml Ameen), his right-hand man Newt (Thomas Brodie-Sangster), the head runner Minho (Ki Hong Lee), young group mascot Chuck (Blake Cooper), and the head builder/muscle Gally, and one can see various bonds grow and change among them and others. Director Wes Ball does a magnificent job taking a complex idea of this new civilization with its own rules and expectations of its members and portioning out just enough that we need to know at any given point to maintain a heightened sense of suspense and increasing dread (the film quite palpably gains in momentum as it unfolds) until the final half hour becomes quite breathless. Not that the preceding hour and a half are any less effective: from the very first confusing moments with Thomas’ arrival in this strange place and with no memory, the viewer is struggling (like he is) to sort things out and make sense of the situation we’ve been thrust into. And the journeys into the maze with its creepy sounds and the malevolent “grievers” sustain suspense with Hitchcockian ease. The magnificent production design (a mix of real sets with CGI) inspires awe continuously, and once we’ve been given a peak “behind the curtain” as the boys solve at least the first part of the puzzle, we’ve certainly been hooked completely and await future installments.Dylan O'Brien is an excellent Thomas, not overly cocky or domineering but possessed with a curiosity and a survival sense that make him an easy protagonist to get behind. The other actors who play key roles: Will Poulter, Thomas Brodie-Sangster, Aml Ameen, Blake Cooper, and Ki Hong Lee are spot-on with their characterizations and make appealing comrades or combatants depending on the situation. Less effective is the group’s one female denizen: Kaya Scodelario as Teresa. Partly due to her late arrival and partly due to an ill-explained purpose for her selection and a somewhat murky connection to Thomas (which may be explained more fully in later installments), she seems an appendage whose purpose hasn’t been fully justified yet. Patricia Clarkson arrives late to add both enlightenment and additional enigma to the proceedings in setting up the inevitable sequel.

The film’s theatrical 2.40:1 aspect ratio is faithfully delivered in a 1080p transfer using the AVC codec. Sharpness is outstanding except in moments where the necessities of CGI require things to be a tiny bit soft to better blend the real and the computerized. Color saturation levels are exceptional with rich and believable skin tones. Black levels are likewise first-rate especially in the maze at night when terrifying things can appear from the shadows. The film has been divided into 36 chapters.

The DTS-HD Master Audio 7.1 is reference quality all the way. From the opening moments where we hear things before we get even a glimpse of where we are, the audio mix is one of the primary components to the film’s true effectiveness. Split surround effects abound, and the LFE channel will give your subwoofer a real workout when the heavy door into the maze opens and shuts with thundering power, and the screeches of the grievers make for some great stomach-churning chills. John Paesano’s driving music gets a full spread through the fronts and rears. The well-recorded dialogue has been placed in the center channel.

Audio Commentary: director Wes Ball and writer T.S. Nowin have a lively and amiable conversation about all aspects of the production.Deleted Scenes (18:31, HD): nine scenes with optional director commentary. They may be watched individually or in montage.The Making of The Maze Runner (42:29, HD): author James Dashner, producers Lee Stollman and Wyck Godfrey, screenwriter Grant Pierce Myers, director Wes Ball, production designer Marc Fisichella, actors Ki Hong Lee, Dylan O"Brien, Aml Ameen, Will Poulter, Thomas Brodie-Sangster, Joe Adler, Kaya Scodelario, and Blake Cooper explain the film's production from the original novel through the creation of the world of the film, the casting process, the bonding process during the forty three-day production, and adding in the digital effects for the finished film.The Chuck Diaries (5:29, HD): actor Blake Cooper discusses his Twitter audition process for the role of Chuck, the casting call, and his camaraderie with the cast and crew.Gag Reel (6:43, HD)Visual Effects Reel (30:19, HD) split screen shows the actual filmed scenes and the scenes in the finished film as well as shots pre and post effects. Optional director commentary is also a feature here.VFX Breakdown By Method (3:44, HD): a brief montage of the above shots.Ruin (8:29, 3D and 2D HD): a sci-fi short film made by director Wes Ball showing his ease with CGI which got him the job for The Maze Runner. Director commentary is also optional. The 3D version offers exceptional depth and even a pop-out moment.Galleries: three separate photo and art galleries are provided.Theatrical Trailer (1:50, HD)Promo Trailers (HD): Let’s Be Cops, Dawn of the Planet of the Apes, If I Stay.The Maze Runner Comic Book: “My Friend George” enclosed in caseDVD/Digital Copy/Ultraviolet: disc and code sheet enclosed.

A very entertaining and involving sci-fi action-adventure tale, The Maze Runner is a first-rate thrill ride for all, one that doesn’t talk down to its audience and pulls them along for an exhilarating visual and auditory experience. Highly Recommended!

GREAT flick! Like The Hunger Games films, this is better than the book. I hope that the quality keeps up for the sequels. Haven't picked this up yet, but will before long.

speakers bounce sound off the ceiling.

Glad I didn't buy atmos I knew it was a con and auro no better dts UHD MD will be making some sneaky deal with studios no doubt to monopolize the sound format home market with its next sound 3d format. I bet that won't have BELOW SURROUND or any fancy 9 or 15 stage channels. What was waste money.

As for this film. I'd sooner spend £25.00 on cat food to feed my cat for 8 weeks, rather than wasting on film that should have gone straight to Dolby TrueHD 7.1 atmos.
J

I quite liked the movie; it preserved most of the original story elements while improving the pace. I think it will also have good re-watch value and I'm glad they're already filming the sequel.

I enjoyed this move in the theater, and thanks to your informative review I will definitely check out the Blu-ray! Thanks!
You must log in or register to reply here.