Another John Green young adult novel comes to the screen with Jake Schreier’s Paper Towns. A coming-of-age story that relies less on a tearjerking disease scenario found in last year’s The Fault in Our Stars and more on average teens discovering facets to living they hadn’t yet considered, the film seems expressly geared for a youthful market with little of interest for anyone beyond drinking age. Competently produced and acted, the movie wants to be more impassioned and meaningful than it actually ends up being. 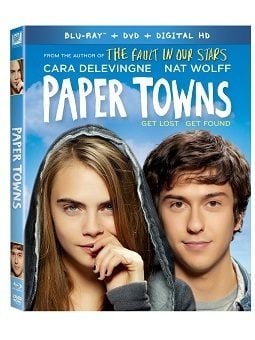 In love with his neighbor Margo (Cara Delevingne) from the time they were young children, high school senior Quentin Jacobson (Nat Wolff) would do just about anything to make her notice him. Nearing the end of the term, Margo asks Quentin to go with her on a late-night pilgrimage to exact some measure of revenge against her boy friend (Griffin Freeman) and friend Becca (Caitlin Carver) who have been cheating behind her back and her best friend Lacey (Halston Sage) who knew what was going on and said nothing. Quentin naturally goes along and has the time of his life, for once breaking out of his comfort zone and taking chances with the daring Margo. But Margo then goes missing, and Quentin gets the feeling it’s another scavenger hunt set up by Margo to allow Quentin to follow clues she’s left behind to have another unique adventure with her guidance and at the same time prove his love to her. With best friends Ben (Austin Abrams) and Radar (Justice Smith) along with him as well as Lacey who swears she knew nothing about the cheating and Radar’s girl friend Angela (Jaz Sinclair) tagging along, the quintet undertake a lengthy trek up the eastern seaboard trying to find the elusive Margo.

Having adapted John Green’s The Fault in Our Stars for its release last year, screenwriters Scott Neustadter and Michael H. Weber tackle another of these teen drenched dramedies with less impressive results this time out. The use of a wiser-than-her-years protagonist (in this case Margo) who spouts philosophical homilies to solve everyone’s problems (though the real problems simply seem to be growing up and lovesickness) is overly facile and indeed rather insulting ultimately when Margo inevitably claims to have been faking her worldly expertise at movie’s end. Worse, the characters aren’t all that interesting to start with, so their ordinary problems aren’t much to hang a nearly two-hour film on (is it really so terrible to have goals for one’s future as early as high school; this movie’s basic leitmotif is that it’s a tragedy). Director Jake Schreier does what he can to make the adolescent daily dilemmas and traumas believable: drunken teen parties, teenage sex, and school escapades including prom night, but parental guidance is on minimal display here (Margo’s parents have thrown up their hands on her continual running away), and Quentin’s obsessive search for the elusive object of his fantasies just seems to have been blown all out of proportion after one night of fun but no romantic encouragement on her part.

Nat Wolff portrays the average Quentin without fanfare or undue eccentricities; those are saved for the performances of Austin Abrams and Justice Smith as best friends Ben and Radar and both more than a trifle overly precious and somewhat irritating (especially Abrams) in their performances. Cara Delevingne hides her native accent well in playing the sage-like Margo though why this particular girl was the most popular in school remains another of the film’s unsolved mysteries. Halston Sage is actually the film’s most appealing character as the eager-for-respect Lacey (though the story’s pairing her off with the unappealing Ben takes a bit of dramatic license to accept). Josiah Cerio and Hannah Alligood are excellent representations of the youthful Quentin and Margo while Griffin Freeman, R.J. Shearer, and Caitlin Carver as high school top cats more than deserve the treatment they receive.

The film’s theatrical aspect ratio of 2.40:1 is faithfully delivered in a 1080p transfer using the AVC codec. Sharpness is quite pleasing without the razor-edged crispness that some transfers of modern films boast, and color is likewise controlled and appealing without bursting forth with excessive brightness. Contrast has been consistently maintained, but black levels are merely good rather than great. The movie has been divided into 28 chapters.

The DTS-HD Master Audio 5.1 sound mix derives most of its surround quality from Ryan Lott’s background score and a succession of pop ballads that play underneath the action. Most of the remainder of the sound design is front centric in quality with dialogue well recorded and placed in the center channel and atmospheric effects restricted mostly to front channel placement.

Audio Commentary: director Jake Schreier and original author John Green provide a garrulous conversation about the film as it unfolds with no long pauses between comments between the two gentlemen.

Deleted Scenes (3:54, HD): four scenes may be watched individually or in montage and with or without director/producer commentary by Schreier and Green.

Van Acts (HD): original author John Green asks the cast a series of questions as he drives them around Charlotte, NC (which stands in for Orlando and New York in the film): their most memorable moments (1:04), the coming of age question (1:13), special road trips (1:15), their feelings about the van they’ve named Lurlene (1:02).

Promo Trailers (HD): The Maze Runner: The Scorch Trials, Me & Earl & the Dying Girl, The Fault in Our Stars.

Paper Towns is one of those films which will likely prove more special to teens and young twenties than it does to their more mature counterparts. While its themes of taking risks and pushing limits sound just bully on paper, the reality is sometimes a far different thing. The Blu-ray does offer a most pleasing audio and video experience for those so inclined.