The Maze Runner continues with its second installment in a trilogy of films with Wes Ball’s The Scorch Trials, a bigger if not necessarily better sequel to the events of the first film. With the same director and continuing core cast from the first movie, The Scorch Trials doesn’t want for action and some genuine thrills, but everything is laid on with a trowel, and the film is so heavy with shocks and tension that it wears itself out before it gets to the end. And even those who haven’t read the books can see certain plot turns from miles away. 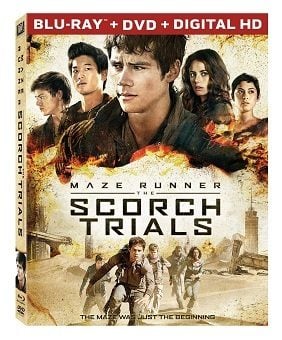 Having made their escape from the killer maze from the first movie, a group of Gladers led by Thomas (Dylan O'Brien) and including gal pal Teresa (Kaya Scodelario), Minho (Ki Hong Lee), Newt (Thomas Brodie-Sangster), Frypan (Dexter Darden), and Winston (Alexander Flores) find themselves along with many similar young escapees from other mazes in a safety bunker overseen by its commander Janson (Aidan Gillen). Each day, a select number of these young people are picked to be transported to a safe haven, but moody detainee Aris (Jacob Lofland) takes Thomas on a little tour of the facility via the ventilation system where they discover what appears to be hideous scientific experiments being carried out on the people who had been promised sanctuary. Gathering his friends together hurriedly (including Teresa who had already been selected for lab work on her), they manage to escape from the bunker into the Scorch, a desert-like area treacherous and life-threatening. Thomas had heard that a group called the Right Hand located in the mountains act as protectors for the chosen young people, and that’s where the group heads, but it’s a long journey there filled with toxic dangers at every turn, all the while Janson, who is part of the evil WCKD organization, pursues them relentlessly.

T.S. Nowlin’s script is based on the second book in James Dashner’s young adult franchise adventures, but he takes quite a long time to finally offer to an audience who may or may not have read the books an explanation of why exactly these teenagers are so valuable and who exactly is behind this massive charade to harness the life-saving nutrients they harbor? The story takes the young people through a horrific set of challenges well helmed by director Wes Ball, much broader and more horrifying than the mazes they had to traverse in the first entry: twice the group comes into contact with the hideous Cranks, a zombie-like army of beings whose single bite can rapidly infect the people they ingest, and the action scenes as the group races to escape fates worth than death (not all of them make it) can be gripping initially but rapidly overstay and become repetitious (a cracking window pane suspense sequence steals rather shamefully from Steven Spielberg). Filmed in New Mexico, the movie offers the arid desert patches that are quite overpowering in their vast bleakness, and the production designer has done a stupendous job transforming areas of Albuquerque to look like an enormous ruined city of the future which the young folks must traverse to reach some kind of sanctuary. Later scenes take place in yet another warehouse stronghold lorded over by the enigmatic Jorge (Giancarlo Esposito) and his right-hand gal Brenda (Rosa Salazar), another group of highwaymen out to use the young people as barter to get hopefully their own entry to safety from the Right Hand. But the threat of pursuit from the film’s real bad guys is always just a sequence away, and with their superior firepower and aerial capabilities, it’s never really much of a fight. Perhaps that’s why the ending of this entry is so unsatisfying. The film plays for over two hours, but by the end, most of the young people are basically back at square one looking for answers.

Dylan O'Brien continues to hold his own in the large cast as the plucky, never-say-die Thomas, but the script lets him down by keeping him alternately smart and stupid, too trusting when every fiber of his being should be screaming alarm bells around certain characters and with certain situations. The other members of his squad don’t register as strongly here as they did in the first film (again, the script doesn’t offer much character development for the actors) with Kaya Scodelario’s Teresa particularly disappointing. Better are Giancarlo Esposito and Rosa Salazar who bring some wry humor and surprise to their parts, and Aidan Gillen makes a great villain, a smiling cobra always ready to strike. Late in the film, the young gang take refuge with more soldiers led by Barry Pepper’s Vince and Lili Taylor’s Mary, both excellent actors doing much with little. Alan Tudyk has a ball with his cameo of a drunken disco owner who has a few secrets up his sleeve.

The film’s original theatrical aspect ratio of 2.40:1 is faithfully reproduced in this 1080p transfer using the AVC codec. Sharpness is very good throughout despite the enormous amount of CGI background work needed to make this futuristic world come to life. Color is good, too, with realistic skin tones. Black levels aren’t always the darkest, but they can occasionally reach impressive depths with better than average shadow detail to go along with them. Contrast has been consistently maintained. The movie has been divided into 30 chapters.

The DTS-HD Master Audio 7.1 sound mix does a very impressive job with the elaborate sound design needed to pull off this kind of apocalyptic tale. There are plenty of split effects and some effective pans through the soundstage as vehicles and aircraft whoosh through the frame, and John Paesano’s driving music gets a great spread through the fronts and rears. Dialogue is mostly relegated to the center channel, but there are occasional background voices that are piped into other available surround channels expanding the soundfield significantly.

Audio Commentary: director Wes Ball, screenwriter T.S. Nowlin, producer Joe Hartwick Jr., and film editor Don Zimmerman take part. They carry on an engaging conversation as each scene comes up though occasionally they do talk over one another in their enthusiasm for the project. They admit the commentary was recorded before the film’s premiere so they weren’t aware at the time of its impending disappointing box-office performance.

Janson’s Report (4:57, HD): a series of character confessionals collected into a brief vignette which offers some background on the story and events of the plot.

Deleted/Extended Scenes (17:58, HD): fourteen scenes may be watched together or separately and with or without commentary by Ball, Nowlin, Hartwick, and Zimmerman.

Visual Effects Breakdowns (1:06, HD): two scenes showing the layering of special effects onto the original photography and with optional commentary by Wes Ball.

Visual Effects Reel (29:55, HD): eight sequences showing before and after shots with the effects often using split-screen. They may also be watched separately.

Theatrical Trailers (4:05, HD): two trailers may be watched together or separately.

The Scorch Trials isn’t quite as much fun as the original The Maze Runner, but those caught up in the story from the first film will undoubtedly want to continue the journey with Thomas and his friends. The Blu-ray certainly offers an outstanding visual and auditory experience and many hours of commentary and bonus features to enhance the viewing experience.

I saw it here in BARCO, a pseudo-Cinerama system using 3 split screens to create a very wide picture.