Sam Favate said:
You’re the first person I’ve heard say he doesn’t like the title music. To each his own, of course, but I love the way it evokes Ennio Morricone’s music from The Good, The Bad and the Ugly. This episode had more than a little in common with that film and its predecessors.
Click to expand...

I think the music is good and fits the show but I still find it an odd choice for Star Wars. That being said, it's probably the best move to give the show its own 'musical personality' away from the movies and John Williams.

The music is great and fits the pace of the story perfectly. A John Williams-esque score wouldn't work at all.

Clinton McClure said:
Gamorreans in this episode looked like guys in green spandex wearing rubber masks, not Gamorreans as we know them from Return of the Jedi.
Click to expand...

Thats exactly how I remember them from ROTJ.
Last edited: Nov 1, 2020

If I remember correctly, fans were still finding a few pieces of the 'spine' in the dune about 20 years later. I'm sure the skull went home though.

The season 2 premiere of The Mandalorian, “The Marshall,” saw Mando returning once again to Tatooine, where he teamed up with Timothy Olyphant’s Sexy Beard In Second Hand Boba Fet…

My favorite Easter egg was the backpack rocket. Turns out it's more than just a choking hazard. 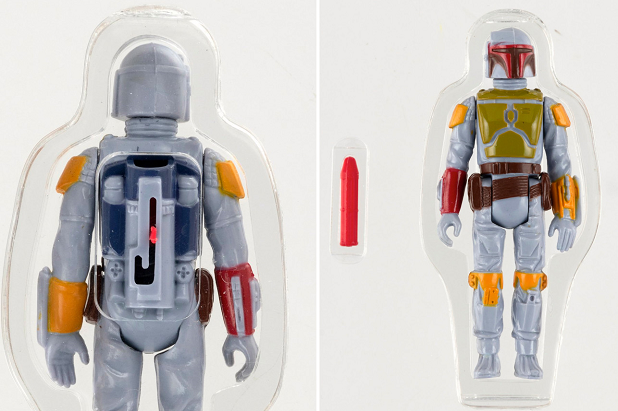 Considered the Holy Grail of "Star Wars" memorabilia, a rare Boba Fett action figure up for auction could fetch a record amount.

The Diplodocus skeleton from the 1975 Disney comedy One of Our Dinosaurs Is Missing
Click to expand...

...Now, THAT, I would re-subscribe to Disney+ to watch.

I'm calling it now, there's going to be a backlash, maybe by the end of the season, that's going to make Disney rethink their recent "We're putting all our eggs in Disney+'s basket!" announcement, doing a goalpost-dance over Mandalorian's trending.
The fan grumbling about why we're no longer getting any vintage Disney content between the Star Wars, the National Geographic, and the behind-the-scenes self-promotional navel-gazing series, has been steadily growing, and the pot's going to boil over soon.

I'm starting to be reminded of the time late-90's/early-00's Disney was crowing over their ABC-TV ratings after the trending success of "Who Wants to Be a Millionaire?", and Michael Eisner struck while the iron was hot by letting the next season air Millionaire seven nights a week.
Things ultimately did NOT end well for Millionaire, ABC, or Eisner. The only thing worse than killing the golden goose is mercilessly strangling it.

As for the Child & the Mandalorian (to give the show proper billing), I remember looking up the Japanese "Lone Wolf & Cub" movies on HBOMax's Criterion collection--Maybe I should go back and look at them again before watching this show, as preparation.

Amusingly, the Aurebesh text at the bottom of the hologram they're watching says "Little does Luke know that the Galactic Empire has secretly begun construction on a new armored space station even more powerful than the first dreaded Death Star." That's from the opening crawl of Return Of The Jedi. Aurebesh almost always has some meaning when it's seen but I don't remember them using it for an in-joke.

As it turns out, the Aurebesh text seen during the flashback scene in The Mandalorian Chpater 9 wasn't just a bunch of scribbles meant to fill in the frame — one viewer translated the writing and found a fun little Easter egg that also happens to open up a plot hole.

I don’t think the author of that article understands what “plot hole” means.

Josh Steinberg said:
I don’t think the author of that article understands what “plot hole” means.
Click to expand...

I didn't even read the full article other than to see about the Aurebesh 'joke'. However, my favorite is when someone says there is a plot hole because a character did something the person considers dumb. I assume they are constantly disappointed when they look at the behavior of everyday people in the real world who are constantly making dumb decisions.

They’re saying it’s a plot hole because the text says Luke doesn’t know about the second Death Star right as they’re showing a clip of the battle. Sigh...

Liked the 2nd episode but not as much as the first one this season. Does anyone else think that Dave Filoni should have gotten co-starring credit for this episode?

Can someone tell me where in that first episode that Boba Fett appeared?

At the end of the previous episode.

I feel bad but I kept laughing at The Child eating the poor frog lady's few remaining eggs.

TravisR said:
I feel bad but I kept laughing at The Child eating the poor frog lady's few remaining eggs.
Click to expand...

Man, that was all kinds of messed up!

Do better next time!

TonyD said:
At the end of the previous episode.
Click to expand...

I reviewed the end before posting and I didn’t see him. Can you be very specific? Wait a minute, it’s not the guy standing on the ridge back facing the viewer and then turns to face the viewer? If so, how do we know that’s BF?
You must log in or register to reply here.