The Good Lie dramatizes the experiences of a group of child refugees orphaned and driven from their homes in South Sudan by the civil war in 1983. While the movie's promotional material prominently features actress Reese Witherspoon (who gives an outstanding performance), the focus of the movie remains squarely on a group of lesser known and first time actors of Sudanese descent who convincingly play the Sudanese "Lost Boys" over a span of almost two decades. 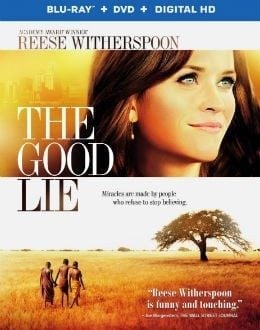 The Good Lie examines the plight of a group of "Lost Boys" driven from their homes in South Sudan by a civil war in the early 80s. The first third of the film follows a group of five children forced to flee their homes when their parents are slaughtered by soldiers. They trek hundreds of miles while trying to avoid being captured or killed seeking refuge in Ethiopia, only to be turned away and forced on another trek of several hundreds of miles to Kenya. Along the way, they meet children from other tribes and suffer a major casualty. The film then cuts eighteen years in the future to find the adult Mamere (Oceng), Jeremiah (Duany), Paul (Jal), and Mamere's sister Abital (Wiel) still living in the Kenyan refugee camp They learn that they will have the chance to relocate to the United States courtesy of sponsorship by American humanitarian organizations. A bureaucratic snafu results in Abital being sent to a family in Boston and separated from her brother and fellow tribesmen who are sent to live in Kansas City. With help from American case worker Carrie (Witherspoon) and her supervisor Jack, Mamere, Jeremiah, and Paul struggle to adjust life in the United States, rise above their personal trauma, and reunite their family.

Director Philippe Falardeau does an outstanding job of balancing the tone of the film, mixing elements of violence, pathos, sentiment, and fish out of water humor along with actors of widely varying levels of experience without ever striking a false, preachy or cliched note. Hollywood has a tendency to pour the sentiment on thick when it comes to inspirational stories, but The Good Lie is an example of admirable restraint. There are numerous points throughout the film where viewers familiar with other Hollywood dramatizations of tragic historical events will likely be telling themselves "so this is where the movie is going", only to be pleasantly surprised when their expectations are exceeded.

The focus of the movie remains squarely on authentically representing the experiences of the Sudanese refugees. When necessary plot contrivances provide the film its dramatic momentum, they never get in the way of the characters at the film's heart and the significance of the recent historical events at the film's center. The feeling of verisimilitude is enhance by the casting of several actors of Sudanese descent in key roles in the film. Reese Witherspoon and Corey Stoll give solid and ego-free performances in what amount to supporting roles.

The film is presented in a 16:9 aspect ratio that approximates its original theatrical aspect ratio of 1.85:1. The 1080p AVC encoded presentation renders the film's digital cinematography beautifully. Clarity and resolution are stellar throughout. While the scenes set in Africa look distinctly different than those set in the United States, director Philippe Falardeau and Cinematographer Ronald Plante eschew heavy filtering or image manipulation for a subtly pleasing effect.

The film's 5.1 audio mix is presented via a lossless DTS-HD MA track that shows a surprising amount of punch and immersion for a dialog heavy drama. The early scenes depicting the chilling and harrowing events of the civil war in South Sudan are the most engaging and dynamic. During the quieter, more dramatic scenes in the films final two-thirds, the musical score is the primary beneficiary of the lossless encoding. Alternate Dolby Digital 5.1 language tracks are presented in French and Spanish.

When the disc is first played ,the viewer is greeted with the following set of skippable promos:Proper extras accessible from the disc's Special Features menu include a modestly informative featurette and a generous collection of deleted scenes.

The Good Lie is a refreshingly low key inspirational drama inspired by the Lost Boys orphaned by the Sudanese civil war of the early 80s that deftly mixes heart and humor. The filmmakers and cast exhibit admirable restraint and dedication to their characters and historical basis. It is presented on Blu-ray with near reference quality audio and video and a modest pair of special features.