It was inevitable that American International would produce a sequel to the very successful Dr. Goldfoot and the Bikini Machine, but very few could have imagined that they would come up with the dud that is Dr. Goldfoot and the Girl Bombs. The budget was slashed and the production moved to Italy as a co-production to save even more money, the result is a mess of a film that is often hard to watch. 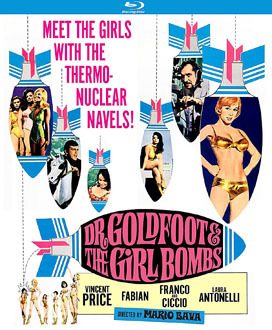 Dr. Goldfoot (Vincent Price) returns to hatch yet another plot to take over the world - this time turning his bikini-clad robots into walking bombs, seducing (and blowing up) the world’s top military leaders in the hopes of pitting the US and USSR against one another in all out war. Hot on his trail this time out is SIC agent Bill Dexter (Fabian), aided by two bumbling hotel doormen (Franco Franchi and Ciccio Ingrassia), and Rosanna (Laura Antonelli), whom Goldfoot has made a duplicate of.

As I stated in my teaser above, the film is a mess, but you can’t really blame the director (Mario Bava) who was simply fulfilling a contractual obligation (and going through some other personal matters during production), Vincent Price who was also fulfilling a contract with AIP, or his co-star Fabian (also a contract player at AIP). Much of the fault lies in the screenplay which was originally a Franco and Ciccio vehicle, until it was co-financed by Italy’s film industry and American International, who insisted that it be a sequel to Dr. Goldfoot and the Bikini Machine instead. Franco and Ciccio were Italian comedians, popular in rural areas of the country, and had a great deal of box office draw in their native land, yet virtually unknown outside. As David Del Valle and David DeCoteau note in their commentary, the comedians are often grotesque and unfunny to American audiences, even by today’s standards, and literally stop the film whenever they appear on screen. The plot is often overstuffed and convoluted, and with a few exceptions (such as the wonderful production design one would expect in a Mario Bava film), the movie is painfully unwatchable.

Kino’s Blu-ray presentation comes from a decent 1080p transfer using the AVC codec, retaining the film’s original 1.855:1 theatrical aspect ratio. Viewers should not be scared off by the poor quality of the opening credit sequence, which appears to have been rear projected onto the title cards, with its heavily degraded and grainy image. Things improve once the credits are over, although some process shots later on suffer a similar fate. Colors are consistent and not oversaturated, with realistic flesh tones. Contrast is good, providing decent black levels with whites that never clip. Detail, for the most part, is also good, with a few optically processed shots appearing much softer. The print is in relatively good shape, with only some minor specks of dirt here and there.

The DTS HD Master Audio 2.0 mono track serves its purpose, providing clear (and very obviously dubbed) dialogue throughout and a nice dynamic range for the music and effects elements, with hiss and distortion at a minimum.

Audio Commentary with David Del Valle and David DeCoteau: Del Valle of SinisterImage.com and DeCoteau of RapidHeart.tv continue their discussion from the first film in the series, discussing many of the problems with the film and how they feel this really isn’t a Mario Bava film, despite the few obvious touches here and there.

Animated Montage of Images (1080p; 1:14): A collection of posters and promotional stills.

The release is more for completists for Vincent Price and/or Mario Bava fans, although the commentary track makes the film a bit more palatable. Kino should be commended for trying to add some value to what many consider the worst films of these two movie icons careers.