Pitfall is a long-neglected film noir which was rescued by the UCLA Film & Television Archive and has been brought to Blu-ray by Kino Lorber. The transfer is not perfect, but considering that the original elements are not known to exist, this is probably as good as this excellent film is ever going to look and sound. 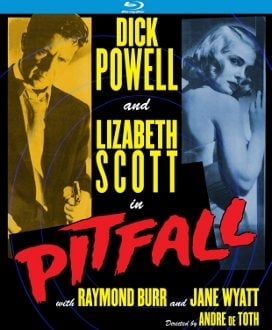 If you were a nice guy you'd cry a little bit with me. You'd really feel sorry for a girl whose first engagement ring was bought by a man stupid enough to embezzle and stupid enough to get caught. - Mona Stevens

John Forbes (Dick Powell) is an insurance man for Olympic Mutual Insurance Company in Los Angeles. He lives in a new, mostly treeless suburban neighborhood with his pretty wife, Sue (Jane Wyatt), and their son. One might expect that three years after the end of World War II he would be content to have a nice home and family, but from the opening scene it is apparent that he is restless. As Sue drives him to work she asks, "Old man routine getting you down again?"

When Forbes arrives at work he finds that MacDonald (Raymond Burr), a hulking, menacing-looking private investigator, is waiting for him. MacDonald has been working on the Smiley embezzlement case, and he has located $4,000 in assets which rightly belong to the insurance company. It seems that Olympic Mutual had issued a bond to cover Smiley and had to pay up when he embezzled $10,000. MacDonald learned that Smiley spent much of the money on gifts for a woman named Mona Stevens (Lizabeth Scott). "Did you talk to her?" asks Forbes. "Yeah," MacDonald responds, "when I wasn't busy looking at her."

Forbes tells MacDonald that his work is done and that the company will handle further contacts with Mona Stevens. That afternoon the insurance man takes a company car and drives out to her apartment to speak with her. When he arrives she is not home, but her door is unlocked and he lets himself in (a scenario which is unthinkable today but which may have been plausible in 1948). He glances around the apartment and finds a portfolio of modeling photos on the table. As he is browsing through the photos the sultry Mona arrives, carrying two bags of groceries. In a matter-of-fact way Forbes explains that he is there to recover the gifts which Smiley bought for her - among them a fur coat, dresses, and a diamond engagement ring.

"That was quite a boy you sent to see me yesterday," Mona complains. "I've met some weird ones in my life, but that one nearly scared me to death." When she reproaches Forbes for his uncaring attitude about appropriating her things, he is taken aback and offers to buy her a drink. Before they can leave she mentions that Smiley also bought her a motorboat, so they drive out to the Santa Monica pier to check it out. After Forbes suggests that they take the boat out for a ride, he smiles for the first time that day. Later, while they are having drinks together, Mona asks "Do you have to be someplace for dinner?" "No," Forbes lies. "I don't have to be anywhere." Obviously, he has not told Mona that he is married. When Forbes eventually leaves her apartment at 11:30 p.m., he is unaware of the fact that MacDonald, who has become obsessed with Mona, has been watching them all evening.

Pitfall contains many of the elements that we expect to see in film noir, including a femme fatale who throws a monkey wrench into the protagonist's life, albeit unintentionally in this case. It also is an interesting early look of a seemingly idyllic life which is actually stifled in the 9-5 corporate world of postwar America. Dick Powell, who had already established himself in film noir with such movies as Cornered, Johnny O'Clock, and Murder, My Sweet, is excellent as a man who finds it difficult to extricate himself from a messy situation. Lizabeth Scott is seductive and smart, but also very vulnerable as a woman who is just looking for a man to be nice to her. Jane Wyatt turns in a fine performance as a wife who is considerably more level-headed than her husband, and Raymond Burr is positively frightening as the malevolent private investigator. The film is capably directed by Andre De Toth.

Pitfall was the first film to be produced by Regal Films, which was jointly owned by Dick Powell, Sam Bischoff and Edward Gross. Powell also starred in Regal's second production, Mrs. Mike.

Although the picture quality of this Blu-ray of Pitfall is slightly problematic in a few scenes, it is mostly a pleasure to watch. There is some momentary damage her and there, including one scene where it appears that a frame or two had to be removed, but considering that the original elements seem to have been lost this release is more than satisfactory. The evocative cinematography by Harry J. Wild makes good use of locations in and around Los Angeles. If, like me, you enjoy seeing how old filming locations appear today, use Google Street View and check out 5424 Bradna Drive in Los Angeles (Windsor Hills). This is where Forbes and his wife leave home on his way to work. There are more trees in the neighborhood today.

Our resident expert, Robert A. Harris, has weighed in on this Blu-ray of Pitfall and readers are encouraged to see what he has to say.

The DTS HD-MA 2.0 mono soundtrack is nothing special but is adequate. All of the dialogue is clear and understandable, although there is a momentary lip synch issue in the scene where it appears that a couple of frames of film are missing. Some hiss is noticeable at times but the audio is free of distortion.

The primary extra is a new, excellent commentary track by Eddie Muller, founder and president of The Film Noir Foundation. He discusses the history of Regal Films and provides some very good insights into the performances of the actors and Andre De Toth's direction. He also identifies some of the Los Angeles area locations.

Also included are trailers for He Ran All the Way and A Bullet for Joey.

Pitfall is an intriguing film noir which belongs in the library of every aficionado of the genre. Thankfully the UCLA Film & Television Archive has preserved a reasonably good print of the film and Kino Lorber is to be commended for giving this as good a Blu-ray transfer as possible, under the circumstances.

I agree for the most part with your review. I definite purchase for any film noir aficionado.
You must log in or register to reply here.

Film Noir: The Dark Side of Cinema VIII -Blu-ray Review