Back to the Jurassic 3D Blu-ray Review

An outstanding cast of voice actors isn’t quite enough compensation to lift the children's adventure movie Back to the Jurassic beyond the mundane. Pre-teens will likely be entertained by the time travel adventure of a mischievous kid and his best friend and annoying sister, but others won’t find the animation all that engaging, and the 3D offered is definitely not on the lists of pluses for the film. It’s innocuous entertainment for the small fry, and that’s about it. 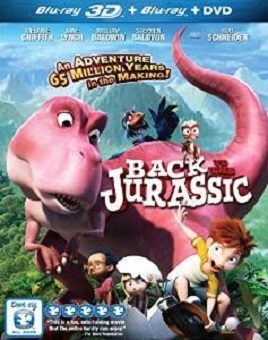 Grounded by his mom (Jane Lynch) for weeks after getting into trouble at a local natural history museum, Ernie (Pamela Adlon), best friend Max (Yuri Lowenthal), and Ernie’s tattletale sister Julia (Tara Strong) accidentally fire up Max’s father’s (Fred Tatascoire) dysfunctional time machine by spilling soda on its wiring and are launched back to Ernie’s favorite past time period – the Cretaceous era where dinosaurs abound. Because the time machine is shaped like a large egg, T-Rex mother Tyra (Melanie Griffith) mistakes the three emerging children for her own offspring and takes pains to protect them and prohibit their movements, for Ernie yet another mother who’s standing in the way of his fun. But there are a pair of Sarcosuchus creatures (William Baldwin, Stephen Baldwin) who will stop at nothing to kill Tyra and her offspring, and when Ernie loses a necessary bit of wiring for the time machine, it looks like they’re going to be trapped in the past with all of its dangers and pitfalls to be endured.

The screenplay by Adam Beechan, Jae Woo Park, Zack Rosenblatt, and James Greco doesn’t always hold together well in story or characterization, but it furnishes a decent frame for the adventures of these three youngsters maneuvering through the perils of the prehistoric era with only momentary problems to navigate. To maintain the interest of its obviously targeted young audience, there are extended adventures in the rapids, the tar pits, and with an earthquake before the story comes to an end, there are the requisite fart and belch jokes spread throughout, there are enough creepy stalking scenes featuring the vile villains (and their comically screwball henchmen/vultures) to keep young attention spans riveted, and the climactic fight scene between the massive creatures.(who appear to be giant crocodiles) and the T-Rex which the film has building toward for its entire length offers enough ebb and flow between heroine Tyra and rogues Sarco and Sully to make its overlength worth it for the small fry. But things work out just a bit too neatly and cleanly for the characters, the youngest of whom don’t seem to have learned any lessons about obedience and the older characters who come to think they’ve been too controlling and overprotective of children who, to be honest, do seem to need a firm hand.

The voice actors, however, do excellent work for the most part. Melanie Griffith gets top billing as Tyra, but she’s a little more strident and a bit less impressive than either Jane Lynch or Fred Tatascoire who play the human parents. The Baldwin brothers make for very scary and utterly sinister monsters on the prowl, and their characters are by far the best animated characters in the piece. Rob Schneider has a field day as the affable Dodger, an imitative creature and foster brother to the children who actually comes to save the day for all concerned. And the children’s voices are all completely believable: Pamela Adlon, Yuri Lowenthal, and Tara Strong.

The movie is presented in 1.85:1 and is offered in 1080p using the MVC (for 3D)/AVC (for 2D) codec. Though the animation itself certainly isn’t up to the standards of big-time Hollywood studio animation departments (just look at the unmoving hair of the kids to see one example of how corners have been cut), there is nothing wrong at all with the presentation with sharpness outstanding and detail offering as much as the animators have put into the work. Colors are bright and bold but are never oversaturated, and there is no banding or other artifacts to spoil the pristine picture quality. The film has been divided into 12 chapters.

The 3D, however, is a mixed blessing. There is an adequate amount of depth in the picture though the more elaborate animated work seen in Disney, DreamWorks, and Pixar films also extends to the amount of depth portrayed in their images making the mediocre levels of depth here rather obvious. 3D isn’t being used here to enhance much of the storytelling with numerous possibilities for forward projection (the fangs and tusks and tails of the creatures, rocks shooting off in all directions during the earthquake sequence) and immersive involvement of the viewer pretty much ignored.

The Dolby TrueHD 5.1 sound mix is very immersive with terrific directionalized dialogue used throughout and many examples of split sound effects panning across and through the soundstage during the presentation. Bass also has a nice presence. Stephen Barton’s music likewise gets a fine representation through the fronts and rears. But occasionally, especially in the early portions of the movie, dialogue gets a trifle overpowered by effects and music.

Families looking for an appropriate age adventure for their pre-teens will likely find just what they’re looking for with Back to the Jurassic. Be advised, however, that the 3D is extremely mediocre and that there is more fun to be found in the animation offerings from the major studios who often go out of their way to instill in their films entertainment value for all members of the family and not just the youngest ones.