Leon: The Professional, which was previously released as an exceptional Blu-ray in 2009, has now been released by Sony in remastered 4K and with Dolby Atmos audio (which defaults to Dolby TrueHD 7.1 for those who do not have Atmos). This is a beautiful Blu-ray, but replacing the earlier Blu-ray may not make much sense unless you have the equipment to display and hear the upgraded video and audio. 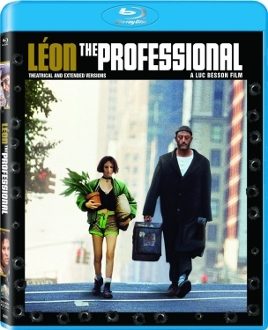 Video Resolution and Encode: Not Listed

Is life always this hard, or is it just when you’re a kid?

Leon: The Professional is a remarkable film which paradoxically is both incredibly implausible and chillingly realistic. Leon (Jean Reno) is a loner hit man who lives in a squalid New York City apartment building. He strikes up a casual friendship with Mathilda (Natalie Portman), a young girl aged 12 or so who lives down the hall with an abusive father (Michael Badalucco) and the rest of her dysfunctional family. It seems that some drug dealers have been using the family’s apartment to store a large quantity of cocaine, but when they take delivery they discover that some is missing. Mathilda’s father, of course, has skimmed off some of the merchandise for himself. When he fails to acknowledge what he has done, the bad guys, led by Stansfield (Gary Oldman), come after him and his family.

Mathilda is fortuitously spared from the ensuing bloodbath because she has been sent to the grocery store to pick up some food. Leon, who is home at the time, sees some of the mayhem through his peephole, but this is not his affair so he stays out of it. Then Mathilda returns to the building, and as she walks down the hallway to her apartment she realizes what has occurred. While the place is being ransacked by the killers, she walks on by to Leon’s apartment and pretends that she lives there. After several moments of hesitation, Leon opens the door for her and their lives become inextricably intertwined.

Mathilda may only be 12, but she has led a rough life and has become tough as nails. At one point she inquires of Leon, “Is life always this hard, or is it just when you’re a kid?” She asks the question matter-of-factly, not in a plaintive “Is that all there is?” sort of way. She isn’t looking for pity, she is looking for answers. And she decides that she wants revenge – not for her father, whom she despised, but for her younger brother, who was her only friend. Leon has saved her life, and she convinces him that the act of saving her has obligated him to look after her. She persuades Leon not only to let her live with him, but to teach her the basics of his profession.

The idea of a middle-aged hit man (or “cleaner,” as Leon euphemistically refers to himself) taking in and becoming the mentor of a girl who has barely reached puberty is so far-fetched that it would laughable but for the astonishing performances of Reno and Portman. Leon is a remarkably skilled killer, but his emotional development is barely equal to that of Mathilda. She, in turn, soon realizes that she actually has the upper hand in the relationship and she learns how to pretty much always get her way. Gary Oldman is equally effective as Stansfield, the cold-blooded and menacing drug dealer who actually turns out to be worse than he first seems to be.

Director Luc Besson expertly crafted a number of exceptionally violent and realistic action scenes for this movie, some of the best which I have ever seen.

This film created considerable controversy because of the sexual overtones present in the relationship between Leon and Mathilda. She falls in love with him, but he resists – perhaps because he knows it would be wrong, or perhaps because he has been warned by his mob employer, Tony (Danny Aiello), that an attachment to a woman of any age can be ruinous to a hit man. 24 minutes of footage (none of which is even remotely explicit) was cut for the American release after audiences responded negatively to scenes in which Mathilda frankly expresses her desire to have her first sexual experience with Leon. European audiences were more accepting of the concept of a very young girl falling in love with a middle-aged man (Maïwenn Le Besco, who has a small role in the film, was just 15 years old when she fell in love with director Besson, who was 32 at the time). The 109-minute version of the film was released as The Professional in America and the longer version was later released as Leon: Version Integrale in Europe. Here both versions are available as Leon: The Professional.

I found the film to be exceptionally involving, and the action scenes are truly thrilling. It also contains a surprising amount of humor. The real star of Leon: The Professional is Portman, as the story could not have been successfully pulled off without her brilliant performance. Portman's Mathilda is streetwise and smart, but also extremely vulnerable. She has some of the best dialogue in the film, and she delivers her lines with passion and authenticity. Those who may be concerned about the creepiness factor may want to stick with the shorter version of the film.

The 2009 1080p Blu-ray widescreen transfer is outstanding. The picture is sharp and highly detailed, colors are perfect, and an appropriate level of film grain has been retained. The action is greatly enhanced by the fact that most of the filming was done on location in New York City.

Of course, image-wise the real hook here is that this Blu-ray has been remastered in 4K. Robert A. Harris has viewed it and calls it a "perfectly film-like image, with pure grain, great blacks, shadow detail, and a highly resolved, perfectly color timed image." He also reported some issues when using his Sony projector to up-rez the picture, problems which went away when he allowed his Oppo 103 to do the work. For those who have the ability to view this Blu-ray in 4K, I recommend that you read his review:

On a 1080p flat screen, the difference in picture quality compared to the 2009 Blu-ray is more subtle. The older Blu-ray is excellent, but the remastered version appears to be a bit sharper and overall slightly more pleasing.

The 2009 Blu-ray features an excellent uncompressed 5.1 DTS-HD MA soundtrack. The dialogue is crystal-clear and understandable throughout. The action scenes are punctuated with jarring explosions and enhanced by effective use of the surround channels.

The new Blu-ray features Dolby Atmos, which I do not have the ability to review, so Adam Gregorich will add his thoughts on the audio to this review. For those who are not Dolby Atmos-enabled, the audio will automatically default to English Dolby TrueHD 7.1 unless you choose one of the foreign language options. The Dolgy TrueHD soundtrack is totally immersive and is at least as good the DTS-HD MA soundtrack on the 2009 Blu-ray. Those who have either Dolby Atmos or a 7.1 setup will undoubtedly prefer the new Blu-ray.

Dolby Atmos: I listened to Leon on a 7.2.4 system (4 overhead speakers). The mix made use of the height channels with both music and some effects. The scene where Mathilda (Natalie Portman) is confronted by Stansfield (Gary Oldman) is an interesting example of how Dolby Atmos can be used to help push an emotion. The way the music was coming from all around, including overhead made the room feel very confining, much like Mathilda felt trapped by Stansfield. - Adam Gregorich

The extras on this Blu-ray release have been ported over from the deluxe edition DVD which was released early in 2005 and are identical to the special features which appear on the 2009 Blu-ray. They include three featurettes:

“10 Year Retrospective: Cast and Crew Look Back” is not a cast reunion, but it includes interviews which were done in 2004 at various locations with many of the members of the cast and crew.

“Jean Reno: The Road to Leon” explores the actor’s life and career.

“Natalie Portman: Starting Young” includes her reminiscences about how she got the role, the part her parents played in making sure that all of her scenes were done in good taste, and how starting her career with such an important role in a film for mature audiences helped her to avoid some of the pitfalls which other child actors have fallen victim to.

“Fast Track” is a feature which can be activated only while watching the extended version of the film. Throughout the film information about the actors, the sets, and tidbits about New York City appear in subtitles. I skimmed through it and was pleasantly surprised to discover that some of the information is rather substantive.

My only caveat about Leon: The Professional is that some viewers may find the relationship between Leon and Mathilda to be a bit creepy. I was not put off in the least; on the contrary, I felt that it was handled with exceptional restraint and taste. While the friendship between the two principal characters is the center of the film, the action scenes are spectacular and the performances of the supporting actors (particularly Gary Oldman) are first-rate.

Readers who own the 2009 Blu-ray and who have the equipment to view 4K and/or have Dolby Atmos or 7.1 audio will want to upgrade to this new Blu-ray. For those of us who will be viewing Leon: The Professional in 1080p and 5.1 audio, the differences are not enough for me to recommend an upgrade. However, if you do not already own this film on Blu-ray, the 2015 version is the way to go.

Thanks Rich! I added my thoughts on the Atmos mix.

Politely disagree regarding the 2009 BD. The new disc makes the old disc an eye sore

willyTass said:
Politely disagree regarding the 2009 BD. The new disc makes the old disc an eye sore
Click to expand...

I concur. Even on my 58" screen, the new disc is an obvious improvement over what had seemed like an excellent Blu-Ray.
You must log in or register to reply here.