The Crooked Way is an intriguing 1949 film noir from United Artists which features an attractive cast and exceptional black & white cinematography by the great John Alton. While this new Blu-ray by Kino Lorber is a major improvement over the Geneon DVD which was released in 2005, recurrent film damage which has not been cleaned up prevents it from being a stellar release. 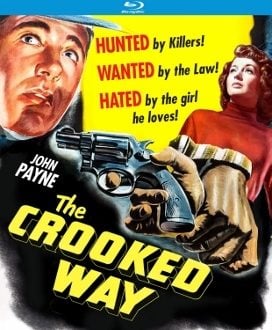 Eddie Reid (John Payne) is a decorated World War II veteran who is being treated for amnesia at a U.S. Army hospital in San Francisco. His doctor explains that a piece of shrapnel which pierced his brain cannot be removed and it prevents him from remembering anything about his pre-Army life. Army records show that Eddie enlisted in Los Angeles, and since there is nothing further that can be done medically the doctor suggests that he go to Los Angeles and see if the can find any friends or relatives who can help him unravel his past.

When Eddie's train arrives at Union Station in L.A. he is immediately recognized by two police officers, Lt. Williams (Rhys Williams) and Sgt. Barrett (John Doucette), who immediately question him about why he has come own. Eddie has no idea what they are talking about, but he plays along. He learns that his real name is Eddie Riccardi and he has a criminal record. The police suspect that he is planning on reuniting with his old partners in crime and they take him to police headquarters to question him. Eddie shows them his discharge papers and medal, but they do not believe him. He is strongly advised to get out of town.

While Eddie is being grilled by the police, across the street at a bail bonds office the lovely Nina Martin (Ellen Drew) is delivering money to get a small-time crook named Petey (Percy Helton) sprung from jail. When she looks out the window she can scarcely believe that it is Eddie who is standing on the sidewalk. She walks over to talk to him, but she does not realize that he has no idea who she is. She drives him to a hotel, but while he is putting his things in his room she gets on a pay phone and calls her boss, gangster Vince Alexander (Sonny Tufts), to report that Eddie Riccardi is in town. It turns out that Vince has a grudge against Eddie, but when they come face to face Eddie has no recollection of him and knows nothing about why Vince is angry with him.

Vince has his thugs work Eddie over and then gives him 24 hours to get out of Los Angeles, but Eddie is determined to stay until he can learn as much as possible about his past. When a witness who was going to testify against Vince turns up dead, the police wonder if Eddie had anything to do with it and Vince sees a way to get his revenge.

In 1949 John Payne was probably best-known for his performance as Kris Kringle's attorney in Miracle on 34th Street, but he was a versatile actor and his hard-bitten performance as Eddie led to roles in more film noir such as Kansas City Confidential and 99 River Street. Ellen Drew never made it into the top rung of actresses, but she appeared in films and television for 25 years before retiring at the age of 46. Nina, in The Crooked Way, is not your typical femme fatale. She is conflicted because she works for Vince and she also has reasons to despise Eddie, but she is forced to reconsider her feelings as she gradually realizes that Eddie Reid is a kinder version of Eddie Riccardi. Sonny Tufts had a checkered acting career which was derided by some, but here he makes a convincing heavy. Rhys Williams, John Doucette, and Percy Helton are familiar character actors who provide able support.

Directory Robert Florey keeps the action moving along at a brisk pace, but the real star is cinematographer John Alton (He Walked by Night, T-Men, The Big Combo, etc.), who does amazing things with shadows, lighting, and camera angles (check out the fabulous use of shadows during the scene in the bail bonds office). Apart from the amnesia angle The Crooked Way is a rather conventional crime drama, but Alton's camera work elevates it to the status of important film noir. The location filming in and around Los Angeles contributes greatly to the atmosphere.

The black & white image is framed at 1.33:1 and is presented in 1080p via the AVC codec. The opening credits look very good, with excellent sharpness and detail. Contrast are black levels are generally good and shadow detail is fine. Vertical reel damage is evident from time but is not particularly distracting. However, there are multiple frames which show horizontal damage and speckling. One instance at the 29:26 mark is bad enough that a line of Eddie's dialogue cannot be heard.

This is a shame, because with cleanup of the damaged frames The Crooked Way could have looked as good as Pitfall (coincidentally, in a scene outside of a movie theater a poster for Pitfall can be seen). This does not mean that you should avoid this Blu-ray, because there is much to enjoy, but know that you are not getting perfection.

The only audio option is English 2.0 DTS-HD MA mono. The dialogue is clear and understandable and is mostly free of distortion and noise. As noted, there is one scene in which film damage causes a line of dialogue to be obscured. The score by Louis Forbes has decent fidelity.

This is a bare-bones release with no extras other than trailers for A Bullet for Joey, He Ran All the Way, and Witness to Murder.

The film is divided into eight chapters.

This Blu-ray of The Crooked Way is disappointing because of the film damage, but unless someone decides to finance a cleanup this is likely the best version of the film we are going to see. Warts and all, fans and students of film noir will want to study it and enjoy John Alton's exceptional cinematography.

I've never seen this film and it sounds interesting. I'll probably buy this disc even though it comes from damaged elements. I've always liked John Payne and enjoyed John Alton's work. (Payne and Alton worked together on two color films with Rhonda Fleming, directed by Allan Dwan. Both should be available in high definition. Alton's work in color is something to see)

Couldn't agree more. I have seen this film, it's OK. I am also a big fan of John Payne, the two films you mention are Slightly Scarlet and Tennessee's Partner. Slightly Scarlet is my most wanted film to be released on blu-ray and it is 60 next year. Released by RKO and I assume now a Warner property. I am hoping that Panamint will release it (if they can) as they are fans of Rhonda Fleming.

I'll definitely pick this up at some point. Love film noir and John Payne. Thanks for the review!
You must log in or register to reply here.