The Agony and the Ecstasy Blu-ray Review

The on-going clash of wills between the fiery artist Michelangelo and the equally stubborn warrior Pope Julius II provides the focus of Carol Reed’s The Agony and the Ecstasy adapted from the best selling book by Irving Stone. There isn’t a lot of plot for a movie than runs over two hours, and the constant angry byplay between the two strong-willed men grows tiresome after a time, but the film is sometimes glorious to look at, and if the dramatic impetus sometimes stalls, at least director Reed knows what to do with his camera. 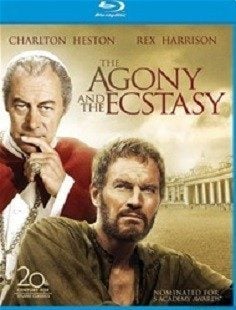 Busily working on the elaborate tomb and sculptures for Pope Julius II (Rex Harrison), Michelangelo (Charlton Heston) is taken off of that project and assigned to decorate the ceiling of the Pope’s favorite place of worship, the Sistine Chapel. At first commissioned to paint the twelve apostles and fill in empty spaces with anything which suits his fancy, the uncompromising artist quits the project and flees to the quarries after working a short time uninspired by the subject and basically disliking painting as opposed to sculpture. But the Pope is adamant that he complete his commission and when he begs his forgiveness after finally finding inspiration, he’s allowed to return and do what he wishes even though his estimate of six months to a year to complete the work is woefully shortsighted leading to more angry and bitter confrontations between the two as the pope, fighting holy wars to prevent Rome from being overrun, becomes convinced the work will never be finished.Adapted from the Irving Stone novel by Philip Dunne, the screenplay of this historical drama offers some surprises (especially for those who had no idea popes at one time were actual warrior soldiers who eagerly took up the fight for salvation – Rex Harrison’s colorful entrance is indeed an eye-opener) amid the noisy arguments and petty mind games the film’s two primary forces engage in. Director Carol Reed throws in a couple of battle scenes to spell all the arguing and stilted passages where we simply see Michelangelo on his back painting or his assistants mapping out his next piece of ceiling. The artist’s genius is certainly suggested as the script allows him to express in words and body language his frustrations, his inspirations, and his interpretations of what he is doing, but the man’s historically noted sexual orientation is slickly stepped around by inserting the presence of the Contessina de Medici (Diane Cilento) who makes romantic overtures to the artist and is continually turned down not by a lack of feeling but by his consuming passion for his work. All of their scenes together are obvious and often exasperating attempts to inject a female presence into a heavily male-dominated story (she even ludicrously serves as his nurse when months of close work and a lack of proper nutrition lead him to collapse) at the expense of allowing a fuller examination of all aspects of the man’s life (likely the Production Code in its gasping final years of control was partly to blame). But director Reed earns his supper when the camera inevitably tilts upward to show us the results of four long years of labor.Rex Harrison and Charlton Heston both do powerful jobs with the roles as written even if the continual running gag question and answer “When will it be finished?” “When it is finished!” wears out its welcome long before the film is completed. Diane Cilento rather circles around Michelangelo as a panther readying to pounce eyeing him hungrily in their every encounter, but Harry Andrews as the architect Bramante who’s busy with the basilica of St. Peter scores some impressive moments as does Tomas Milian as the young Raphael dangled in front of Michelangelo as his replacement if work on the frescoes isn’t completed in a more timely fashion.

The film’s Todd-AO theatrical aspect ratio of 2.20:1 is faithfully rendered in this colorful 1080p transfer using the AVC codec. Sharpness is simply superb throughout with the opening twelve and a half-minute Cinerama-like prologue showing examples of Michelangelo’s famous sculptures in dizzyingly detailed close-ups a wonder to behold with the various textures so realistic one could almost reach out and touch them. Color is richly presented (reds come through especially well) without ever threatening to go overboard, and flesh tones are natural throughout. Black levels are outstanding with excellent shadow detail. There is an occasional speck or two to be seen fleetingly and a curious bit of pulsating brightness in the scene where the artist is explaining his conception of Adam’s creation to the Pope. The film has been divided into 32 chapters.

The DTS-HD Master Audio 5.1 sound mix gets an outstanding spread across the front channels with only some occasional spillage into the rear channels and that mostly through the music by Alex North (main feature) and Jerry Goldsmith (the prologue). There is some directionalized dialogue across the front soundstage though most of it has been placed in the center channel and has been well recorded (though ADR in dubbing some of the voices is pretty noticeable). There are a couple of instances of impressive use of bass in the LFE channel, too.

Nominated for five Academy Awards for its lush cinematography, costumes, production design, music, and sound, The Agony and the Ecstasy is a mixed bag of historical drama. Though well acted, the pacing is uneven and the plot not sufficiently engaging for the length of its running time. Still, the Blu-ray can’t be much faulted for its presentation of this eye-filling spectacle.

I love this film so I think more of it than you have indicated in your review.

When I saw this picture in TODD-AO, I was so impressed by the prologue that everything went downhill from there. Not saying that the movie is not worth a shot, but the prologue stands on its own, and the works of art speak for themselves, and they are awe inspiring.
Rex Harrison is very entertaining as well, as is the obfuscation of the artist's sexuality via Diane Cilento's character. Quite amusing.
Don't shy away from this release.

But I need to wait until I can find it at a reasonable price. I just missed the FoxConnect sale by hours. I doubt I'll have to wait too long.

Robert Crawford said:
I love this film so I think more of it than you have indicated in your review.
Click to expand...

I really like this film as well and voted for it repeatedly during the poll. But I think it is a fair review. I think the movie is a tad bloated. But I love it nonetheless. I am not at all bothered by Michelangelo's sexuality being left out. It has been decades since I read the novel, but it was really just about Michelangelo's obsession with his work and it covered his entire career. He was really an antisocial loner who just wanted to sculpt. I think Cilento was added mainly because there would have been no women in the film otherwise. Her addition was also a way of mentioning that Michelangelo had basically been adopted by Lorenzo the Magnificent. I don't think it is mentioned in the credits, but I hear a lot of Gabrielli music on the soundtrack in addition to Alex North.

Fair and encompassing review of good but not great film that I will purchase in BD.

But I need to wait until I can find it at a reasonable price.
Click to expand...

When did $24.99 MSRP become an UNreasonable price?

Rick Thompson said:
When did $24.99 MSRP become an UNreasonable price?
Click to expand...

I just see this as a catalog title which I can be quite sure will be discounted quicker than you can say Jack Robinson.

Rick Thompson said:
When did $24.99 MSRP become an UNreasonable price?
Click to expand...

For many it is for a catalog title.
B

dvdbeaver states original aspect ratio as 2.19:1 and bluray AR as 2.35:1
Can anyone confirm the aspect ratio?

Wahoo, my order with this BD has shipped out from Fox Connect.

A fair review, Matt. I found the movie beautiful but feel it lives up to "The Agony and the Agony", which was either the Mad Magazine title for it or the headline of a review.

Of course, I can't NOT watch it when it's playing, so there's something about it that pleases me.

Virgoan said:
A fair review, Matt. I found the movie beautiful but feel it lives up to "The Agony and the Agony", which was either the Mad Magazine title for it or the headline of a review.
Click to expand...

It was Mad's title.

Blu_rayfan66 said:
dvdbeaver states original aspect ratio as 2.19:1 and bluray AR as 2.35:1
Can anyone confirm the aspect ratio?
Click to expand...

What, Matt's confirmation of 2.20:1 in the review of this very thread isn't good enough for you?
B

Mark-P said:
What, Matt's confirmation of 2.20:1 in the review of this very thread isn't good enough for you?
Click to expand...

Just curious and wanted to double check. I have a Philips Euro 21:9 aspect ratio display and picture info gets cut off top and bottom on AR 2.20:1 or narrower. Won't stop me picking this release up tho

Mike Frezon said:
I just see this as a catalog title which I can be quite sure will be discounted quicker than you can say Jack Robinson.
Click to expand...

I pre-ordered it during the FoxConnect sale for $8. It and some other titles shipped yesterday and they are due here on Tuesday.

Blu_rayfan66 said:
Just curious and wanted to double check. I have a Philips Euro 21:9 aspect ratio display and picture info gets cut off top and bottom on AR 2.20:1 or narrower. Won't stop me picking this release up tho
Click to expand...

Richard Gallagher said:
I pre-ordered it during the FoxConnect sale for $8. It and some other titles shipped yesterday and they are due here on Tuesday.
Click to expand...

Mike Frezon said:
But I need to wait until I can find it at a reasonable price. I just missed the FoxConnect sale by hours. I doubt I'll have to wait too long.
Click to expand...

I saw this movie in history class in high school. I have loved it ever since, and I introduced it to my family on Netflix one night. Strangely, I was the only one left watching it by the end.
You must log in or register to reply here.