Murder and mayhem rise to epic proportions in the seventh and final season of FX’s hit drama Sons of Anarchy. And yet despite all the bloodshed, there is also tenderness, comradeship, and connections that prove the writing to be more than just a string of visceral action sequences punctuated by violence. The show is not nor has it ever been for the faint-of-heart, but the drama is often electrifying, and those who have devoted six years of their lives to living with these one-of-a-kind characters couldn’t possibly miss finding out what happens to them during the program’s last hurrah. 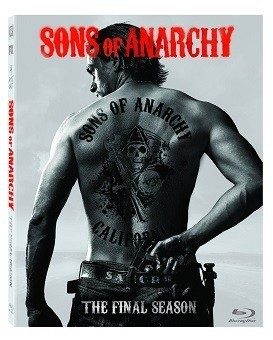 The event which drives almost all of the stories with their accompanying violence in the final season occurred in the season six finale: the murder of motorcycle club Sons of Anarchy president Jax Teller’s (Charlie Hunnam) wife Tara (Maggie Siff) by Jax’s mother Gemma (Katey Segal). Gemma’s act was committed due to a misunderstanding, but rather than explaining that to her son, she lies and says the murder was committed by one of the Sons’ harshest rivals, a Chinese gang member whom Gemma points out. Jax’s vendetta to avenge Tara’s murder has a domino effect on the club’s business and personal interests putting them at odds with other gangs and clubs (or as the Sons call them, “blacks, browns, yellows, and whites”) with which the Sons had previously had alliances, some firm and some shaky. Now, in the final season’s thirteen episodes, one crime begets dozens of others as some club favorites as well as some new faces in town go to meet their Maker, and Jax and the other members attempt to traverse a new feisty town sheriff (Annabeth Gish), the dedicated D.A. (CCH Pounder) who had been working with Tara to ease her family out of the crosshairs of criminal conviction, and a new face to the power structure of Charming, August Marks (Billy Brown).

But make no mistake, there is blood-curdling violence in every one of these thirteen episodes. Whether it be a fork through the brain, multiple eye gouges, finger removals, surprise explosions, bullets to the brain, or this season’s most popular pastime: sprays of automatic firepower that mow down rows of gang members in a few seconds, death is a frequent visitor to characters in this series, and as this is the final season, there’s a distinct sense of inevitability about the sad ends many of the characters must face as their mistakes come back to haunt them and payment for their sins comes due. Between bouts of gunplay and other horrors, however, are quiet moments where occasionally love blossoms, affections are expressed or displayed, or people fight as hard as they can to protect the little pieces of humanity to which they still cling. It’s in such powerful moments that the true wonder of the series unfolds: for all of its viscerally violent impact, it can also move one to copious tears.

Charlie Hunnam has always been the series’ M.V.P. offering the complex Jax wrestling with doing the right thing for his family which sometimes is not in the best interests of his club to whom he’s sworn absolute loyalty. He’s sensational throughout the season as he seeks retribution for Tara’s murder, must work his way out of numerous holes he digs for the club, and inevitably makes moves which he knows it’s his responsibility to carry out. Just watch his final few scenes in the last couple of episodes with Jimmy Smits’ brothel owner Nero and his final confrontation with his mother. This is among the finest acting to be found on the small screen. Katey Segal as Gemma is aces, too, as she tries every trick in the book to squirm her way out of discovery and yet never taking a backward step as she stands up to everyone she meets. Theo Rossi’s three season flight from discovery of his character Juice’s misdeeds comes to an end this season, another satisfying performance with a fine actor playing one of likely the greatest roles he’ll ever be given. Many guest stars dot the season with excellent work. In addition to Annabeth Gish and CCH Pounder, there is Courtney Love as a concerned school teacher, Marilyn Manson as a neo-Nazi prisoner, Lea Michele as a waitress who befriends the fleeing Gemma, Hal Holbrook as Gemma’s father, Michael Chicklis who figures importantly in both Gemma and Jax’s lives, and the return of Walton Goggins as Venus who becomes the surprising favorite of one of the club members.

Here are the thirteen episodes contained on four Blu-ray discs in this final season set:

The program’s widescreen television aspect ratio of 1.78:1 is faithfully presented in these 1080p transfers using the AVC codec. Unquestionably the best the series has ever looked on Blu-ray, there are no anomalies at all with outstanding sharpness in every shot, color that is rich and true with superb skin tones, and contrast which is always consistently maintained. Black levels are reference quality with impressive shadow detail.

The DTS-HD Master Audio 5.1 sound mix is a major step up in surround immersion from previous season sets which have been reviewed. Dialogue has been excellently recorded and has been placed in the center channel. The use of music and blues songs to complement or clarify the emotions and meanings of a scene gets marvelous spread through the fronts and rears. Sound designers have taken great pains this year to make sure that pans across and through the soundstage occur with vehicles zooming through the frame making for a very expansive audio experience.

Carpe Diem: The Final Season of Sons of Anarchy (1:11:39, HD): each of the thirteen episodes for the season is introduced by its director who then comments on the particular challenges for him on that particular episode. Cast members, of course, add comments along the way along with the series special effects coordinators, director of photography, stunt coordinator, as well as executives from FX and Fox Television as well as producers Kurt Sutter, Paris Barclay, and Jim Paré. There are also excerpts from Comic-Con, the season premiere held at the Hollywood theater, and crew appreciation day.

Anarchy Legacy (4:50, HD): producers discuss some of the thriving ancillary products already present for the show as well as some upcoming ones including a new video game, a series of comic books, and a possible prequel series for FX in a year or two presenting the origin story of the club.

Motorcycles of Mayhem (5:11, HD): after a tribute to Harley-Davidson who has been on board with the series since season two, various crew members pick their favorite bikes used on the show.

Tattoo Stories (18:20, HD): the head of the make-up department discusses the various tattoo designs for the characters of Jax, Gemma, Juice, Tig, and Nero. The accompanying actors then talk about their choices for some of those designs.

Some have described its heavily serialized storylines and complex character interrelationships as Shakespearean in scope, and while Sons of Anarchy may certainly contain as much bloodshed as can be found in such plays by the Bard as Hamlet, Macbeth, and Titus Andronicus, rest assured that fans can revel in their favorite show on its own merits. The new Blu-ray release of the final season certainly offers the show in its best possible condition. Highly recommended for those said fans.