The violence and bloodshed accelerates appreciably in the fifth season of Sons of Anarchy but certainly not at the expense of the drama which continues to be riveting and explosive. The heavily serialized storylines, despite dealing with cutthroat motorcycle clubs doing despicable things to often despicable people, continue to grab a viewer and never let go, and once you get pulled into the activities of the SAMCRO chapter of the Sons of Anarchy Motorcycle Club, you can’t not know what happens next. That’s about the best possible praise that can be given to any drama series. 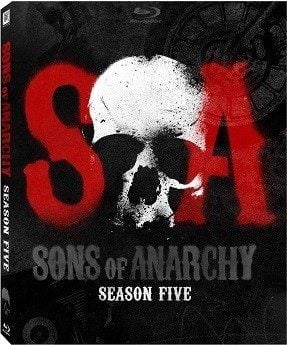 With the club’s president Clay Morrow (Ron Perlman) ousted from the top spot due to a series of indiscretions including murder of a club member and the attempted murder of his stepson’s fiancé (Maggie Siff playing Dr. Tara Knowles) and his (despised) stepson Jax Teller (Charlie Hunnam) now firmly in charge of the club, the Sons are knee deep in trouble from the opening seconds of the first episode. They face extinction by the CIA who are using them to smoke out a powerful Mexican drug cartel running drugs into Arizona and California via the Sons. Black business kingpin Damon Pope (Harold Perrineau) is seeking revenge for the death of his daughter due to an impulsive act by hotheaded biker “Tig” Trager (Kim Coates) in season four’s explosive finale. Sheriff Eli Roosevelt (Rockmond Dunbar) has his hands full with a series of home invasions in Charming, crimes he thinks are tied to the Sons. And Jax’s best friend “Opie” Winston (Ryan Hurst) has abandoned the club when he found out Clay had killed his father and Jax had let him live without retribution (only because the club has an ongoing gun deal with the IRA, and they’ll only deal with Clay).The violence this season is extreme and not for the timid: dismemberments, on-the-spot assassinations, the immolation of a teenager, beat downs to the death with lead pipes and a snow globe (of all things), dog fights and a savage attack by dogs, and lots of brutal fist fights (sometimes involving female cast members) and random murders in almost every episode. Jax’s first year as kingpin of the Sons is indeed a tumultuous affair, but as the season winds its way toward its astonishing conclusion, it’s amazing to see how perfectly suited for the top spot he is with a mind constantly churning and with the diabolical plotting of his maneuvers many moves in advance. Of course, his former plans of his leaving the club in the hands of others and going away with his wife and two boys seem like wishful thinking now, and part of the season’s drama involves Tara’s attempts to carve out a life for herself and her children that takes them away from the always constant danger from the Son’s enemies while staying true to the man she loves.Even more so than in season four, both Maggie Siff and Charlie Hunnam outdo even their heroic efforts in last season’s dramatic fireworks offering breathtaking examples of gutsy acting amid the craziness and violence happening all around them. (It’s shameful that neither received richly deserved Emmy nominations for their work, but the number of potential drama contenders in these leading categories is truly staggering, and the show has never seemed to be on the Academy’s radar.) Katey Sagal has been given more to do this season with a new love interest in Jimmy Smits (as a brothel owner and former gang boss Nero Padilla) while dealing with Clay’s continued fixation on her. Theo Rossi as “Juice” Ortiz gets another great season with his head going in and out of the noose as his hidden secrets are always on the verge of coming out. Harold Perrineau is another standout as big shot mover and shaker Damon Pope. And don’t miss the guest star performance of the season: Walton Goggins as you’ve never seen him before in episode 5.Here are the thirteen episodes which are contained on three Blu-ray discs in the season five set. Names in parentheses refer to the participants on the audio commentary for that episode. An episode marked with an asterisk (*) indicates an episode which can be viewed in extended mode.1 – Sovereign (creator-writer Kurt Sutter, director Paris Barclay, stars Maggie Siff, Katey Sagal, and Dayton Callie)*2 – Authority Vested3 – Laying Pipe*4 – Stolen Huffy5 – Orca Shrugged*6 – Small World7 – Toad’s Wild Ride8 – Ablation9 – Andare Pescare10 – Crucifixed11 – To Thine Own Self12 – Darthy (director Peter Weller)*13 – J’ai Obtenu Cette

The program’s 1.78:1 widescreen television aspect ratio is delivered in 1080p using the AVC codec. As dark and gritty as the storytelling is, the video quality couldn’t be sharper or more detailed. There are outstanding amounts of details to be seen here: in hair, clothes, the grain of the leather vests and jackets, and every scar and bit of ink the bikers sport. Color is realistically hued, and flesh tones are completely natural. In a sequence or two when low light conditions prevail, the image gets a bit cloudy and less distinct in appearance, but it’s a minor inconsistency. Episodes have been divided into varying chapters depending on the length of the episode but generally they run 12 or 13 chapters.

The DTS-HD Master Audio 5.1 sound mix achieves most of its surround presence from the hard-driving music score. For all of the roaring of motorcycles as they speed across and through the frame, there isn’t the same amount of panning across and through the soundstage that one might expect. Most of the sound effects seem more stereophonic than surround in nature. Dialogue has been superbly recorded and has been rooted to the center channel. The numerous gunshots have heft and power thanks to good LFE placement.

Audio Commentaries: The commentary for episode 1 (cast and crew) is the better of the two commentaries as the actors, the writer, and the director discuss their characters and the journey over five seasons. Peter Weller’s rather uninteresting commentary for episode 12 includes too much describing what’s on screen and the character motivations which we’re already privy to while praising the cast and crew to the skies.Deleted Scenes (4:49, 5:40, 4:04, HD): each disc contains montages of deleted scenes from episodes on that disc. Disc one features four scenes, disc two has five, and disc three has three.Gag Reel (4:51, HD)Opie Winston (6:48, HD): a tribute to the character of Opie and the actor who played him, Ryan Hurst, by the show’s stars and the actor himself.Kurt Sutter: Creating Anarchy (3:41, HD): the series’ head writer/creator describes his intentions for each episode to exist as a small indie movie with story arcs which pull viewers intensively through the season. He also mentions plans for the series’ final two seasons.Fan Concert at the Clubhouse (19:29, HD): winners of a fan contest are invited to Hollywood to tour the sets and then enjoy a four-song concert in the biker clubhouse parking lot featuring Katey Sagal and other blues artists.Promo Trailers (HD): FX series, Homeland, The Americans, American Horror Story: Season Two.

With two more seasons of gut-wrenching drama to go, Sons of Anarchy pulled out another top-notch combustible season in its fifth year on the air. With terrific video quality and above average audio on this Blu-ray release, fans will enjoy an immersive drama operating on all cylinders in this set. Recommended!